I have a theory that Indian screenwriters search medical texts for the most bizarre sounding diseases which they then change out of almost all recognition, blend them together and then use this bizarre hybrid as the plot for a film. That might at least go some way to explaining why Vikram (Naga Chaitanya) is introduced as the surviving half of a ‘vanishing twin’ pregnancy, the inaccurate explanation of which is only one of the fantastical medical diagnoses described in the film. That may not have been a bad move if the idea of a separate parasitic twin living through his brother’s left hand was better explored, but Savyasachi doesn’t seem to know if it’s a romance, a thriller or a comedy about alien hand syndrome, and by the end I was no wiser either.

Naga Chaitanya does his best with a terrible script, Madhavan overacts like crazy and it’s not a good sign when the best characterisations come from Vennela Kishore, Bhumika Chawla (who is excellent as Vikram’s sister) and child actor Dishita Sehgal. The other major problem with Savyasachi is truly terrible subtitles which I would ascribe to using Google Translate except that there are many spelling errors. This makes it even more difficult to work out exactly what is going on, when even the actors don’t appear to have any idea. With so much wrong is there any reason to watch Savyasachi? Well, yes. The songs are good, the flash-back and family scenes in the first half are better realised, and even if Madhavan chews the scenery excessively his exploits as a villain are generally entertaining. So not terrible then and given the general incomprehensibility of the subtitles, probably a better watch if you understand more Telugu than I do.

Vikram is the surviving twin while his brother Aditya was ‘absorbed’ into Vikram during their mother’s ‘vanishing twin’ pregnancy. Aditya still lives on as a few neurones in Vikram’s brain and is able to express himself by independent movement of Vikram’s left hand. All this is described in detail by Vikram’s doctor (Rao Ramesh) and his mother Mahalakshmi (Kausalya) which is just as well as this mishmash of a number of different conditions does need a lot of explanation. However, apart from a habit of slapping buttocks and faces, Aditya doesn’t do much else until Vikram is threatened, when Vikram’s left hand suddenly develops uncanny spatial awareness and super-human reaction speed along with the ability to thrash innumerable villains. So, basically the usual hero ability to fight his way out of any given situation. Vikram even manages a bit of hero-style action himself, beating a group of students during a flashback scene at University, with his left hand tied behind his back. Just in case there was any suggestion that Vikram isn’t just as capable as his intangible twin. 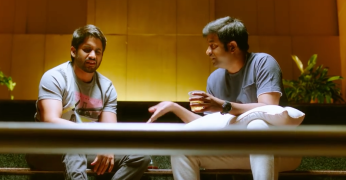 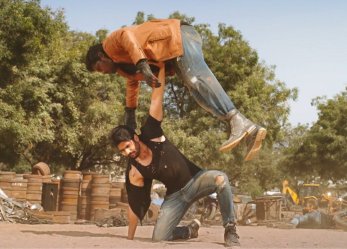 The film starts with a bus crash that causes the death of everyone on board, apart from Vikram, and then promptly ignores this initial mystery for the entire rest of the first half. Instead, writer/director Chandoo Mondeti concentrates on developing a romance between Vikram and businesswoman Chitra (Nidhhi Agerwal), who has employed Vikram’s ad company Artihc to promote her company. Vikram is assisted in making his films by his best friend from school Kittu (Vennela Kishore) and Tenali (Satya) who are aware of Vikram’s ‘vanished’ twin and make allowances for the occasional bizarre behaviour of Vikram’s left hand. 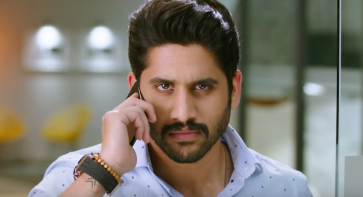 Vikram and Chitra have a history together from their time in college which is shown in a series of flashback scenes. While at college, the two gradually begin a relationship, first as friends, but just as it seems to be developing into something more and Vikram was about to declare his love for Chitra, something happened and he vanished from college, never to be heard from again. Until rocking up to make an ad many years later. Despite this long separation, his sudden reappearance doesn’t generate too much reaction from Chitra, and after accepting Vikram’s rather lame excuses for dropping out of touch, the two rekindle their old romance. There isn’t much chemistry between Vikram and Chitra, but to be fair they don’t have many scenes with just the two of them together, and there is a fraction more sparkage in the college flashbacks. In fact, most of the actual romance happens during M.M. Keeravani’s catchy songs.

The first half also deals with Vikram’s relationship with his sister Siri (Bhumika Chawla) her husband (Bharath Reddy) and daughter Maha (Dishita Sehgal). This part of the film is better, and the family dynamic is well developed as Siri becomes annoyed and objects to Vikram spoiling Maha, allowing her to do whatever she wants, while at the same time appreciating the reasons behind her brother’s affection for her daughter. Bhumika Chawla is excellent as Siri, particularly in later scenes as her character has to deal with a considerable amount of complex emotion.

After all the family background and romance in the first half, the second half of the film totally shifts gear when Vikram returns from a trip to America to find his family has been targeted and his sister in hospital. Suddenly the pace picks up as Vikram struggles to find out who is attacking him, and what has happened to his family. Madhavan is rapidly identified as the villain here, but he plays Arun Raj with such cheerful bonhomie that it’s difficult to take him seriously. Arun also has an oddly weak reason for his behaviour that further undermines his villainous stature, so in the end I felt little investment in the outcome of their struggle. However, Arun does have uncanny ability to be able to find and follow Vikram which is explained by various cloning, cloaking and other electronic wizardry, which at least is slightly more probable than Vikram’s pop-up twin brother’s abilities.

Although the story struggles to keep everything moving forward together, the action sequences work well and there is plenty of energy in the confrontations between Vikram and Arun. While Vikram’s rogue left hand does take over for most of these scenes there is enough variety and challenge to keep them interesting, at least until Arun runs out of disposable henchmen to throw at Vikram. Chaitanya does well to keep his character even vaguely on track, but the uneven mix of comedy, action and paranormal doesn’t blend well, making Vikram appear like a fish out of water for much of the second half. Madhavan’s Arun is too one-dimensional to be anything other than a caricature and his scenery chewing plays into the cartoonish nature of the character. However, Arun is entertaining even if he doesn’t appear particularly villainous and the interactions with his servant (Thagubothu Ramesh) are amusing. On the other hand, Nidhhi Agerwal has little to do and really is just ‘the love interest’ while Vidyullekha Raman and Vennela Kisore play their usual type of characters proficiently and effectively. 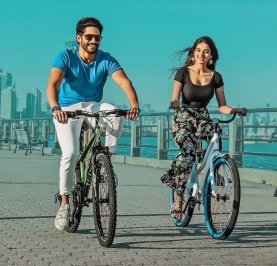 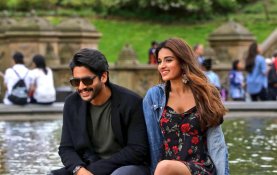 I really liked Chandoo Mondeti’s previous film Karthikeya which had a much better mix of action and supernatural, but Savyasachi just doesn’t have a strong enough story and the various side-plots detract too much from the central action. This could have been a better film if the story had stuck to the idea of alien hand syndrome with a better realised villain or a more involved romance rather than trying to add both. This is one probably better watched on DVD or Netflix when you can forward past the slow and confusing set-up and get straight to the action.