Mani Ratnam’s latest is a surprisingly conventional crime drama that pits three brothers against each other as they vie to take over their father’s gangster business. Unusually there is little character development for each of the brothers, so it does take some time to become connected to the film and get to grips with exactly who is who (and who is sleeping with who). However, the finale is excellent and does keep you guessing right up until the end, while Vijay Sethupathi, Arvind Swami and Jyothika are all superb throughout.

Prakash Raj plays the ageing gangster Senapathi who survives an attack by two assassins dressed as police officers at the start of the film. His wife Lakshmi (Jayasudha) is also in the car, and it’s interesting that their conversation prior to the attack mentions Sena’s infidelities rather than introducing the family members or focusing on the crime empire. However, it’s not until the end that this and other snippets of information come together to make a satisfying whole and many of the seemingly throwaway statements are much more revealing than they initially seem. 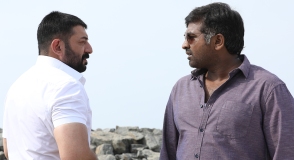 Sena’s three sons all return home as their father and mother are rushed to hospital and it doesn’t take long until they are all at each other’s throats, arguing over who will take their father’s place. The eldest son Varadan (Arvind Swami) complains that Sena treats him as just another henchman, when he feels that he deserves better and has the best claim to inherit his father’s empire. The middle son Thyagu (Arun Vijay) lives in Dubai where he spends most of his time on a yacht discussing real estate projects with wealthy Arab backers. He seems to be more a businessman than a gangster and his stylish dress and polished wife reinforce that impression. The youngest son Ethi (Silambarasan) is a drug and gun runner currently based in Serbia and definitely at the bottom of the pecking order, a fact he seems to accept without too much rancour.

None of these men appear to have what it takes to run a criminal network as they indulge in petty arguments and spiteful digs at each other. Each has their own flaws that seem to disqualify them for the top job. Varadan is the most like his father but he lacks initiative and follows a predictable and well-trodden path as he pursues his father’s attackers. Varadan immediately accuses his father’s rival Chinnappadasan (Thiagarajan) of being behind the attack but it seems to be the easy option and doesn’t require Varadan to be anything other than the thug he has always been. Thyagu is slick and more polished, but despite his cutthroat business skills, he seems to lack the violent mentality needed to maintain control over the motley collection of gangsters so, despite his egotistical belief that he is the obvious choice of heir, he seems unlikely to survive long in Chennai. Ethi is unpredictable and erratic, and doesn’t seem to have the necessary concentration span to be able to successfully run a crime business.

Rasool (Vijay Sethupathi) is Varadan’s childhood friend, and the two have remained close over the years despite Rasool being a police officer. At the start of the film, Rasool is suspended from the police force for an overzealous attack on a student, so he has plenty of time to help out his friend while attempting to get his suspension overturned. As the brothers squabble amongst themselves, Rasool is always there to help keep the peace, just as long as he stays off the alcohol. 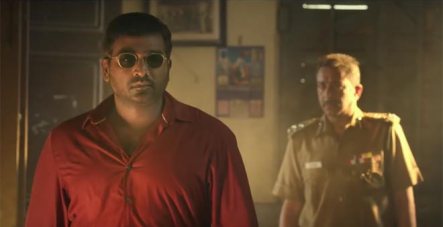 Varadan is married to Chitra (Jyothika) who is loyal to her husband despite his affair with TV reporter Parvathi (Aditi Rao Hydari). She’s an incredibly strong character who seems determined to hold the family together through the sheer force of her willpower alone, but when the brothers finally descend into open warfare all her support is with her husband in spite of everything he as done. At one point I was hopeful that Chitra was going to turn out to be the last one standing, but alas that wasn’t to be and she stays true to her character until the bitter end. Thyagu’s wife Renu (Aishwarya Rajesh) is less supportive of her husband, particularly when she ends up in jail after drugs are hidden in their apartment, while Ethi’s shortlived romance with Chaaya (Dayana Erappa) seems to only be included to act as the catalyst for his later suspicions when Chaaya is shot and killed on their honeymoon. 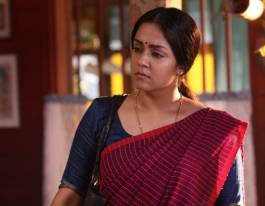 Initially the brothers unit in their search for the men behind the attack on Sena, but after Sena’s death it turns into a free for all as Ethi and Thyagu team up in opposition to Varadan, while accusations fly as to who was the real culprit behind the assassination attempt. Chinnappadasan is also out for blood after the brothers target his family and kill his son-in-law while the police have also vowed not to stand-by and let the gangster take over the city. The death toll rises inexorably as the brothers get closer and closer to finally determining who will take Sena’s place as head kingpin and their various rivals also close in for the kill.

The problem here is that for most of the film the brothers are only lightly sketched and we don’t know why they have chosen to act as they do. The women in their life are even more broadly drawn with just enough detail to know who they are and how they relate to Sena and his sons. There is a daughter as well, but she appears only briefly during the celebration for her new baby and I didn’t even manage to catch her name. This lack of any real motivation for the brothers makes it difficult to relate to their characters and, since none of them are particularly likeable, it’s also hard to decide who to support in their struggle to take over the top spot. Some of the support cast also appear to be completely superfluous, and it’s not until quite late in the story that the reason for the inclusion of, for example, Parvathi or Chaaya, becomes clear. But once the final twist in the tale is revealed, suddenly everything makes more sense, and many of the scenes with Lakshmi, Chitra and the others take on a deeper meaning. As too does the squabble between the brothers, and that ensures Chekka Chivantha Vaanam is a much more intriguing film than it first appears.

A.R. Rahman’s music threads through the screenplay with different themes recurring as the characters come and go, and the songs mostly occur in snippets over pieces of the action. Santosh Sivan is in charge of cinematography and does a very capable job, although what is most interesting is what is not shown except in brief glimpses, almost too fast to catch. In keeping with the twist at the end, the final images of Rasool and the three brothers in a circling jeep at the top of a cliff are the most stunning. The ground is a rich red, while the sky is a vibrant blue and the sea a restless azure, making a vivid contrast between the stark but grandiose scenery and the petty, backstabbing action taking place in the jeep. 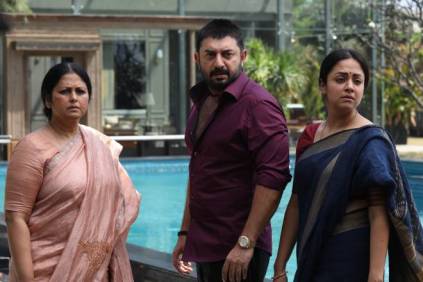 This is a film that I want to see again now that I know the ending. I suspect that there are clues scattered along the way although on reflection I can only identify a few, and I know that more will becone clear on a second watch through. I also didn’t catch the music as well as I should as I was concentrating too much on the action. The actors too appear much better on looking back, as the whole point of that lack of characterisation and interaction is only revealed at the end. It’s hard to say much without revealing the final twist but it’s the end that does make Chekka Chivantha Vaanam well worth watching and overall one of Mani Ratnam’s better films, despite the initial slow build.