Anushka carries Ashok’s hodgepodge of horror and suspense, reinforcing her credentials as a leading actress. While the concept is good, the visuals are (mostly) impressive, and the cast is strong, the pacing is a little off and Ashok is heavy handed with the “twists”.

In an attempt to stymie man of the people Minister Eswar Prasad (Jayaram) in his path to the CM job, hard nosed Vaishnavi (Asha Sarath) and an ACP with convenient ethics (Murali Sharma) are told to get the dirt. Eswar’s former secretary, IAS officer Chanchala (Anushka), is serving time for killing her fiance who just happens to be the ACPs younger brother. She is taken from her cell for an unofficial interrogation and relocated to a decrepit old mansion in a spooky forest setting. What could possibly go wrong?

Chanchala and Vaishnavi play cat and mouse as Chanchala insists she is answering truthfully while not saying what Vaishnavi wants to hear. But after the interrogation sessions, Chanchala is confined to quarters with only the work of the VFX team to keep her company in the mouldering splendour of Bhaagamathie’s palatial home. And who is Bhaagamathie? Local legend says she is a demon, history may indicate she is a queen who trusted the wrong person, or is she just a figment of Chanchala’s imagination? Is Chanchala haunted, mad, or possessed? Murali Sharma (whose character name I forget) wants Chanchala dead and is quite happy to see her suffer at the hands of unknown possibly demonic tormentors. Comedy officers played by Prabhas Sreenu, Dhanraj and Vidyullekha Raman bumble around and add credence to Chanchala’s claims of supernatural goings on. What is really happening in that house? And if Chanchala is playing at being mad, what is her end game? 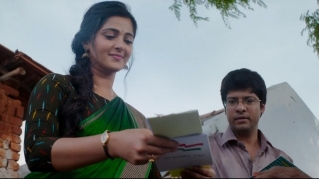 Anushka takes everything in stride and delivers a superb performance. Ashok throws in some Arundhati references, but Chanchala is a different woman. She is rational and curious, and goes looking for what caused that bump in the night. She knows the game the CBI is playing and will not perjure herself just for her own freedom. She is strong and ethical, and people maybe should have paid more attention to that facet of her character. Her fear and determination to survive are palpable. There are times where Chanchala seemed to be playing a game with her captors and I genuinely didn’t know what to believe, was she duplicitous, or you know, possessed and innocent. I was impatient to get back to Chanchala when she was not on screen. Whether you believe her condition is spiritual, psychological, or fraudulent, Anushka’s performance packs a wallop.

The supporting cast is strong but most of the roles are cookie-cutter and have no subtlety or sense of inner life. Jayaram is too good to be true as the people’s pick. Murali Sharma does well as the conflicted cop, but his character is written with little ambiguity so there is not much tension when it comes to crunch time. He does what the script needs, not so much what his character’s past actions might have indicated up to that point. Asha Sarath is strong and Vaishnavi is a good foil for Anushka but again, Vaishnavi is following the demands of the plot and sometimes they forget to write her brain into key scenes. It was nice when it made a come back. Unni Mukundan appears in several flashbacks as Shakthi, Chanchala’s murdered fiance. He was fine, but again his character was written to do things to fill a gap in the plot so he was limited with what he could bring to the table. Thalaivasal Vijay plays a character that surely had to be a reference to the doctor in Chandramukhi or Manichitrathazhu. And then he disappears, never to be mentioned again.

While the visual design is excellent and the atmosphere really works to add a sense of mystery and creepiness, Ashok messes up the pacing of some of the revelations and the logic doesn’t always bear scrutiny. He seems to prefer to show and tell and show again rather than assuming his audience has seen the same movies he has or that they can follow the breadcrumbs and reach their own conclusion. There are nods to Manichitrathazhu, Arundhati, the Usual Suspects, but not all are seamless or successful. The first half is all about building the supernatural element and reinforcing Chanchala’s status as a murderer. Then when she is finally removed from the scene after a night rich in incidents and mayhem, there is a sudden shift. The supposed revelations come one after the other and there is no time to absorb and reflect back on the prior events and reset your expectations before Ashok throws in another twist and shows all the details. But for all the surveillance technology and supposed experts observing via CCTV, nobody asked the same questions I was asking myself. A flaw in the writing, or was I really destined to be a highly successful filmi villain?

Thaman’s soundtrack is mostly confined to adding loud dramatic underscoring, just in case you didn’t realise you were supposed to be scared. Or maybe to let the audience know they should terminate their very loud phone conversation and pay attention to this bit coming up. In deference to this genre, there was only one duet and no big musical production numbers.

I enjoyed this for the way Ashok built his film world, and for Anushka tearing it up. I don’t think anyone could be genuinely completely surprised by the twists and turns but the journey is largely entertaining. With a couple of good minor “Boo!” scares into the bargain.