A law was passed in 1988 allowing all objectionable books to be collected and burned. The Media Betterment Committee was formed to remove from circulation all books that contained banned subjects, or books that could be blamed for crimes committed by people who had read them. Librarians were the last line of defence against this censorship. Sounds a bit dull, doesn’t it? Only the Media Betterment Committee has an armed force at the ready to go and retrieve banned books. It is not often that you hear a line like “Libraries are dens of iniquity. You must pay for your sins.”

Sato Shinsuke’s film isn’t all about censorship or government corruption and hypocrisy in a dystopian alternate history. It’s also an action packed romantic comedy. The MBC initiate a mission to retrieve secret documents that would reveal the illegitimacy of the law that empowers them. The Library Defence Force protects the high security library facilities and safeguards the collections. The documents have been bequeathed to them, and they know that getting them back to the library will be near impossible. Both teams are armed to the hilt, but only one side shoots to kill. One character says something along the lines of “If a government burns books, next they’ll burn people”.

Instructor Dojo (Okada Junichi) is intense, a consummate professional, and not very tall. Okada is excellent in a fairly stoic role. His fight scenes are crunchingly physical and despite being the butt of many short jokes, Dojo is the alpha male in this crew. He is in charge of new recruits, putting them through a punishing training regime and conducting classes on the history and laws that frame the conflict with the MBC. He also seems to have an intense dislike of Kasahara Iku (Eikura Nana), the first female in the elite Task Force. Okada has a nice touch with the comedy scenes and his squirming reaction as Dojo hears himself described by Kasahara at her selection interview is hilarious. He gives the cynical Dojo a weary vulnerability at times along with his obsessive drive to defend the books. 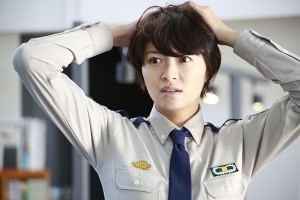 Eikura Nana is the enthusiastic but klutzy Kasahara. She was inspired by a Library Defense officer who came to her aid during an MBC book raid. She never saw his face but he changed her life.

She joined the force to try and find that ideal man and to be just like him (guess which him!). At first I was a little irritated by the scenes that repeatedly highlighted her incompetence and inability to keep up with the guys. But it emerged that brilliant technical skills might not be the only qualification for the job. Knowing what was right and putting yourself on the line to do it was as powerful in some instances. Eikura is charming and portrayed her character as impulsive and warm, with a sturdy resilience that kept her from giving up.

Her sparring with Dojo and fellow recruit Tezuka was sometimes harsh, and I was a bit put off by the institutionalised bullying and the macho BS. But Dojo challenged Tezuka to be honest about why he was picking on Kasahara. He also reproached himself for not being strong enough to trust her, and for impeding her career because of his own weakness. Kasahara became a more valued individual and earned her place on merit. It’s still a man’s world but she made her own place in it. 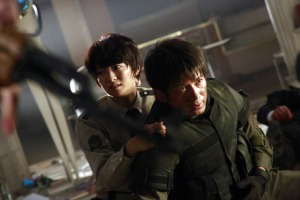 Despite all the action and violence, this is often a very funny film. Characters play it pretty straight and lines like “The commander’s leg is transmitting” had the cinema audience in stitches, as did the librarians shushing each other while they gossiped. Okada and Eikura have a nice dynamic. Dojo and Kasahara’s relationship starts as just a student and (demanding and surly) teacher but develops and becomes more personal as they understand more about what drives each other. She brings out his vulnerability (which freaks him out) and he makes her realise that the LDF is no game and she needs to focus. When Kasahara says to Dojo that her ambition is to be as good as him he is touched.  Then she pauses and adds, “Or better”. Their reactions and the pace of their dialogue bring a lot of the heart and the humour into the story.

Tezuka (Fukushi Sota) and Shibasaki (Kuriyama Chiaki) are Kasahara’s rival and best friend respectively. They provide the outlet for less formal commentary and venting, and allow Kasahara’s comedic bumbling to the fore. Both actors do well with quite one dimensional roles and make the most of their big scenes. Tanaka Kei is lots of fun as Dojo’s sidekick Komaki. He respects his boss but has zero reverence and his ribbing and knowing expressions are a hoot, leaving Dojo exasperated and with nowhere to go.

The combat scenes are full on, from the hand to hand fighting to the massive scale gun battles. This is a military style conflict and essentially the MBC and LDF are at war. The LDF are to defend only, and the tension in their ranks as they wait, knowing what is coming, is palpable. Kawazu Taro’s cinematography is excellent at drawing us into this bureaucratic and dangerous world,  and the film makes the most of both technology and skilled actors and stunt performers for the action sequences.

I read reviews criticising Library Wars for not being enough of a message film, but I think the censorship and public apathy theme is strongly presented and integrated into the storyline of Dojo and Kasahara’s relationship. The romantic elements were more about idealistic love than actual entanglements but the growing closeness of several key characters makes it easier to invest in the conflict. The film ends on a positive but open note, perhaps signalling future adaptations of the remaining novels in the series.

I found the subject and the characters engaging. The cast are good , especially the leads Okada and Eikura, and the warmth and laughs were a nice foil for the mayhem and destruction. Worth a watch, especially if, like me, you remember reading Fahrenheit 451 in primary school and thinking that was a fantasy.