Despite the promise of subtitles, Singham II turned out to be another ‘adventure without subtitles’ in Melbourne.  Possibly not such a bad thing as there was so much happening on-screen, I’m not sure that I would have had time to read them anyway.  However, director Hari keeps the basic plot the same with a dedicated cop determined to clean up Tamil Nadu and a number of characters from the original Singham reprise their roles.  The addition of Santhanam, Hansika and Mukesh Rishi among many others to the cast mainly adds more mayhem into an already packed storyline but although there is an apparently limitless cast of characters, it’s still Suriya’s movie all the way.  Singham II is relentless, overlong and frequently over dramatic but there are some excellent fight scenes and Durai Singham’s determination and energy help keep the film from dragging. 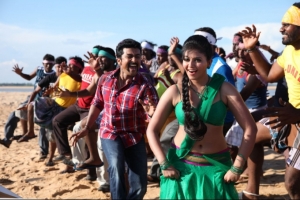 There is a quick run through the significant moments of the first film, reminding us that Durai Singham (Suriya) had resigned his position and under the aegis of the Home Minister (Vijayakumar) was heading off undercover to Tutricorn charged with investigating arms smugglers in the area.  So after a run-of-the-mill item song with Anjali, the film starts with Durai Singham working as some sort of an instructor in a local school.  I’m not exactly sure what his role was but it seemed to involve students and a lot of marching but not much else, which at least gives Singham time to pursue his undercover mission.  He also indulges in a little investigation when one of the students breaks in to look at exam papers early.  It’s the first time I’ve ever seen a contact lens used as forensic evidence in a film and I really hope I see it again as I never realised you could learn so much from a discarded lens!

Meanwhile at night, Singham is scouring the shore looking for smugglers.  But since the local police seem to be in cahoots with the gangs he doesn’t have much success.  I was happy to see one of my favourite bad guys Rajendran pop up, especially since he spends most of his time manically unloading illegal goods from a ship and then hurriedly reloading it all again when he’s tipped off about the possible police presence.  He’s funny and yet still menacing, and employs a fighting style which seems to be all elbows and knees but is still surprisingly effective. 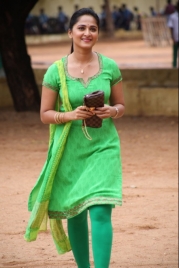 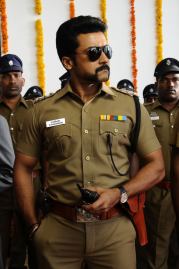 Kavya (Anushka) is still chasing after Singham and trying to organise their wedding which seems to have stalled since he gave up his role as a police officer.  However apart from appearing in the songs she doesn’t have much to do and trying to fit her into the storyline makes the film even longer.  Another unnecessary addition is Hansika as Sathya, a school student who is in love with Duria Singham.  Sathya stalks Singham, which could have been an interesting role reversal, but there never seems to be any point to her unrequited love.  Even her connection with one of the villains of the story isn’t played on to any great extent until near the end, although that could just be because I didn’t understand the dialogue.  Although Hansika looks much too old to be a school student, she is much better than usual and plays her role with restraint, but her character just doesn’t add anything to the story.

As if two romances and all the action wasn’t enough, Hari also adds in a number of comedy tracks featuring Santhanam and Vivek.  I found Vivek annoying in the first Singham, but he is more restrained here and doesn’t have as much screen time which makes him slightly more bearable. He’s also more of a genuine character with most of the one-liners seemingly given over to Santhanam who at least is very funny (even without understanding the dialogue) as the school caretaker Sussa. 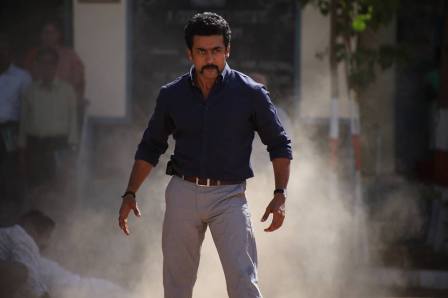 One of the main problems with Singham II is the sheer number of villains that Hari throws at his hero.  Bhai (Mukesh Rishi) is a smuggler and drug dealer who has a gang of accomplices that Singham has to wade his way through before he can get to the top man.  Similarly Thangaraj (Rahman) is a more sophisticated smuggler who uses his shipping company as a front but also has his own gang of thugs who need to be dealt with.   And finally there is their supplier Danny (Danny Sapani), an international drug dealer who spends most of his time sailing around the Indian Ocean indulging in various forms of vice.  This included killing a police man who was supposedly Australian but the dubbed accent was so bad that I didn’t even realise the actor was supposed to be speaking English! 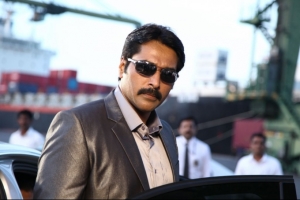 The inclusion of so many antagonists means that there are seemingly endless fights against different groups of thugs and never-ending schemes and counter schemes to deal with the gang leaders.  While Bhia, Thangaraj or Danny by themselves would have been effective enough, with all three the threads become entangled and the plot starts to get both confusing and repetitive. The comedy and romance even comes as a bit of relief from all the action!  The fight scenes though are well choreographed by Anal Arasu, with the best being also the most nonsensical when Singham throws away his gun in order to fight unarmed in the rain outside his parents’ house. It’s pretty stupid, but great fun!

There isn’t too much ‘angry Singham’ in the first half, but after he puts his uniform back on, Singham gets progressively more and more enraged as he systematically sets up and destroys each of the gang leaders and their various minions.  It’s not as effective as in the first film because there isn’t the mutually antagonistic relationship between Singham and Prakash Raj’s Mayil Vaaganam which made their vitriolic exchanges so fiery.  However Suriya is still convincing and carries the film despite the long and overburdened storyline.  He does have good chemistry with Anushka and both look great together in the songs.  Although the music (Devi Sri Prasad) isn’t memorable, the choreography seems better than in the last few Suriya films and his dancing is excellent.

There is just so much of everything in this movie and it does get rather wearing   Fewer villains and a harsher hand with the editing would make it much better but it’s still worth watching for Suriya, better than usual choreography and plenty of excellent fight scenes.