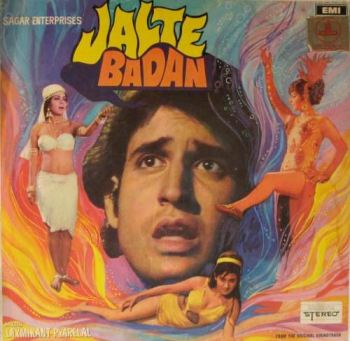 Once again, I was sucked in to buying a DVD based on the cover. This time it was the bold quote above the title that said “Picture has a moral…” But I was finally motivated to watch it by Memsaab Story’s excellent and very funny review. What a delight – Jalte Badan is so wrong it has to be right. Ramanand Sagar subscribes to the ‘more is more’ style of direction, and he is not stingy with the sequins, drama, emotion and ridiculous consequences.

Kiran and Ganga (Kum Kum) meet when he shoots a bird and she tells him off, waving the poor red paint splattered pigeon in his face for emphasis. Stunned by her compassion or maybe her tiny outfits, he falls in love. She is swept off her feet by…um. I don’t really know. His forlorn puppy face. Or something. 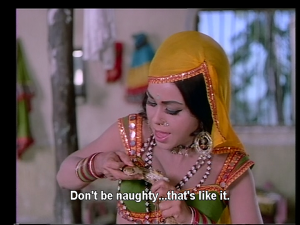 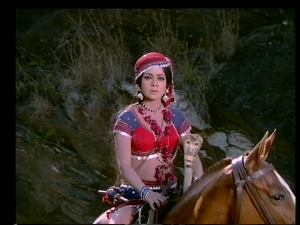 Ganga lives with her father and an assortment of snakes, including her brother and favourite accessory, Ganesh. 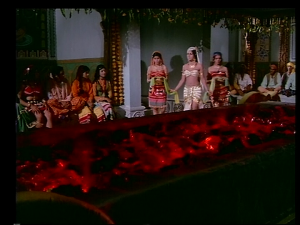 But the youngsters cannot get married and live happily ever after just yet. Ganga endures a trial by fire to prove her purity and to save her father’s reputation. Her dad didn’t actually want her to do that which I found pleasing. But the Snake God and propriety must be appeased so she prances about on hot coals, waving some very synthetic and flammable looking scarves.

Kiran goes to college and attracts the ire of the groovy students who don’t want to be shown up by a tall skinny nerd. He was already headed for trouble though – Malti (Padma Khanna), local nautch girl also relocating to Mumbai to pursue business opportunities, had her fabulously made up eyes on him. 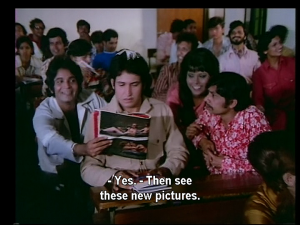 All the women seem to resent his declared love for Ganga and set out to prove that he cannot be in love, as men never really are (they say). It’s silly and a bit unpleasant as the girls are quite strident and pretend feminism is doing what a man would do. But mostly it’s ridiculous. Malti is outwardly a cynic but she respects Kiran’s steadfast love for Ganga even as she tries to prove it is false. She is a softy under all the bling, spare hair and eyeliner. Despite his goody goody intentions, Kiran takes to iniquity like a duck to water.

Kuljeet (Kuljeet) is a sleazy sidekick to the Boss (Manmohan), Malti’s employer and owner of a club designed to get the kids drugged, fleeced and blackmailed.

They take advantage of Kiran’s complete inability to say no to anyone or anything. From then on the film is a parade of Kiran’s drug faces and poor decision making. 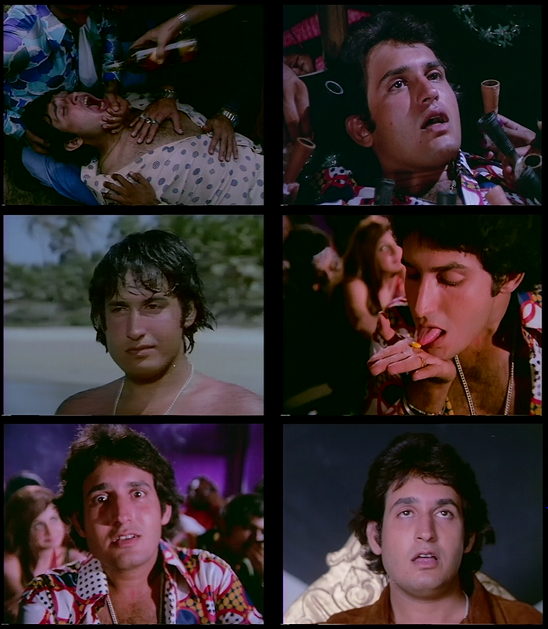 Ganga and Malti are feisty and foxy B movie ladies, much more fun than any simpering good girl heroines. Both love Kiran and in their own ways do what they can to free him. Ganga comes to town to find him and is also lead to Boss’s lair. 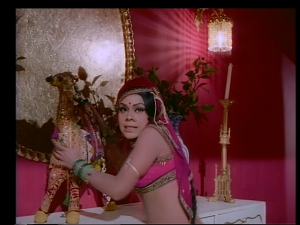 Where her snake clears the dancefloor, and she kicks the bejesus out of the boss. Her snake bhai Ganesh gives his life to save her which made me sad. A note on Kum Kum and the snakes – she is fearless! I know the snakes were probably defanged, but Ganesh (lead snake) often lunges at her and she never flinches, often making it seem like part of the scene. I would not have maintained my sangfroid in such circumstances. 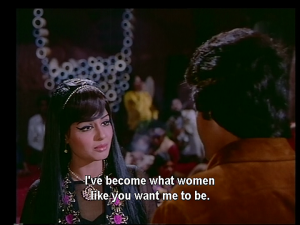 Malti also takes things into her own hands and decides the Boss and the Boss’s Boss are not her kind of people after all. It is Ganga and Malti that eventually save the day and save the gormless Kiran. 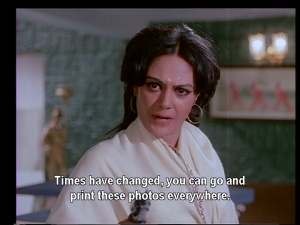 Girija (Alka) is a peripheral character but awesome. She is sold to the Boss by her addict brother and finds herself in the Pink Rape Room, the unwilling star in the Boss’s latest film production. She escapes after turning the tables on her ‘co-star’, and is then threatened with blackmail. Girija coolly tells the Boss that she doesn’t give a rats and he can publish the mildly indecent pictures of her if he wishes.

Almost no one in the film possesses any common sense. Kiran’s own mother (Sumati Gupta) takes him back to the club for an ‘injection’ as she can’t stand to see her son cry. He needs help because he has gone blind from the drugs so I do question the thinking. The ‘only in films’ medicine is quite remarkable. 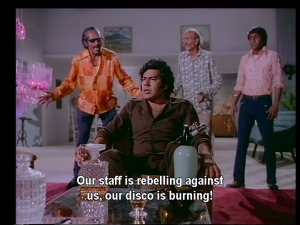 Raza Murad plays student leader Shashikant and looks like he should be sensible. So I was slightly surprised to see him leading a mob complete with flaming torches as that seemed a tad dramatic for a dancefloor invasion. And I was not expecting a speedboat chase.

The Laxmikant Pyarelal soundtrack is groovy and melodic, although I never remember much about the songs. But they add a bit of unwarranted quality and I appreciated the drug freak out item interspersed with Ganga pining away in her (miniscule) virginal white outfit.

Will Jalte Badan change the mind of The Youth about recreational drugs? I don’t know but after looking at the interior design for a couple of hours, I needed a drink! 3 stars!