There wasn’t a lot of information around on Behroopiya – but I knew it was snakey, featured Helen, Faryal, Madhumati and music by Usha Khanna so it had to be worth a look. I watched this on unsubtitled VCD and it was certainly worth the ninety three cents I paid even if I did have to make up half the story. I don’t know why there is so little written online about this film – Rajesh Nanda has delivered a gem!

I’m not sure I have the cast names right as IMDB was little help and the opening credits were not much better. (I was mildly surprised to see ‘Heleln’ makes an appearance.) 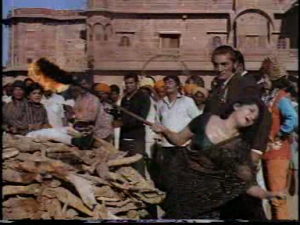 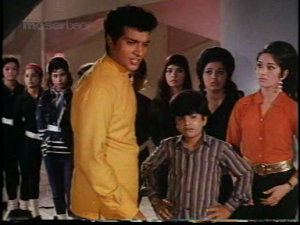 There is a villainous prince Ranjeet (Hiralal), who augments his household staff with an evil guru. His younger brother is the good guy. Ajay (Dheeraj Kumar) is a jack of all trades and seems to spend most of his time hanging around a fitness club, training a gang of schoolgirl ninjas/vigilantes. 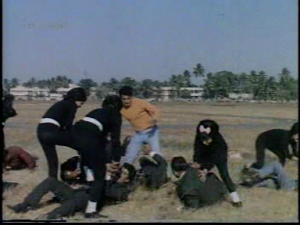 Well, not really ninjas as they do lack speed and stealth, but they make up for it by being well accessorised and are handy in a slow and careful fight sequence. Ajay lives with his sister-in-law (played by Chitra) and her son Bharat (Jr Mehmood). Ranjeet has been in prison, and doesn’t seem at all happy to have his wife and son greet him on release. However, the boy takes a seat in his father’s lair and does his best to disrupt operations. Bharat is a sanctimonious little git so I think he and Ranjeet deserve each other. The prince has a prisoner, a young girl he kept after his plans to molest her mother went awry. Nothing like planning ahead, Ranjeet. 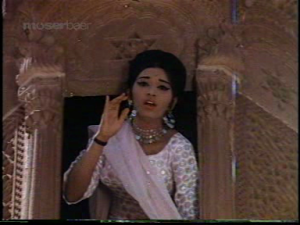 Padmini (Snehlata) escapes one day, only to be rescued by Ajay but then recaptured. Our hero falls for the mystery girl and decides he has to save her and possibly the world. Ajay, master of disguise, teams up with Bharat, master of annoying, to thwart Ranjeet’s plans.

The guru uses Padmini to assassinate folk for Ranjeet. His method is fascinating – he has her bitten on the tongue by a snake and then makes her dance until, in a frenzy, she bites the victim. I like the way Padmini turns blue when she reaches peak venom levels – an excellent visual clue to her victim’s impending fate.

Based on the criteria in the Filmi Snake Spotter’s Field Guide I don’t think she is actually a snake despite the excellent eyeliner and headgear etc. There are lots of mentions of a nagin but I got the impression that they were referring to the snake state rather than her being one. The guru seems to need a milk and venom drink at regular intervals but she is afraid of  the snake so it was a bit confusing. Snehlata’s outfits in the snake dances are excellent and she accessorises quite well when off duty. 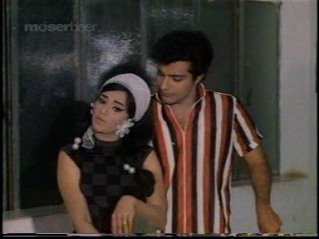 Ajay’s idea of romance includes badminton, table tennis and other endeavours that allow him to wear short shorts or mesh t-shirts or both. 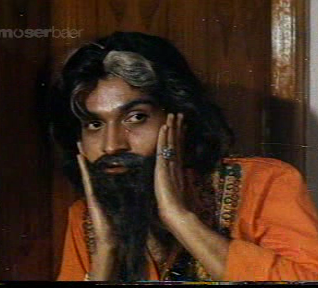 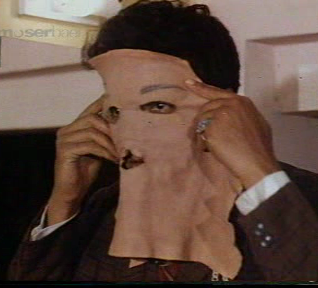 Dheeraj gets full run of the dressing-up box as he impersonates various henchmen, the guru, and even Ranjeet.

Padmini’s brother Ramu (Ram Kumar) and the troupe (which includes Madhumati, Daisy Irani and Faryal) try to rescue her too. They are performers so that allows for lots of dances and sparkly costumes.

There are jumps between scenes and I think it is just to avoid explaining. The attitude is ‘right, let’s keep moving on!”  – e.g Jr Mehmood being thrown from the roof but next seen stepping out of a blanket as though he had been caught, or Jr Mehmood kicking the pilot out of a plane before somehow learning to land it himself or Jr Mehmood humping Faryal’s leg in a fairly inappropriate song before stealing a herd of camels before… Hmmm. Maybe the issue here is Jr Mehmood!

The songs are delightful which is just as well since most are reprised several times. I like this version of Ooi Ma that has Faryal doing what I assume is meant to be a classy item dance for the rich folk while Madhumati and Daisy Irani shake it for the peasants.

The nefarious doings of Ranjeet include such spy classics as “Hello hello Bombay speaking’ secret communications. Lured to Bombay by Ranjeet, Ajay and the ninja gals dance with HELEN!!!! In go-go gladiator outfits!

And to top it off, the girls rescue Ajay from another of Ranjeet’s inefficient assassination attempts.

The performances are not exactly brilliant but they are enjoyable nonetheless. Dheeraj grew on me as the film progressed, although I think he thinks he is rather something. He has a dorky enthusiasm for the silliness, and that makes Ajay amusing rather than insufferable, especially when he ‘dances’. Hiralal is over the top, and makes Ranjeet appropriately revolting. Jr Mehmood is eerily like a scale model Mehmood and quite entertaining even though I wanted to slap his character. Chitra was the weeping wife who will not leave her lying cheating murdering rapist husband so as you may imagine, the Tight Slap Administrator would have been working overtime. 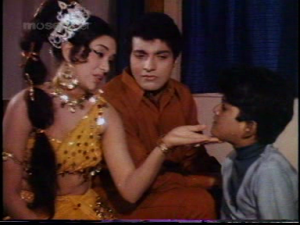 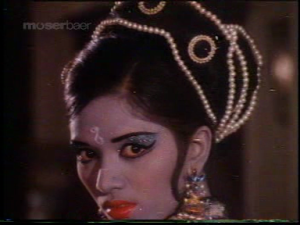 Snehlata managed to look picturesque and miserable as poor Padmini and deliver an excellent Look as required. The ninja schoolgirls were background only but I liked their different characters as evinced through the choice of beehives and bows.

Raja the excellent anipal (and his not even vaguely similar stunt dog) does a wonderful job too.

There are double crosses, disguises, daring stunts, camel chases and buckets of glycerine tears along the way. The film ends in a gloriously mad sequence that has almost certain death, a rescue attempt by the item girl squad and Jr Mehmood in drag, and yet another camel chase. Will Ranjeet triumph? Will Ajay be incinerated? Will any of it make sense? You’ll have to watch to find out. 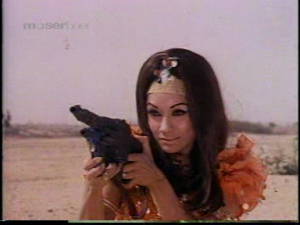