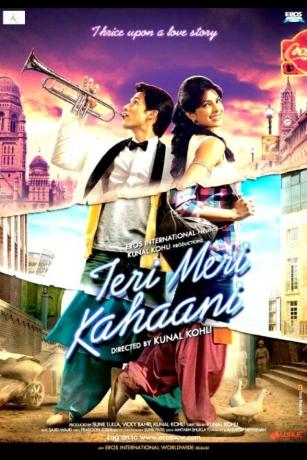 At the opening of the Indian Film Festival last week in Melbourne, Kunal Kohli promised us a simple but funny love story in his latest film, and I think that Teri Meri Kahaani keeps that promise. It’s a shame that he was here with Shahid Kapoor and Priyanka Chopra last week rather than for the world premiere in Melbourne last night, but there was still plenty of anticipation and excitement in the totally sold out theatre. I have to admit that I wasn’t expecting too much from the film given that most recent Hindi releases have been disappointing and yet another love story seemed unlikely to tread new ground. My main hope was that there would be at least one song where Shahid would actually get to dance, but as it turned out there were two great dance numbers, some wonderful costumes and scenery, and the film was really sweet and enjoyable.

Teri Meri Kahaani combines three love stories which all have a common theme but take place in three different decades.  Shahid Kapoor and Priyanka Chopra are the couple who fall in love each time but in all three stories there are complications which threaten to destroy their happiness. There isn’t anything outstanding or even very different in the love stories, but each reflects the era in which they are set and the variation in style keeps things interesting.

The film opens in sixties Bombay and the period has been wonderfully recreated with the help of computer graphics and some lovely rickety old trams. The recreation is explained in the end credits for anyone who is interested and it does looks very realistic to me, although I don’t really have any idea of how Bombay did look in the sixties. 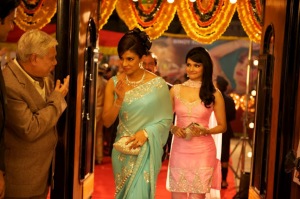 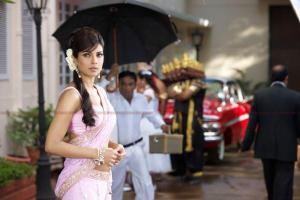 Shahid plays Govind, a musician who has come to Bombay to find a job in the movie industry. Along the way he meets up with the latest rising star, Ruksar (Priyanka) and the two have an immediate connection. While Govind channels Shammi Kapoor and mooches around the studios looking for employment, he also finds time for romance – which in true sixties style he does by means of a song. Watch out for the backing dancers who totally throw themselves into the shimmy and shake!

Apart from the scenery, this whole section does feel very sixties with musical stings and lots of big brass sounds along with the rock and roll. The camera angles recall some of the classic sixties films and Shahid looks very dapper and dashing. Priyanka looks stunning and is a perfect fit as the typical sixties heroine in some very beautiful sparkly costumes. Prachi Desai has a special appearance and makes the most of her short time on-screen, although she really doesn’t have very much to do. It’s all very glamorous and the focus throughout is firmly on the lead couple who exude modern sixties style. But the course of true love never runs smoothly and just before the film moves to the present day, Ruksar and Govind look destined to part forever. 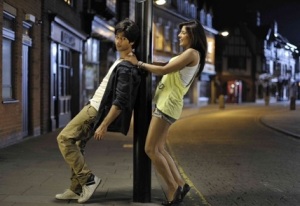 The film then moves to 2012 where Krish (Shahid) is a student based in Stratford-upon-Avon where he meets fellow student Radha (Priyanka) who is on a day trip with friends to the birthplace of Shakespeare. Again the couple have an instant connection and start an online relationship after Radha moves back to Nottingham. There are many, many references to Facebook and Twitter and this did get rather wearing, as surely they could have phoned each other occasionally rather than just sending endless pictures and updates to each other? But maybe that’s just a sign of my age and perhaps that’s really what young couples do these days. This still was the least satisfying of the three stories – Priyanka wasn’t very convincing as a student and neither character had much development beyond the romance. There were various friends of the pair, but they never got to say any more than a word or two to say, and again the story focused primarily on the two leads. Neha Sharma has the special appearance here but doesn’t have much of an impact. On the plus side, I used to live in  Nottingham, and it was good to see different parts of the UK instead of perennial favourite London. 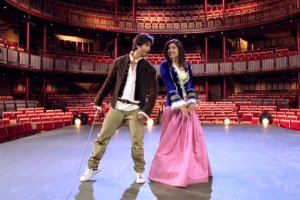 The final story starts just before the intermission and it’s both funny and sad. It’s interesting that Kunal Kohli chose to have his couple studying in England and then immediately follow that with a story which deals with opposition to British rule in India, and features stereotypical heavy-handed English soldiers. It’s such a tired old chestnut and it would be really nice to see this handled in a different way for a change, but instead the British characters follow the usual formula although they do only appear peripherally. 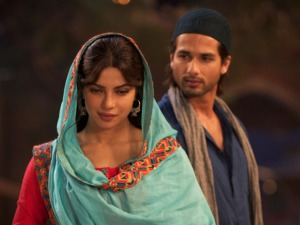 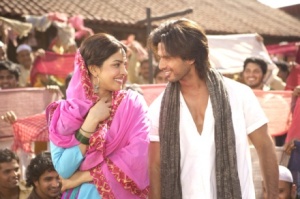 This story is set in a village near Lahore in 1910 and is another change of style and a total change of pace from the previous two romances. The support cast do have more of a role to play here and it helps makes this the best of the three tales with more back story and development of the two main characters. Shahid plays Javed, a womanising layabout who introduces himself as God’s gift to women – literally! He’s a Muslim, while Priyanka’s character Ardhana is the daughter of a local Sikh activist, so already there are problems with the idea of any marriage between the two. Javed has some of the best lines in the film, and while many of them are really corny, the way that he speaks them in couplet form makes them seem funnier than they really are. His appreciative friends add to the humour and even Ardhana gets a few punchy lines as she berates Javed for his unsavoury reputation. Shahid’s costumes here were long kurtas which made him appear very chunky, but the unshaven look and scruffy hair did suit his character, and I liked his arrogant but relaxed manner as Javed. Priyanka again looked beautiful in some wonderfully colourful costumes and was totally charming in her village-girl role. Throughout the film, Priyanka and Shahid had sparkling chemistry together, but it was probably at it’s best and most apparent in these scenes. 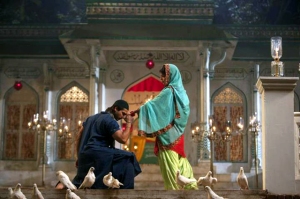 Teri Meri Kahaani’s three love stories seem to hearken back to the films of Yash Raj with their focus on simple stories, lavishly made sets and beautiful costumes – perhaps not surprising since that is where Kunal Kohli started his career. The film depends heavily on the performances of the two main leads and both Shahid and Priyanka deliver, making a convincing couple each time. Sajid-Wajid’s music suits each era and it’s great to have a couple of big dance numbers where Shahid gets to strut his stuff and Priyanka at least looks as if she is enjoying herself. I loved the costumes and the sets and while the film is basically light and fluffy romance it’s cute and funny without being sickly sweet. I am a huge Shahid Kapoor fan and that probably does make me just a little biased, but this is definitely one of his better films in recent times. Kunal Kohli has gone back to basics and it works! Definitely worth watching if you are a fan of either of Shahid or Priyanka or just want a non-taxing enjoyable night out at the movies.