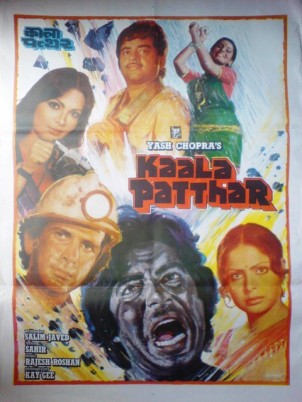 Kaala Patthar is a total masala package that has something for everyone, plus a dollop of social justice. The essential characters are present – heroes, anti-heroes, spirited heroines, eye candy, villains. The main players are outsiders who find themselves caught in the conflict between profit and humanity played out in a privately owned coal mine. There are no surprises in the plot, but some excellent performances give the drama added substance. And director Yash Chopra also provides fights, songs, romance, bromance and dodgy science to complete the masala formula. 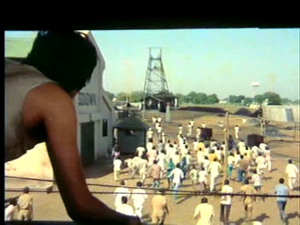 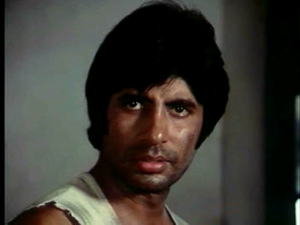 Amitabh is recognisable from the first glimpse of his tall figure and loping stride. Vijay is an enigma, full of smouldering anger and despair as the man trying to escape his past and perhaps make his future a short one. He is educated, and has an uncanny ability to wear white trousers in a coal mine without getting too grubby. The mines were a place to hide as he served his largely self-imposed punishment. A former ship’s captain, he made the wrong decision in a moment of stress and paid the price, although how a private shipping line captain could be court-martialled is never explained. Vijay was with the workers but didn’t consider himself one of them, constantly speaking of their struggle and their lives. He was friendly enough, and is seen to have a smile and a laugh in several scenes, but it is clear this is his own personal purgatory. Time and time again he risks his own safety to prove to himself that he is not a coward. Amitabh’s performance is outstanding, convincing even as he utters the most pompous dialogues. He plays Vijay with compelling restraint and brooding energy. 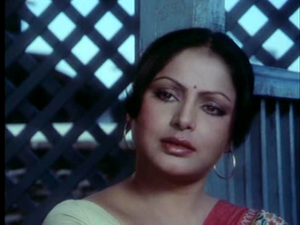 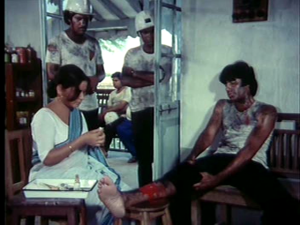 Sudha (Rakhee), the company doctor, is drawn to the educated, articulate miner and he is attracted to her integrity and dedication. They have strong chemistry in their understated scenes alone together even though at times she looks more like his Ma – but perhaps that’s just the caretaker in her character coming through. And Rakhee does look like a mature woman, not a fluffy girly heroine. Sudha and Vijay appear as adults weighing up a future relationship, not kids chasing each other around a park. Sudha seems to have a greater capacity for forgiveness, or at least the understanding that we need to let ourselves off the hook sometimes. 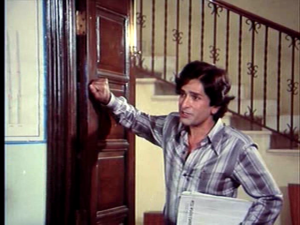 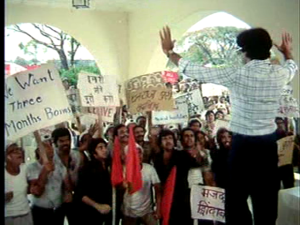 Ravi Malhotra (Shashi Kapoor), the new engineer, is all shiny and action oriented, a stark contrast to the weary and bitter Vijay. Ravi is concerned about the miners but doesn’t seek to be one of the masses, just to manage them in a more humane way. He isn’t all talk – he buys new machinery and makes changes to try and improve worker safety, and forces management to pay a promised bonus. The people rejoice!

I like that the ladies dance neatly in lines and are mostly segregated from Mac Mohan and the rest of the miners who seem to prefer a freestyle approach.

Ravi’s popularity and success irks money hungry boss Puri Dhanraj (Prem Chopra). Ravi is charismatic and the role is a good fit for the charming and articulate Shashi. He has a light but not frivolous energy that helps keep the moralising from bogging the story down. 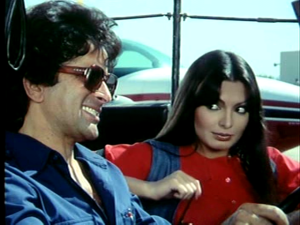 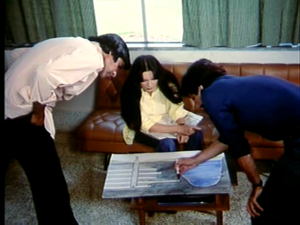 Anita (Parveen Babi) is supposedly an investigative reporter, but if she ever investigated anything more complex than choosing a lipgloss I will be very surprised. She is very pretty but it’s not always enough. Anita writes an article that is highly critical of the privatised mine, and while this annoys Dhanraj, it pleases Ravi which might be Anita’s priority. Although Anita’s character was interesting, Parveen’s screechy acting in the more dramatic exchanges was painful so I was relieved when she reverted to flouncing around the countryside with Shashi. 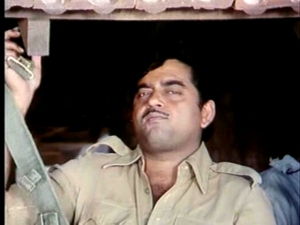 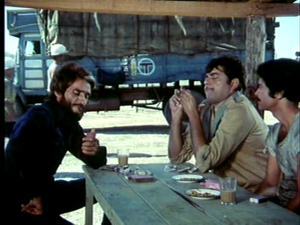 Mangal (Shatrughan Sinha) is an escaped criminal who has taken refuge in the anonymity of the mining camp. I don’t think of Shotgun as a particularly subtle actor and this performance didn’t change that perception, although it is very enjoyable. Mangal swaggers around camp, stirring up trouble and trying to be the top dog. He is bad through and through, until he comes good when it counts. His final scene is totally unbelievable, he overacts wildly, and I don’t think his decision could really have been that helpful, yet it is a perfect masala redemption. 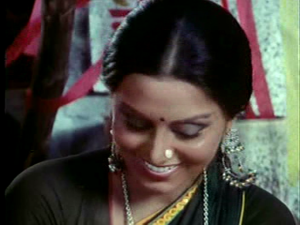 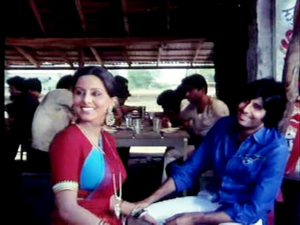 Channo (a radiant Neetu Singh) makes a living selling ornaments and trinkets to the miners and their wives. She is boisterous and bright, and even Vijay responds to her warm personality. She and Mangal have an unconvincing romance and I got the impression that Channo picked him more because he was new blood rather than any real attraction in the first instance. Channo has a couple of significant scenes, and one decision is pivotal. There is a very suspenseful scene where Channo is pursued and almost raped by some ne’er-do-wells from the camp, saved in the nick of time by Mangal. It seemed odd that a girl who knew the area so well would take a lonely path she was clearly a little nervous about, no matter how big her hurry. So while it was dramatic and Neetu was very convincing, it jarred and I wondered if there was a better way for the plot to turn.

Neetu is more than capable of handling the emotional range Channo requires. And her presence means at least one of the female cast can dance!

The supporting actors are excellent. Well, Prem Chopra played the usual Prem Chopra type sleazy villain with no redeeming qualities but he does it so well and he is pretty much the yardstick for that kind of role.  Mac Mohan as card sharp Rana and Parikshat Sahni as Jagga stood out, and it was nice to see Iftekhar in a fleeting appearance. While there is an impressive cast of supporting artists, most of the extras are an anonymous backdrop of the unacknowledged masses. There are some moving scenes of miners waiting in silent vigil outside the house of a dying colleague, or waiting for Vijay as he has treatment. They bide patiently, watching everything and waiting their turn. 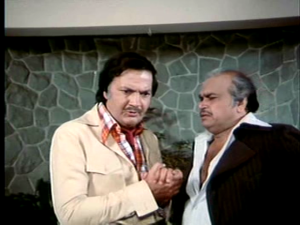 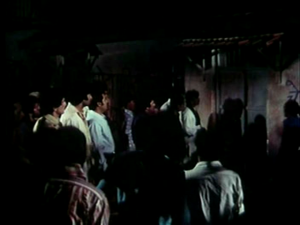 The music by Rajesh Roshan is excellent and while there are only a couple of big song and dance moments, the songs are all integrated into the story and do reveal much about the characters and the environment. Shashi’s entrance to Ek Rasta Hai Zindagi perfectly expresses his nature and the different world he is coming from. Ishq aur Mushq has a bittersweet tone that matches Sudha and Vijay’s burgeoning relationship.

Yash Chopra is a talented story teller, and Salim-Javed’s script is excellent especially the dialogues. The mine is a bleak non-glamorous backdrop that allows the people to dominate. It’s a visually dark film, with lots of scenes in the tunnels or at night, so the performances draw the eye rather than fancy sets or costumes.

I have some issues with the decision making in the final scenes (I suspect that in real life, it would not have been a happy ending if people did what they did but you know, filmi physics and all that), and the set construction team relied a little too much on papier mache but these are small quibbles. You can’t beat Kaala Patthar for excellent character focussed vintage masala,  with the bonus of a fabulous cast. 5 stars! 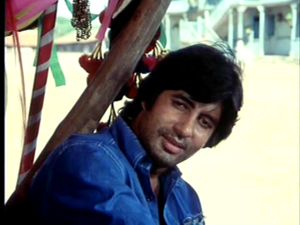 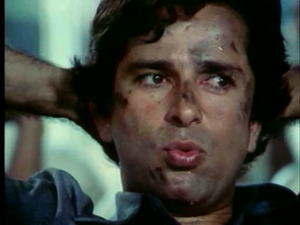 Heather says: Kaala Pathar is vintage Yash Chopra from the days before he got tied up in NRI romance stories and when he was still producing films that were both novel and entertaining. It’s a great story full of action, melodrama and issues of social justice which speeds along to an exciting conclusion. The characters are compelling, and the female actors make up for their limited time onscreen by their impact on the story – softening their male counterpoints enough to allow more insight into their personalities.

I love the way the two leads Vijay and Ravi are introduced, and that their respective characters can be deduced after just a few moments in their opening scenes. Instantly the coal begrimed Vijay is established as anti-authority with heroic tendencies as he ignores the company line and charges into the mine to rescue some trapped workers. It’s Amitabh in his ‘angry young man persona’ and it’s no surprise to learn later on that he harbours a dark secret or that he believes pain is his destiny.  Ravi on the other hand, is immediately recognisable as a ladies man when he first appears via a song, wearing a jaunty cap and sporting a rather fabulous scarf with a motif of large white daisies. Happy and with a more relaxed attitude to life Ravi is idealistic with more socialist views and really not my view of a ‘typical’ engineer. But then again I’m rather prejudiced since I know so many engineers. Ravi’s drawing which demonstrates exactly why mine shaft number 4 is so dangerous is classic Bollywood engineering at work, and his skills in this area may explain why Ravi is working in such an undesirable job.  Shatrughan Sinha turns in a great performance as the escaped prisoner Mangal and allows yet more melodrama to be added to the story.

The various romances are handled in a subtle and subdued way which works well within the disaster movie format and I appreciate the restraint shown here. Rakhee Gulzar is beautiful as the doctor working under such difficult conditions while Parveen Babi gets a chance to show some teeth as the more feisty Anita, and Neetu Singh gets the best moves.  I even like Prem Chopra’s unrealistic and totally villainous mine owner who has no redeeming features whatsoever. It’s all very Dickensian and melodramatic, but so much fun. The story is generally well paced, although rather long, and I felt that the scenes of the inevitable disaster at the end did drag on a little. The mine walls were also a little shaky and I’m sure everyone could escape more easily, if not as spectacularly, if they’d just push the walls aside. Despite the occasional dodgy effects and rickety sets, the disaster theme is well depicted and I was interested to learn that the mine disaster portrayed here was based on real life events at Chasnala. A must see film for sure – 4 ½ stars.