It seems to have been a very long time since the last Telugu film release here in Melbourne, so we were quite delighted to hear that Dhada was showing this weekend. Despite the negative reports, we headed in to the city for another ‘adventure without subtitles’.

The film opens with a parkour chase sequence across, over, around, through and between various buildings, bridges and major highways. It’s very well done with great cinematography and editing, and is an excellent introduction to Vishwa (Naga Chaitanya). He’s just graduating from college in some unspecified city which we think might be supposed to be in the USA, or possibly Russia. It’s hard to tell from the accents of the English speaking cast who seem to be mainly of Eastern European origin but since the cops are wearing US style cardboard badges and US flags we’re going to go with the States.

Vishwa lives with his elder brother Rajiv and Rajiv’s wife Preethi.  He fancies himself as a modern day hero, and cannot help rescuing a tearful girl running from a pack of thugs. In the course of the rescue he manages to set free another 99 girls who were rather conveniently loaded in trucks in the same car park. This doesn’t endear him to local mafia don RD (a wonderfully over the top Rahul Dev), who was just about to close a deal selling the girls (all 100 medically certified virgins) on to white slaver Kelly Dorjee (almost his equal in the over the top evil stakes).

Around the same time Vishwa has spotted, and instantly fallen in love with, Ria the daughter of a millionaire (Mukesh Rishi) who doesn’t have any time for her. She spends her days on a chaise longue in the wine cellar surrounded by bad polystyrene replicas of classical sculpture, either watching old 8mm film of herself and her mother or developing pictures she has taken of parents and their children, and generally feeling sorry for herself. The mother was played by the excellent Satya Krishnan and it was such a shame she only had a tiny role. 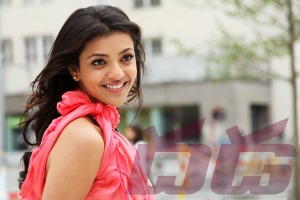 Vishwa has a classy idea of a date which involves taking Ria out on the back of a motorbike, stealing a bottle of wine along the way (drinking and driving and no helmets– tsk tsk!), to a a bare knuckle fight (which judging by the spectators’ apparel seems to occur some time in the early part of last century) and finally to a club based in a ship. Strangely they seem to travel back in time again when a bunch of 1930’s styled shoe shine boys arrive aboard the Titanic styled set to join in the song and dance number, the seriously catchy ‘Telugu Bengali English Marathi’. It was an odd blend, especially with the random and bored looking audience including one beaming Sikh guy. Vishwa and Ria do lots of flirting before he drops her back to her dull party, and her fiancé, two minutes before her stated deadline. Ah yes – the fly in the ointment is that Ria’s father has promised her to Amit, a local businessman with a commitment to shimmery suits, who isn’t impressed at all with Vishwa.

There are more chases and excellent fight scenes as RD’s younger brother closes in on Vishwa seeking revenge for their lost millions in the white slave trade. There is the obligatory twist in the tale as Rajiv reveals his entanglement in the mafia web. There is an excellent flashback scene to the two boys growing up, and we learn that Vishwa has always protected his big brother, sometimes in spectacular fashion.  Ria becomes a hostage and Kajal was good at being unconscious. It’s all up to Vishwa to save the day – can you ever doubt that he will? Would a man lacking self confidence wear so much pink? 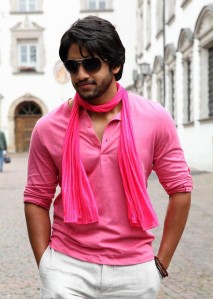 The film looks fantastic and the direction is confident and visually accomplished. The styling is good and both Chaitanya and Kajal look the part. Except one of the hairdressers seems to have a grudge against Kajal and gave her an absolutely terrible fringe. In fact, we suspect we have seen that wig before, when it appeared as The Wig in Shakti. She looks much better in her emo rock-chick look, or Aishwarya Rai wannabe avatar, although losing the blue contacts would have been even better. Vishwa’s fantasy versions of Ria in one song also included Foreman Ria (in hard hat and high-vis overalls), Police Ria and Skanky Carwash Ria so her wardrobe team were kept busy. Chaitanya has a wonderful collection of slightly sparkling superhero and James Bond T-shirts which we were delighted to see he felt were entirely appropriate for day wear.

Chaitanya has developed as an actor, and it’s obvious he has worked hard and really improved his dancing. He handled the demanding action sequences well, and the multiple camera angles and slo-mo replays meant he had to deliver in those scenes or they wouldn’t have worked at all. He does look rather embarrassed by a few of his outfits, but by the time we get to the lilac satin band-leader costume he seems to have become resigned to his fate. The lurid checked lunghi in the final song doesn’t faze him at all but he seems to suffer from Thrust Reluctance.

He’s also committed to the wet look throughout the film, indulging in a number of activities guaranteed to keep him slightly soggy.

Rahul Dev is excellent as the evil RD and his execution of a rival involving a prosthetic leg was rather special. Although Kelly Dorjee doesn’t turn up quite as often he makes up for it by some inspired sneering behind his ever present sunglasses.

But that’s all the good stuff.  The story is weak and the white slave trade link pathetic. The comedy with Brahmi, Ali and various others all falls very flat and mainly involves racist and sexist jokes. It’s all unnecessary and not even remotely funny. Venu Madhav is mildly amusing but totally unnecessary as is MS Narayana. The pace of the first half is too slow as time is spent on laborious set-ups and establishing characters who lacked substance or who disappeared. There were silly errors; in the Super 8 film of baby Ria and her mother, there is someone in shot using a digital video camera. And don’t get us started on Hair Continuity – it was all over the place (literally).

Chaitanya is more amusing in some lighter moments than any of the ‘comedians’ and those scenes suited the masala action style of the film much better. Dhada is style over substance. But it’s worth a watch for the well executed fight scenes and nicely picturised songs from a reasonably appealing soundtrack. Not a great film, but not a terrible one. And if you take nothing else away from Dhada, the phrase ‘Smoking is injurious to health’ became even more ominous.