Punnami Naagu is almost two films in one. It’s as though someone took a deck of cards marked ‘happy animal friends’ and shuffled it with the deck marked ‘a nagin stole my soul’ and voila!  It was an excellent opportunity to apply the principles in Jenni’s Field Guide.  Apologies for the crappy screencaps – the DVD picture is really grainy. And I didn’t have subtitles so I may have made the whole story up.

A local snake charmer uses his snake coercing powers to kill a priest after he had stopped the snake charmer raping a girl. The priest seems to make some dying invocation or curse, and leaves his young son an orphan.

The priest’s son is adopted by the landlord, and I think god sends an elephant to look after him. The elephant is very maternal, making sure Raju eats and washes regularly. It’s all very family friendly and sweet. When Raju moves in with the landlord, naturally his elephant moves in to the luxurious mansion too, and they grow accustomed to the good life. I would have had seizures looking at that decor, but apparently elephants rise above such things. 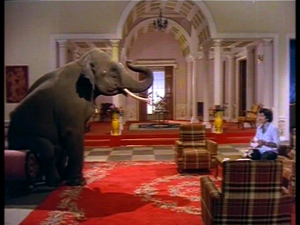 Meanwhile the snake charmer is in less happy circumstances, and his son Naagulu is growing up unaware of the curse that will take over his life. The father is feeding Naagulu snake venom in his food to help him become immune to snake bites, and he is being trained to take up the family business. It is lucky he is immune as his snake handling is a bit cavalier – I’m pretty sure they could fang you through a hessian sack. Nevertheless. 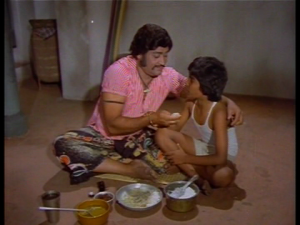 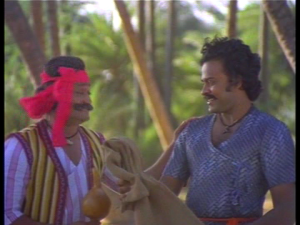 Naagulu’s heavily pregnant aunt has an animal helper of her own – a very useful monkey that assists with laundry and has exceptional empathy and communication skills along with basic midwifery knowledge. When little Laxmi is born, all the main players are set for the drama which is to unfold.

It’s a standard boy woos girl story, as Raju and Laxmi flirt and fight and make up, all under the watchful and slightly exasperated gaze of their animal friends who also help to patch up fights and carry messages. There is dodgy dancing, Narasimha Raju has an exceedingly voluminous coiff, the elephant and monkey are smarter than the humans, and that storyline is all quite cutesy. Laxmi (Rati Agnihotri) is bright and confident, their courtship is energetic and they get all the upbeat songs. Raju’s costumes are entertaining even without a story to go along with – Could his collars have been any bigger, his pants any higher? It’s kind of fun, especially a song and dance involving the couple wearing each other’s clothes. Laxmi does not fit any of the clothing or eyeliner indicators, so I suspected the snake thing skipped her side of the family. 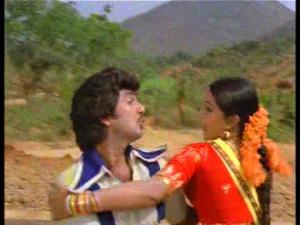 But. The dark side of the film starts to emerge.

Chiranjeevi as grown up Naagulu is unaware that he is slowly becoming more snake than human. There are some annoying comedy snake charmers on the scene, and they perform with a troupe which includes a spectacularly flexible snake dancer in a bejewelled bodysuit. Naagulu berates the performers for using the gift as entertainment. He may not know why,  but he cannot control his response to the snake music. It was easy to pick the real snake here, bedazzled Fake Snake notwithstanding.

As his hormones kick in, the lust aspect of the snake character takes over when the moon is full. So it’s a bad idea when Naagulu falls for Raju’s sister Menaka after saving her from a rampaging roaring bovine. I applaud the enthusiasm if not the ability of whoever did the voiceover for the animal – I have never heard a cow go “Grrrr-aaaaaargh” nor have I heard one oink like a pig so I was very impressed. Menaka manages to be quite saucy even when barely conscious and Naagulu was smitten. 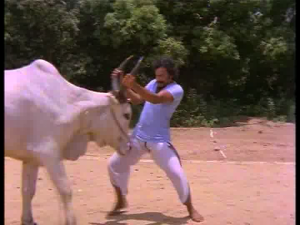 This can’t end well, what with Naagulu being lethal and all. He lures young ladies to a lonely spot, where it is always night and swirling with mysterious mists, and the venom contained in his bodily fluids is fatal to them. They are mesmerised by his snake gaze (blue contact lenses – tick!) and don’t seem to notice his odd mannerisms that echo some snake behaviours. In his human state he has no recollection of these interludes.

Back in Raju’s storyline, Naagulu’s father repeatedly stomps on a baby snake and the local snake deity eyes him with a vengeful glare. Duelling snakes ensue as Naagulu’s dad tries to kill Raju with his snake, and the deity pursues the snake charmer with eventual success.  Naagulu’s dad delivers a deathbed monologue which seems to include telling his son that he can never marry as he will poison any woman he sleeps with. This revelation came a bit late for poor Menaka.

Naagulu inherits a book that seems to explain his condition, but now he knows what he is there is no one to help him. Naagulu is devastated by what is happening to his body. His eyes change to those blue contacts, his skin is shedding, and he seems to be in agony as he sees these familiar but totally inhuman changes. And that’s what makes this a bit more interesting than I expected. It’s a strong performance in what started out looking like a fairly silly film. There is more to Naagulu than just the killing and being venomous, and Chiranjeevi shows the transition from carefree boy falling in love to tormented soul.

A new school teacher arrives in the village, and takes a photo of Naagulu that later proves his undoing. He offers to guide her to the village but the sun sets and his cobra nature asserts itself. When Raju sees the significant photo he confronts Naagulu. There is no real outcome, just a scuffle and then everything goes back to normal. I was struck by another snake indicator – venom. During the fight, Chiru bit a chunk out of a tree, which then appeared to ooze blue ink. Both he and Narasimha Raju looked a bit taken aback by that, as was I. Another thing the book clearly neglected to mention was hunting technique. Naagulu keeps trying to bite Raju’s neck, when I suspect a nip at the fingers that were pushing at his face might have been just as lethal.

Despite the rising body count, Raju and Laxmi are still flirting madly and Raju doesn’t seem to be too concerned about all the deaths. But then Naagulu is drawn to his cousin Laxmi and it all becomes much more dangerous.

Luckily Laxmi’s monkey Anji has a reliable mongoose supply and the peril is averted.

This scene was so strange – on the one hand very silly with a mongoose being thrown at Chiru’s face repeatedly as he emoted fiercely, but also a strong defining point in the character’s transition from troubled man to snake.

Naagulu makes an unsuccessful attempt at assaulting a blind girl – she couldn’t see his mesmerising gaze so escaped. Raju and a mob of villagers with flaming torches (led by the elephant) are soon on his trail. Naagulu reveals he cannot control the snake and has become a monster even to himself. Raju cannot help but feel sorry for him and tries to help. But what monster ever gets a happy ever after? And seriously, could Raju’s collars be ANY bigger?

Rajasekhar’s film gave  a bit more food for thought than I was expecting. The Raju-Laxmi romance was sunny and a good contrast to the Naagulu story. The animals seemed fairly un-stressed, with the exception of the spring loaded mongoose and the sacrificial snake, and their antics were highly entertaining if predictable.  It’s a strange mix but overall, I really enjoyed the characters, the unusual story, and the general WTFery. The only thing missing was a Chiru snake dance. 3 stars!