There is a scene that gets me every time. Shashi Kapoor heartbroken, on roller skates, in a white safari suit, playing the accordion and yodelling (thanks to Kishore Kumar and RD Burman) as he sweeps around an empty skating rink at night. It should be ridiculous and yet it’s strangely affecting. And that sums up my feelings for this fabulous Desai film. Aa Gale Lag Ja is convoluted, goes off the rails at the end and relies heavily on coincidences, but I find it beautiful and touching as well. I recently re-watched it with the the excellent company of Beth and Ira, and couldn’t pass up the opportunity to revisit this masala classic for Kapoor Khazana.

I love the leads, it has one of my all time favourite soundtracks (indeed, it changed my views on accordion solos), and the writing is far more interesting than I expected from a retro filmi romance. And they don’t waste time on building up to a song – they just go for it.

Shashi Kapoor is Prem, a poor but honest roller skating enthusiast. He lives up in the mountains so roller skating, as well as life, is very challenging. The beautiful Sharmila Tagore is Preeti, a minxy medical student.

I appreciate Shashi’s wobbly attempts to skate. It lacks flair, but he is endearingly earnest. Sharmila is very good at fake skating and her pretend waterskiing in Evening in Paris was also excellent. I also applaud her efforts to look like she is gliding majestically under all that Spare Hair. The wig is bigger than she is! Prem is poor, Preeti is rich, they’re both good looking and there is no doubt about the results. Especially after he sells himself to science for an afternoon so Preeti can test hypothermia treatments on this most willing of guinea pigs. 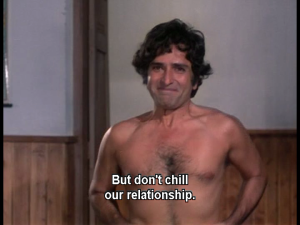 After a song related mishap, the two spend a night fighting off hypothermia.  What an amazing coincidence! Given that Shashi’s innate hotness seems to dry out his clothes in no time flat, the ‘cure’ did raise some questions. 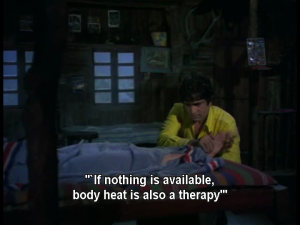 This episode has sparked much debate about whether Preeti was conscious, was it consensual, why didn’t someone keep their pants on … I say she looks rather pleased with herself the morning after and does not strike me as a woman with regrets. My diagnosis is that she woke up, saw what she saw and thought ‘Hello!’ 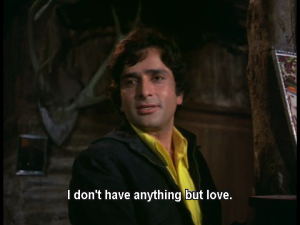 The youngsters want to marry but Preeti’s father Hirachand (Om Prakash) pulls a few swift moves to alienate the lovers. Preeti fell pregnant to Prem That Night and is sent to a sanatorium to have the child in secret. Hirachand and Prem’s ailing mother (Sulochana) play their parts in the drama and Preeti believes the child was stillborn. In a typically filmi twist, Shashi acquires his own son and loses his Ma. Everyone judges everyone else, and the misunderstandings send the protagonists off on their separate paths. 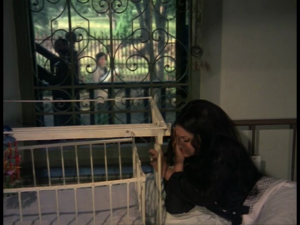 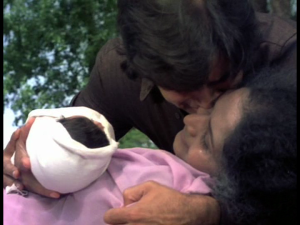 Apart from a spectacular display of acting – Shashi looks so joyous, and unperturbed yet loving, as that baby bawls its head off – this song is quite lovely and sets up the very caring single parent family.

Prem and son Rahul (Master Titoo, one of the few dreaded child artistes I like) have a really lovely relationship. Prem felt no need to marry a substitute for Preeti just so there was a woman to look after them both. He embraced his parenting role and did the best he could. I do think there could be a case for child cruelty when we consider the poor kid’s wardrobe, which features purple and ruffles as well as some hideous short and vest ensembles, but apart from that Prem was a thoughtful and loving dad.

Preeti crosses his path again, and has no idea that Rahul is her child, or that Prem had always loved her and never moved on. Prem thinks that Preeti jilted him to keep her luxe lifestyle and that she never cared about her child. 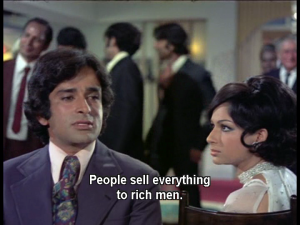 The ‘will she won’t she realise’ tension is heightened as her fiancé Amar (Shatrughan Sinha) takes over treatment of the crippled boy and so the families draw closer. Shotgun’s entrance is so amazingly filmi, I can’t believe I almost always forget he is in the film until that moment! And his treatment of what he decides is a psychological rather than physical condition is unconventional to say the least. The contrast between Prem and Amar’s economic circumstances couldn’t be more pointed. 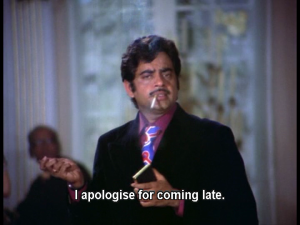 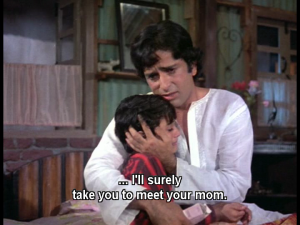 Despite the high level of coincidence and near revelation, the performances of Shashi and Sharmila along with Master Titoo made me care so much about what would become of them. Shashi shows his pain and anger, but also his love for both Preeti and his boy. Sharmila is poised and beautiful, and she shows the uncertainty and hope when she sees her old flame. I also really like that the story is about a man who becomes a single dad while the woman moves on with her life and has no idea she has a living child. 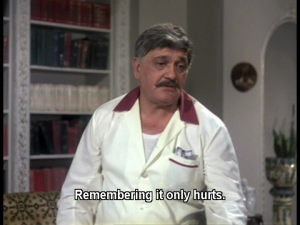 Preeti lives with her father, who of course knows about the child, but there are no great histrionics about her lost honour or anything. She has had a long engagement to Shotgun and her future seems assured. Om Prakash is shown as a lonely old man in his opulent home, and the development of his relationship with grandson Rahul is fun as they bring out each other’s competitive and playful traits.  The winning enthusiasm of the child and his belief that his mother will come back for him one day makes his grandfather realise the gravity of his deception. There’s a lot of quiet heartache in amongst the more dramatic antics.

As for the who’s who and what of the story…There’s a Significant Song, a secret photo, Ticky (Amar’s sister, played by Ruhi) loves Prem, Prem loves Preeti, Preeti loves Prem (again), Amar loves Preeti, Rahul just wants everyone to be happy. We have the flaming roller skates of death, and then the happy roller skates of ever after. Almost everyone ends up on wheels at some stage, even the token thugs who hang around menacing young ladies. 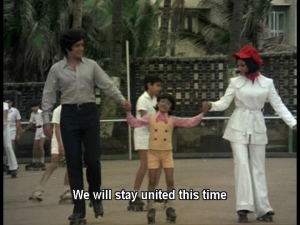 But the mad masala trappings never really get in the way of the story so I think Desai and Prayagraj must have had some robust conversations of their own to make sure they kept the balance right. The dialogue by K.B Pathak is marvellous, shadowed with meaning and laden with emotions. When Prem and Preeti meet again, and he sees her as the rich girl who has done well for herself, the polite bitterness is pitch perfect. There is great use of eavesdropping, particularly in a ‘musical chairs’ scene that throws the protagonists into proximity and under stress where much is explained in small bites of barbed civility.

And then, I’m left with that image of Shashi on roller skates playing the accordion.

See this as a great example of Manmohan Desai’s masala excellence, for the beauty and appeal of Sharmila and Shashi, for the marvellous songs by R.D Burman and for the passionate and romantic love story that produced a happy family but didn’t feature a wedding.  5 stars!