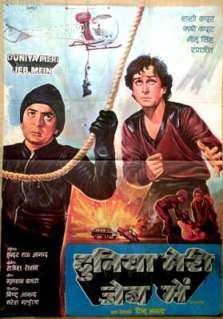 Duniya Meri Jeb Mein is kind of insane. But it sneaks up on you. It starts out all about family and brotherly love and then it drags in the circus, deception, murder, amputations and revenge. God knows what inspired Tinnu Anand who directed it. It’s also another Kapoor Khazana delight as it stars Shashi and Rishi Kapoor, plus Neetu Singh.

Beth wrote this film up some time ago, and I strongly recommend the LolBolly masterpiece she created.

Karan (Shashi) lives in a spectacular house run by Mrs Robins (Nadira), the mother of his dead friend Johnny. She looks after Karan as a means of keeping her son’s memory alive, and seems to be Shashi’s only friend. He is the sole financial support for his little brother, Vishal (Rishi), who is at a fancy college and believes that Shashi is a successful businessman (he pretends he owns the house Mrs Robins works in, and borrows fancy suits).

Karan is poor but honest only not really honest but he is dishonest for the right reasons so that’s OK isn’t it?

Vishal is a top student.  He turns down a scholarship as he believes his big brother will provide for him and so wants someone less fortunate to benefit. That’s a nice gesture, but it puts the pressure on Karan to deliver a scholarship to the USA.  Vishal falls in love with Neeta (Neetu) in the course of a chance meeting, and they spend a lot of time sneaking in and out of each other’s hostel rooms.

For most of the first half, Neeta and Vishal occupy the romantic comedy track with support from Paintal and assorted college personnel. It wasn’t my favourite element of the film, as I found Vishal bordering on the sleazy and entitled rather than boyishly charming. He never really considered the damage to Neeta’s reputation or that he may get her expelled. It was about what he wanted and the tricks he employed to get his hands on her. Neeta didn’t have to do much apart from chase Vishal around. Rishi got a spectacular spotty shirt which I did applaud. 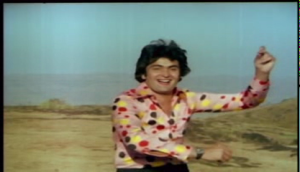 Karan scrambles to keep up the deception about his finances as Vishal and Neetu are engaged and her family come to meet him. In an alcohol fuelled meltdown, he tries to tell the truth but the guests, including the house owner Diwanchand (Agha), just think he has a knack for metaphors.

Yes it is all a bit complicated. Perhaps they’re all stunned by the architecture. It must have been like living inside an Easter egg with all the curved walls, and I can’t begin to describe the art collection.

Karan has been funding Vishal’s lifestyle by working in a circus. He and Rawat (Ranjeet) are trapeze artists so be warned, there will be leotards (although Shashi looks more like he dressed for cricket).

Ranjeet is hired to break into a wealthy criminals abode. His employer thinks of everything, right down to detailed building models and a training course, and it becomes clear Ranjeet needs more assistance.  Or possibly a bit less Ranjeet as he isn’t terribly nimble. 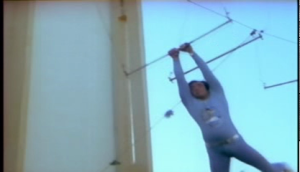 Karan believes that they are breaking into the apartment to rescue a little girl. Sigh. I suppose that can be put down to being a good person, but the matching pleather pants are never explained. My DVD is terrible quality so it’s almost impossible to screencap the trapeze sequence between the buildings but it is great, especially with the cheesy disco soundtrack (thanks Rajesh Roshan!).

Shashi is betrayed and his life ruined in one swoop.

Ranjeet is hired to finish Karan off so he cannot testify, and he does seem to take to the dark side with ease. There is lurking and suspense, enhanced by dramatic lighting and camera angles. But Ranjeet isn’t a very skilful assassin, and the bed-ridden man with no legs manages to fight him off. It’s clear by now that Karan is hard to kill.

Karan sets out for justice and vengeance, which are sort of interchangeable in this film. There is a token police presence, Inspector Yadav (Sudhir), who is also out to solve the crimes. He doesn’t really add a lot of menace or suspense, but there is a law and order message in amongst all the shenanigans.

Some men might give up when faced with double leg amputation and the destruction of their dreams, but Karan is made of sterner stuff. Vishal decides to feel very hard done by. Yes, clearly he is suffering the most. In fact, everything is always about Vishal and he is quite tiresome as he feels sorry for himself, and then weepily apologises. I was especially irritated by a scene when he berated Karan for secretly working in a circus which meant that of course he was also a thief and a murderer. Not Rishi’s finest character choice. Shashi and Rishi have great rapport, and their brotherly relationship played out really well in the less fraught scenes.

Diwanchand sort of adopts the boys. While Vishal and Mrs Robins believe he is tucked up in his very stylish bedroom, Karan is really honing his sneaky carpentry skills (but how did he get the materials?). The last 45 minutes is where it gets crazy. Karan takes to the streets on his wheely board, searching for Rawat. Helen does her thing! Karan demonstrates an impressive near-vertical take-off which I put down to his circus training. Or something. 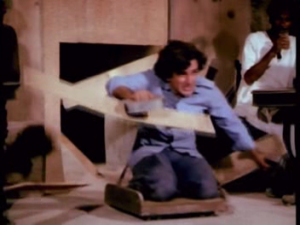 There are lingering doubts about some things. Things like why, when on the Conveyor Belt of Death, Shashi didn’t just roll backwards but you know, it doesn’t pay to overthink.

Neetu more or less disappears in the second half of the film. It’s all about the manly angst as the brothers fight about who will do the revenging, but then Neetu comes back as Ranjeet bait. There are more disguises and complicated scheming and…

The finale should be seen rather than described but naturally, evil cannot withstand a double Kapoor onslaught even if evil has a helicopter. Especially once the Kapoors stop arguing with each other.

I can’t help but enjoy this very silly film, and love that Shashi still gives a  committed performance. I also enjoy seeing Vishal cop a tight slap from Mrs Robins. I would have liked a better soundtrack, especially as Neetu was underutilised and more songs might have given her more to do. 3 stars!