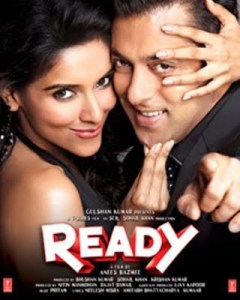 I thought I was, but I really wasn’t.

Ready for Ready that is.

Having seen the original Telugu version  and then the Tamil remake Uthama Puthiran  I felt that I really should watch the Hindi version to complete the set. So despite some strong reservations I went with a group of friends thinking that moral support would be needed. And I was right!

The original Telugu film was so successful because of the chemistry and personality of the two leads. Ram and Genelia were able to take a fairly ridiculous story and make it engaging because they were both so likeable in their roles. Similarly, there was chemistry between Dhanush and Genelia in the Tamil remake and the comedy was funny and appropriate. Sadly though, the Hindi version has none of these things. The leads aren’t likeable, there is no chemistry and the comedy is incredibly juvenile and inane.

The weakest part of the film in all versions is the story, which doesn’t hold up very well to being remade when the whole point is completely missed. Ready was originally a coming of age story about a young man becoming ‘ready’ to settle down and commit to the girl he has fallen in love with. This seems to have totally escaped Rajan Aggarwal and Ikram Akhtar when they re-wrote the screenplay.  While I applaud the idea of making Asin more independent and more in control of her life, the way in which this was attempted just made her appear conniving and manipulative. Not attractive at all.

Briefly, Prem Kapoor lives in a huge house with his many uncles and aunts.  He helps his next door neighbour’s daughter run away to marry the man she really loves, and as a result the family guru organises a bride for Prem in an attempt to make him more responsible. I really don’t see how that was supposed to work, but nevertheless that was the plan. Meanwhile Sanjana has run away from her forced wedding to her cousin. Her parents are dead and her two feuding uncles both want to gain control of her fortune by marrying her off to their respective sons. Sanjana escapes to the airport, but rather than getting on a plane and heading back to the USA, she decides to pretend to be the prospective bride Pooja that Prem has come to meet. She ingratiates herself into the household by putting Prem down at every turn. This was also probably supposed to be funny, but just wasn’t. There are many cameo appearances by a lot of stars who really should have known better, and a cast of thousands as the respective uncles, aunts, cousins of Prem and Sanjana.

The rest of the story more closely follows the original. The two warring sides of the family turn up and Sanjana ends up imprisoned. Prem tracks her down and in the course of rescuing Sanjana manages to civilise her warring relatives with the help of his own family. This also involves befuddling their accountant, Paresh Rawal as Balidaan ‘Baali’ Bhardwaj, who is the only actor prepared to actually commit to his character. This redemption of the families felt very rushed and there was no real attempt to explain the reasons behind the feud. There was much more time spent on toilet humour and throw away one-liners that just weren’t funny, rather than trying to make any sense out of the plot. I know that it doesn’t make much sense in any case, but it is so disjointed here that it’s hard to work out exactly why Prem’s family all show up. The only thing that did make me laugh was a subtitle referring to scrabbled eggs, and I don’t think that was intentional.

The various supporting actors propped up as much as they could of the story but really the film is a showcase for Salman, so everything revolves around his character. l do like Salman Khan and think he was fantastic in Dabangg and Partner, but he doesn’t seem to make any effort whatsoever here. He seems to play himself rather than the character of Prem and there are just too many self-referential ‘jokes’. Usually these manage to amuse but even the time-honoured tradition of Salman taking off his shirt seemed tired and lack-lustre here. There are some pretty locations though.

I strongly suspect that Salman choreographed his own routines since there was very little actual dancing, even in the item song above with Zarine Khan. Even worse was the remake of Devi Sri Prasad’s Ringa Ringa from Arya2. Thrusting, scratching, shaking, twitching and grimacing at the camera is not dancing! There is no comparison at all with the original – click on the link above after watching Dinka Chinka and you’ll see what I mean!

I‘ve seen Asin dance and act in Sivakasi and Pokkiri, so I know she’s capable of so much more than she was given to do in this film. The lack of chemistry between her and Salman is perhaps not too surprising given the age difference, but at times it makes for somewhat uncomfortable viewing. The only reason I can see here for Prem to fall in love with Sanjana is that she’s the only woman who isn’t instantly in love with him, or perhaps it’s because she is just as manipulative and self-centred as he is. It’s totally irrelevant to the plot in any case and not much time is spent on the romance in the second half. I’ve never been much of a fan of Anees Bazmee’s films and this certainly isn’t going to change my mind. There is no coherent development of the story and far too much reliance on pee and fart jokes rather than actual comedy.

If you do want to watch this film I would recommend Telugu version instead – a much better film with actual dancing and funnier comedy. This film just kept losing points for me as I was so disappointed with it in comparison with the original. I also know that Salman can be much better than this and it’s really frustrating to see him put in such a mediocre performance. I really didn’t like this Ready at all!