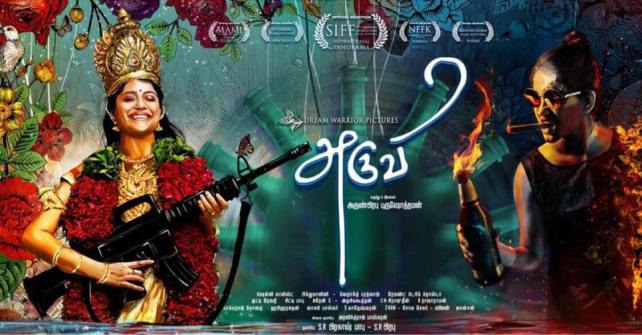 Arun Prabhu Purushothaman’s debut film is a difficult film to categorise. It’s a drama, a satire, even at times a comedy, but mainly it’s a delicious slap at reality TV, patriarchal society and that god of us all, money. Although by the end the film becomes overly mawkish and drags out the remaining scenes, Aditi Balan puts in a tremendous performance as Aruvi that powers through the final sentimentalism. Her top-notch performance, along with an absolutely incredible Anjali Varathan ensure that Aruvi is a memorable watch and another excellent addition to the new wave of Tamil cinema.

The film starts with a police interview. Aruvi (Aditi Balan) is a suspected terrorist and as Special Investigator Shakeel (Mohammad Ali Baig) tries to understand just who Aruvi is, Arun Prabhu fills in the background for the audience with short vignettes that dip into Aruvi’s life story. We see Arvui as a young child, growing up in the countryside with her adoring father, who stops smoking just because she tells him it smells bad. If only everyone else would listen to this simple truth! As she grows up Aruvi gets a brother, Karuna (Arnold Mathew) and the family moves into the city.

Aruvi misses the countryside and tells her father that she doesn’t like the move, but she soon adapts and fits easily into school life. She’s not a particularly nice person – she teases other students and in one memorable scene refuses to give a fellow student a sanitary pad – but she is a typical teenager making it hard to understand how she ended up being interviewed by the police as a suspected terrorist.

These background scenes are interspersed with the aftermath of whatever event has led to Aruvi’s arrest. Her father is called to be interviewed, her friend Emily (Anjali Varathan) is also arrested, and we see snippets of how they have interacted with Aruvi in brief flashes, just as if each question has stimulated the memory of the character. It’s beautifully done and keeps the audience guessing before slipping into a more traditional flashback starting with Aruvi in college. Aruvi is studying psychology along with her best friend Jessy (Shwetha Shekar) and the two seem totally normal until the day Aruvi throws up in class. Anyone who has ever watched an Indian movie before knows exactly what this means, and as the story then moves on to Aruvi arguing with her parents and brother before finally being thrown out of the house, that assumption seems logical. Except that Arun Prabhu keeps the reason for Aruvi’s estrangement from her family ambiguous until later events reveal exactly why her family has turned against her.

Aruvi takes shelter first with Jessy, but then moves in with Emily, a transgender who helps take care of Aruvi and helps her find a job. Emily then helps Aruvi get accepted on to a reality TV show, where guests tell their stories and are invited to confront the people they feel have ‘done them wrong’. Here, Aruvi gets to confront three men whom she accuses of raping her, and this is where everything starts to go wrong, leading to the terrorist accusations.

The TV show is a brilliant idea, and allows Arun Prabhu to satirise such shows, as well as the media in general – the headline chasing tactics, talking head opinions shows (of which India seems to have hundreds!), but also shows the police having to act responsibly due to the media presence. The hypocrisy is stunning. Presenter Shoba Parathsarathy (Lakshmi Gopalaswamy) acts like a diva despite working for a small TV company as a reality talk show host – she’s no Oprah! Shoba turns on the charm as soon as the camera is rolling and moves easily from discussing Aruvi’s trauma one moment to a tacky advertisement line for the sponsors before cutting to a break the next, something Aruvi parodies brilliantly later on. The hierarchy of the studio is lampooned, with the little people including the security guard, a runner for the show and the junior producer also getting their share of the ridicule as Aruvi turns the tables on the entire production. This section is brilliantly done and Arun Prabhu uses the talk show as a way for Aruvi to highlight the helplessness of women in Indian society. But Aruvi also comments on the evils of more than just rapacious men, describing the middle class as spending machines who further enrich the wealthy of the world, while themselves gorging on the poor and trampling them further into the ground.

What’s disappointing is that Aruvi forgives the three men, one of whom is unconscionably violent, and the full horror of their crimes is never brought to bear. Although Aruvi initially goes onto the TV show to demand an apology from these men, they are instead made out to be the victims of her ‘attack’, when in reality all three deserve to be arrested rather than Aruvi. But then that is part of the point. The patriarchy of Aruvi’s society does not allow her to be the victim here, and she has no right to complain about her life even though she has had no control over what has happened to her.

Aditi Balan is incredibly powerful in the lead role, first as a typical teen, then student and finally a young woman trying to cope when her whole world has fallen in around her. Her final dialogues, which could have come across as overly cloying and maudlin are instead transformed simply because of her poignant and heartfelt performance. Perfect casting and an excellent performance are what make Aruvi such a compelling story.

While all the cast are excellent, Anjali Varathan shines as Emily and it’s a lovely change in Tamil cinema to have a transgender as a sympathetic character. She’s easily the most compassionate and decent person in the entire film with some of the best lines too. Anjali makes her character come alive in after only a few short scenes, making Emily the most memorable character after Aruvi. I love her introduction as she good-naturedly searches for a possible underwear thief in their building, and her care of Aruvi is beautifully shown. In a film that’s all about those on the margins of society, Emily is an outstanding standard bearer to prove that people are just people. No more, no less.

There are many small throwaway moments that also help lift the film above the ordinary. Jessy’s reaction to Aruvi when she goes to see her after the arrest is perfect middle-class guilt. The interactions between the crew members in the TV studio are well captured as are the reactions of the various homeowners and a funeral party as the police prepare to storm the TV studio. The décor too rings true, while Aruvi and Emily’s wardrobe choices are perfect for the characters they play. No glamour and OTT make-up here, except for Lakshini Gopalaswamy as she hits the nail on the head with her portrayal of TV persona Shoba.

There is a secondary theme that deals with another issue that society in India seems to brush under the carpet, but I don’t want to reveal too much since Aruvi does a much better job of explaining. Suffice to say that Arun Prabhu wants to draw our attention to how poorly society treats those who are perceived to be different, although he does rather draw out the final scenes as a result.

The music from Bindhu Malini and Vedanth Bharadwaj is beautiful and suits the film perfectly. The songs develop naturally from the events and are incorporated well into the narrative. Shelley Calist’s cinematography makes the countryside stunning particularly whenever Aruvi visits one of her namesake waterfalls. The comparison between the clear water and Aruvi’s own problems might be a trifle clichéd but it’s effective, as is Aruvi’s gradual isolation in ever smaller rooms as a symbol of her shrinking horizons. Aruvi is not a perfect film, but it is different. It’s rare to get a female-centred film that doesn’t include a major romance or have male characters eventually take centre stage. This is a film that talks about the difficulties women face day to day but not as a rampaging feminist agenda, but rather simply shows how time and time again women are made to feel at fault even when this is blatantly untrue. One to watch for the excellent performances, novel approach to a story and a real heroine for our times. 4 stars.