Karvva released earlier this year in India, and we finally got a chance to see the film here in Melbourne last weekend. I’m not usually a fan of horror films but the blurb about Karvva suggested that it was a combination thriller/ghost story, so I ventured out to the cinema in the hope that it may be another RangiTaranga. However Karvva turned out to be a fairly formulaic and not particularly frightening (or even thrilling) film, but despite the inevitability of the storyline there are a few good features that make it worth a one-time watch.

The film is a mix of two separate but related stories, one based on a documentary film crew out to debunk a rumour about a haunted house and the other recounting the kidnap of a rich businessman’s daughter. The connection between the two is the house; is a classic ‘renovator’s delight/fixer-upper’ mansion located somewhere in the Karnataka countryside.

When an NRI attempts to sell his ancestral property he finds that it has a nasty reputation as a haunted house, and in an attempt to improve his chances of a sale he enlists the help of a documentary filmmaker specialising in investigations of supernatural events. The TV crew has some kind of spiritual advisor and a boffin with a machine that measures ghost activity so obviously they’re the right people for the job. However despite all their gadgets and scepticism, the TV crew find more than they bargained for in the abandoned house which lives up to its reputation. Naturally they have to wait for an auspicious time to go back and try to exorcise the spirit which leaves the scene set for the next reckless visitors to the mansion. 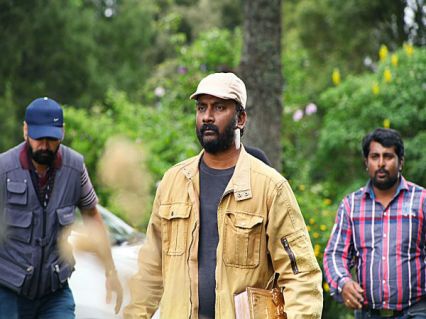 The second part of the story focuses on Thilak, a spoilt, rich kid who lives the high life but who is brought down to earth when he loses a lot of money at a casino. He tries to get some money out of his father (Devaraj) by pretending he needs cash for a business deal, but his father decides that enough is enough and refuses to bail Thilak out. Anisha Ambrose is Thilak’s sister, who tries to persuade her dad to cough up some money for her brother, but before she can achieve very much she is kidnapped and a ransom note sent to Devaraj. The kidnappers choose Thilak to deliver the ransom money and the directions he follows take him to an abandoned mansion somewhere in the Karnataka countryside. Yes – this is the same Raja bungalow that we’ve already seen is haunted by a vengeful ghost, but Thilak is only concerned about finding his sister and isn’t too concerned by his surroundings. He also approaches the house from the back which looks much less creepy and isn’t quite as festooned with cobwebs as the front of the house either.

Events conspire to leave Thilak, his sister and three friends stuck in the house overnight. As the ectoplasm starts to swirl and the friends find out the history behind Raja bungalow it’s clear that they’re not going to have a peaceful night and indeed may not even last until morning.

The basic plot is a fairly standard ghost story but there are a few twists, particularly in the second half which make the film more interesting. Unfortunately, although the visual effects are good, each even remotely spooky moment is accompanied by loud screechy music and distorted screams that quickly remove any suspense from the scene. There are numerous points where one of the characters is shown from behind with the suggestion that someone (i.e. the ghost) is creeping up behind them. It would have been so much more effective to cut out all the noise altogether, or even go for some slightly more clichéd breathing rather than the loud cacophony that occurs every time someone turns their back on the camera. More effective are the shots where a vague figure appears when the lights go out, and where there are half seen flickers in the periphery, but as the film goes on the effects get more and more obvious and subsequently less and less frightening. The inclusion of a comedy track of sorts with Vijay Chendur reduces any suspense that might have built up with the initial ghostly effects while the loud soundtrack and OTT make-up towards the end mean that the final scenes are funnier than I think they were meant to be.

The actors are occasionally overshadowed by the effects, but Thilak is fine as the sceptical and stalwart hero of the hour. Mostly he just has to ignore all the odd happenings and boldly go forward to investigate the latest black-out, noise or other unusual occurrence, but he does so with a reasonable amount of attitude and is good at the end when everything is explained. However RJ Rohith as one of Thilak’s friends is rather wooden and inexpressive although some of this may be due to his rather dour character, which doesn’t give him scope to do much else. Anisha Ambrose and Anu Poovamma are both good and escape the usual fate of female characters in a horror movie by being braver than seems plausible, while Vijay Chendur is funnier than expected and makes an impact despite only having a short time on-screen.

Navaneeth wrote and directed the film and there are some good ideas in there, even if the ghost story and horror element is somewhat formulaic. The NRI desperate to sell his house works well and there are some satisfyingly scary moments with the TV crew as they search for clues. The initial kidnap scenes are also well thought out and the events when the friends first find themselves stuck in the house are effectively written. However as the horror part of the story kicks in the film starts to lose its novelty and the final explanation can even be partly anticipated given the events of the night in Raja bungalow. Still, the cinematography by Mohan is excellent, there are a few good spooky scenes and I like that the female characters are braver than some of the men! Worth watching for the set-up in the first half, the twists in the second and a good performance from Thilak Shekar.