Parugu is Bhaskar’s 2008 follow-up to his hit film Bommarillu and despite a rather hit and miss screenplay the movie ended up being a hit, was remade in various other languages and scored a number of awards. While the story might be nothing new and labours under every single film cliché imaginable (love at first sight, stalking = love etc), both Prakash Raj and Allu Arjun are excellent and work well together to make Parugu more watchable than the synopsis suggests. Plus the film starts with Bunny on roller skates – how can you not appreciate that!

I particularly love this song since when I can tear my eyes away from Bunny dancing, I recognise many of the locations. Plus, as always Bunny’s energy and enthusiasm is incredibly infectious, making for a great start to the film. 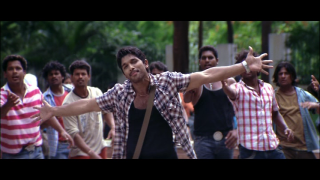 Sadly, the film doesn’t manage to keep the energy for long as the story moves to a village where local big-wig Neelakanta (Prakash Raj) is presiding over the marriage of his daughter Subbalakshmi (Poonam Bajwa). However, not all goes to plan as Subbalakshmi elopes with local villager Erra Babu which sets her father and his army of goons off on a rampage to find her. As part of their investigations, they pick up all of Erra Babu’s friends from the village and soon widen their search to include Sharma (Saptagiri) from Kakinada, Seenu (Chitram Srinu) in Nellore and Krishna (Allu Arjun) in Hyderabad.

Neelakanta and his brother Chinnabbayi (Subbaraju) keep the men in a shed while they continue the search for Subbalakshmi and Erra Babu, although this seems likely to backfire when Krishna engineers an escape. However, just before making it to the train and freedom, Krishna is brought up short by a girl he sees in the morning mist. He falls instantly in love and resolves not to leave the area until he discovers her identity. Naturally, the girl Krishna has fallen for is the youngest daughter of Neelakanta and she’s already having a number of issues due to the fall-out from her sister’s elopement. Through a window in the shed she pleads with Krishna and the rest of the detainees to reveal her sister’s whereabouts but instead she gets caught in a blackmail trap and agrees to help Krishna find the girl of his dreams. While the audience know that Meena (Sheela Kaur) is the girl he has fallen in love with, neither Krishna nor Meena realise until well into the film that she is the one Krishna is trying to find.

There is some comedy in the first half as Krishna hatches up various schemes to search for the girl in the woods, while Sunil and Srinavasa Reddy add some slapstick to further lighten the mood. Prakash Raj does his usual ranting as an enraged father but Bhaskar aims to show him as a more sympathetic figure and changes tack with the character in the second half.

As Krishna discovers that the girl he loves is Neelakanta’s daughter, Neelakanta finds out that it is Krishna who has helped Subbalakshmi vanish and he tortures him to find out where his daughter is hiding. This results in everyone – Neelakanta, Chinabbayi, all the various thugs, Krishna and Erra Babu’s other friends and Meena, haring off to Hyderabad on the trail of the missing couple. Krishna takes advantage of every opportunity to speak to Meera and starts to manipulate her feelings for her father to his advantage.

Meena doesn’t instantly fall for Krishna, but rather tries to keep her distance and is generally upset and confused by his attentions. Sheela plays Meena as nervous and afraid, although also somewhat gullible and impressionable. Bhaskar has given Meena and her father the same nervous mannerisms which does help link the two as a family, but Neelakanta’s decision to bring Meena with him still stands out as odd. There is some attempt to have meaningful conversations between the two, but these don’t work as well as they could, and the relationship between Meena and her father seems cold and impersonal as a result. 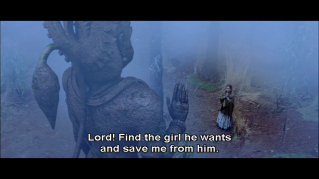 Meena genuinely seems scared and anxious for most of the film – afraid of her father and his goons, afraid of the men in the shed, particularly Krishna and afraid of falling in love. There is a rather bizarre song where Krishna is dressed as a mad priest and chases Meena though the canyons of Petra before she wakes up to realise it’s a dream. Bhaskar isn’t as clear here as he could have been that stalking is not the best way to a girl’s heart and for all his cheer and mostly sunny personality at times Krishna’s behaviour is quite predatory, making Meena’s fear seem quite rational. There really isn’t any good reason for Krishna to continue his pursuit of such a reluctant object of his affections, and very little basis for Meena to change her opinion. So Meena’s gradual acceptance of Krishna doesn’t seem realistic and even when she does start to warm to him, the romance generally has little sparkage. It’s left to Arjun and Prakash Raj to provide the chemistry that keeps the film going, and they both do that magnificently! 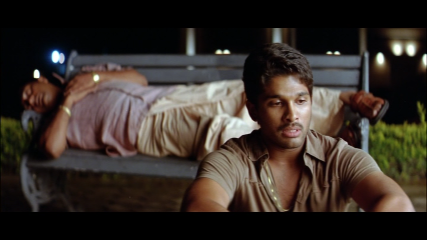 As Neelakanta gets more and more desperate, Krishna starts to realise that it’s his love for Subbalakshmi and his concern for her welfare that is driving her father to such desperate lengths. Although the change from concern about reputation and prestige to concern about his daughter is uneven and not always convincing, the change in Neelakanta does make the point that families suffer in a myriad of ways after a runaway marriage and provides the families point of view rather than the usual romantic picture of an elopement. Strangely, neither Krishna nor Meena use this opportunity to approach Neelakanta about their own love affair, which draws out the already overly long screenplay even further without adding any more substance to the plot. However it’s the interactions between Krishna and Neelakanta that make the film interesting, and both actors work well together to make their conversations and gradual acceptance of each other the best part of the film. 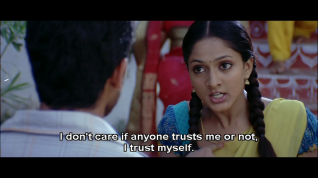 This is a Bunny movie and so there are plenty of opportunities for him to shake a leg and demonstrate his dancing skills. This is one of the best although the location and costumes could have been better.

Prakash Raj is in his element here. He has plenty of material to work with – all the rage and fury when his daughter runs away, slow burning anger at the men who are hiding her whereabouts and plenty of angst and remorse as he starts to fear that he as lost her forever. However, Bunny matches him step for step and together the two bring credibility to their roles that the romance and hunt for Subbalakshmi fail to deliver. It may be predictable with a total lack of empathy for any of the female roles (for which I’ve deducted a star), but Parugu does have strong performances from Bunny and Prakash Raj and the idea that elopement isn’t the solution to every problem is at least a little different from the norm. Parugu is worth watching for Bunny (of course!), Prakash Raj and the excellent dance sequences, but best to consider as an action/drama rather than as a romance to avoid disappointment. 3 ½ stars.