The film starts with Raju (Pari) hiding from ticket inspectors on a train as he makes his way to Bangalore without a ticket. Arriving at the railway station, he’s immediately singled out by various people who prey on the new arrivals. First is ‘the Mongoose’ who works for an NGO that tries to reunite the children with their parents. However Raju suspects her motives and when she goes to buy him food is then picked up by Solution (Yash Shetty) who runs a gang of children based at the station. The children sleep in concrete pipes and spend their days collecting discarded water bottles which are then refilled and sold by more of Solution’s gang. The older and more trusted children such as Pappu (Syed Pervez) sell water, while Jollu (Manohara) is instructed to show Raju where to find water bottles and anything else that Solution can use. 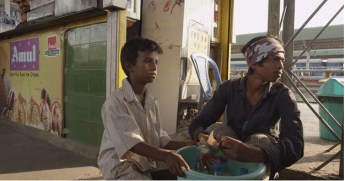 Like most of the children, Jollu is addicted to glue-sniffing and he forces Raju to inhale the fumes too. The kids call the glue ‘solution’ and (presumably this is where Solution got his nickname), they buy it at the end of the day after Solution has paid them their wages for their work. Initially Solution seems to be a petty criminal who looks after the children by feeding them and giving them shelter, but selling them glue is just one of the ways he keeps the children under control. Solution is also a paedophile, and he drags the children off individually to abuse them whenever he feels they need disciplining. He also threatens to sell them to the beedi makers, where they will be kept in a factory all day and die from the chemicals, a threat that along with refusing to give them ‘solution’ keeps everyone in line. 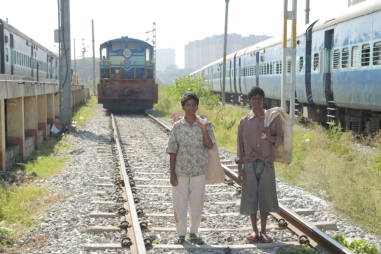 Raju is smarter than the average kid though, and he has managed to run away with some money which he hides as soon as possible. He also regularly calls home to his girlfriend Usha, asking her to run away to Bangalore as he feels the freedom there is worth the rough living. Despite the harshness of the life, it seems to be better than Raju’s experiences at home and he starts to make the most of what he has. Although Jollu initially shows Raju the ropes, Raju quickly realises that they won’t make any money by selling bottles to Solution, and with the aid of Karthik (Karthik) and Jollu he sets up a scheme to sell water himself. However, his success is short-lived when Pappu finds out what he is doing, and Raju and Jollu eventually end up in the care of the Mongoose (Divya) in the NGO shelter. 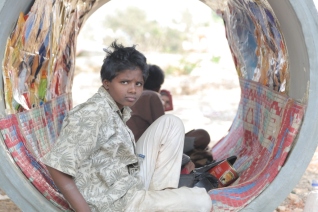 According to the website, most of the characters are played by non-actors and Pari is actually a rescue child being looked after by an NGO. Given this background, Pari’s performance is outstanding, particularly in the way emotions such as helplessness and hope are portrayed. Manohara too is excellent as Jollu, and his scenes where he enacts the violence and despair of an addict being deprived of his fix are very well done. Yash Shetty is also good in an interesting role that explores the contradictions of the railway gangs. There is the predatory nature of using the children to make money, but Solution is telling the truth when he explains to Raju that the NGO will simply give him back to his parents, and his descriptions of the government homes seem chillingly true. Solution does provide the kids with an alternative and although much of what he does is self-serving, he does give them food, water and shelter and protect them from the other predators around the station. There is another thread to the story which adds an unusual twist at the end. I don’t want to reveal too much, but one of the highlights of the film for me was Divya’s reaction when she learns the truth about Raju – this was unexpected as I really thought she would be intolerant of the situation given her usually dour demeanour, but her compassion and understanding did bring a tear to my eye!

Life for these children is difficult and dangerous. As well as the predators like Solution, there is violence from other gangs, drug addiction, the ever-present danger of the trains and the risk of being caught by the police or social workers. The stories they tell of their home lives explain why many prefer to live rough rather than return home, and there is some happiness in the shared camaraderie of the gang. The documentary style of the film keeps it simple and works well to distance the film from the emotional impact of many of the scenes, although they still make a considerable and lasting impression. Railway Children is a fascinating look at an underside of Indian society and despite the bleakness of the children’s lives it does end with hope that there can be a different outcome.