Easily the best thing about Aditya Chopra’s Befikre is Paris, and thankfully the characters spend plenty of time wandering past significant landmarks and meandering through lane ways full of beautiful buildings giving the city ample opportunity to shine. It’s not that the rest of the film is that bad – it’s just not that good. At its best, Befikre is funny and both Ranveer and Vaani are full of life and energy, but the plot is nonsensical, the dares that are used to further the love story ridiculous and there are so many WTF moments that the farcical ending is no surprise. And to cap it all off, it’s such a shame that a film set in the ‘city of love’ contains so little actual romance.

The opening sequence shows numerous couples kissing over the credits but what starts as possibly sweet and romantic moves to voyeuristic and just a little bit creepy as it goes on for that little too long. Any thought of love is also quickly dashed when we first meet Dharam (Ranveer Singh) and Shyra (Vaani Kapoor) as they’re in the process of breaking up. Neither one appears as an attractive character during the ensuing slanging match, while Dharam in particular seems to be typical of the chauvinistic man-child so often portrayed in Hindi cinema. Despite all the drama, the break-up is actually quite funny, at least until Dharam does the unforgivable and calls Shyra a slut (more of that later) before she finally leaves. 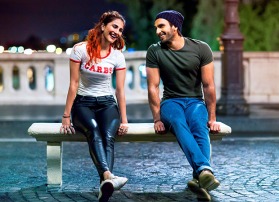 The film quickly moves back a year to when Dharam and Shyra first meet and their ’love’ story starts.  Dharam is a stand-up comedian who has moved to Paris to appear at a club run by his friend Mehra (Aru Krishansh Verma). Sadly Dharam isn’t funny at all as a comedian but he is quite amusing when he’s hanging out with Shyra. Initially Shyra doesn’t want a bar of him and is quite happy with a one-night stand, but a silly game of dare results in the two heading out together on a date and the relationship develops from there.  Both Shyra and Dharam resolve never to say “I love you’ and to keep things light and carefree with no commitment, but despite this agreement, Shyra ends up moving in with Dharam. The relationship moves forward through a series of ever more ridiculous dares, all of which would have resulted in arrest and possible jail time if, for example, anyone really did hit a policeman or perform a striptease in a library. Of course Dharam and Shyra are never seen to have to deal with any repercussions from their actions, some of which are a little too risqué to be easy viewing and despite all their antics there is never any sense that the two are anything other than friends-with-benefits. It’s Paris for goodness sake – where’s the wining and dining, the romantic walks through parks and along the Seine? Sadly for Dharam and Shyra it’s all night clubs and bedrooms with little else between – no wonder their relationship eventually breaks down so spectacularly.

The film moves back to the present day where Dharam and Shyra meet up again by chance and renew their friendship. And this time they are strictly friends as Dharam is happily working his way through a number of French women and Shyra is content with her single life. But then she meets Anay (Armaan Ralhan) and everything changes. Shyra embarks on a mature and adult relationship which seems to be happily heading towards commitment, but even here there are cracks in the screenplay. Who leaves their possible fiancé at the top of the Eiffel tower and runs off to ask their friend for advice? Would anyone seriously still be waiting for an answer after that? And while the easy camaraderie and friendship between Dharam and Shyra suits them much better than any romance, how can two people who parted on such bad terms ever develop the easy relationship shown here? At least Dharma apologises for his slut comment, accepting that it was inexcusable and less about Shyra and her previous lovers and more about him and his immaturity. Finally a small step (OK, maybe less of a step and more of a toe-dip) in the right direction, and rightly applauded by the audience too.

What keeps the film going are the performances from Ranveer Singh and Vaani Kapoor. No matter that there is zero sparkage between the two of them, they are both so energetic that it’s just possible to overlook the idiotic dares and juvenile behaviour and enjoy the craziness of two OTT people rampaging their way through Paris. This works better when they are friends rather than lovers, but for the most part their scenes together are funny and full of joie de vivre once they move past the bedroom antics. I love Ranveer Singh when he hams it up and exaggerates every possible expression and gesture as he does here. Similar to his roles in Kill Dil and Gunday, here he’s loud, brash and looks to be totally enjoying every minute as his enthusiasm colours every frame. He has great comic timing throughout and his one-liners had the entire cinema in stitches, while once again he sparkles through the songs.

Not to be outdone, Vaani Kapoor is equally buoyant during the flashback sequences while the evolution of her character allows her to be more reserved and restrained in the second half of the film. Vaani expresses a range of emotions well and her wavering and indecision about commitment is very well done in the latter half of the film. She also fits well into the European-Indian styling she is given and at least in the second half of the film does deliver some French-style sophistication during her romance with Anay.

Despite the ridiculous storyline I did enjoy most of Befikre – although nothing could make me enjoy the ending, not even Ranveer. It was a real pleasure to see Paris as the backdrop for the film even if more could have been made of its reputation as a city for lovers. While both Dharam and Shyra are irritating during the flashback sequences, for the most part their friendship is more accessible and I did find a lot of the humour very funny. Most of the audience were laughing too and the general atmosphere was pretty upbeat in the cinema. The songs from Vishal-Shekhar are great and suit the overall mood of the film and of course the whole film looks stylish, but Befikre really needed a much better story-line and more depth to the characters. The end result is a romantic comedy that basically has no romance despite the best efforts of Ranveer and Vaani. Worth watching for the beautiful views of Paris and the exuberant Ranveer Singh who really can make anything engaging!