Ueda Shinichiro’s One Cut of the Dead was a highlight of the recent Japanese Film Festival in Melbourne, and possibly my favourite film of the year. It’s a budget horror flick, a movie about movie-making, and a sweet story about the shared love of things that can bring people together.

Opening with Director Higurashi making a low budget zombie movie in a spooky abandoned facility, the film quickly takes a turn as the cast find themselves under attack by “real” zombies. He sees this as an opportunity to get genuine emotion and real horror from his cast so he will not stop shooting and actually pushes the actors into more peril. Bloody, profanity laden, decidedly B movie, unintentionally funny, the story speeds to its conclusion. All in one epic 37 minute take. But then the clock winds back and we get to see how Higurashi and his crew came to be in this place, all the planning and preparation for their movie, and what motivated them to do it. And finally, Ueda takes us back to the day of filming, but this time we see the things happening on and off camera and what that means for Higurashi and co. 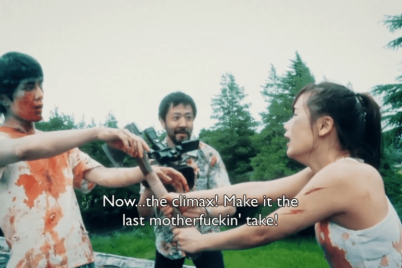 The director Higurashi is completely over the top, threatening his performers and demanding they keep filming even when their life may be at risk. He has one shot at making the film and will do what it takes to deliver. I really enjoyed Takayuki Hamatsu’s performance as he would swing from politely earnest to literally spitting with rage and back, all in the service of his film. His relationship with his sulky teenaged daughter Mao (played by Mao) and retired actress wife Nao (Shuhama Harumi), who are both on the set, gives the film an unexpected sweetness amidst all the gore and dismemberments.

Akiyama Yuzuki and Nagaya Kazuaki play Chintatsu and Ko, the stars of the film. I enjoyed their deliberately bad acting in the movie within the movie, and the contrast with their vacuous celebrity sides. When things started to go awry they were the least prepared and therefore, among the funniest. Shuhama Harumi’s Nao is a walking cliché in some respects, intoning warnings and urban legends straight out of every other horror movie. Her hobby and practical application of her skills almost brought the house down, and her character really comes to life in the latter part of the film. The rest of the cast includes stock types like the has-been actor who drinks to steady his nerves, the goofy AD who never challenges an order, the finicky cameraman, and his enthusiastic assistant who just wants a chance to try her style.

Things move at a frenetic pace but there are beats where you can simply enjoy what’s going on before plunging back into the thick of it. I was constantly delighted by small details like the appearance of a hankie wiping blood spatter off a lens as the cameraman gamely ran in pursuit of a screaming actor and zombie.

The narrative structure is brilliant and the editing is timed to perfection. Things that looked like bad acting or glitches in the movie might later be seen in a different light and instead make you want to cheer for this game little bunch of movie crazy people. The jokes were sometimes funnier from the second perspective too, which is quite an achievement. Dolly Parton once said it takes a lot of money to look this cheap. Ueda Shinichiro has managed to make a highly technical and polished film look like it was made on a shoestring, but in a good way. It’s a tribute to the spirit of making do.

I flinched, I groaned, I cheered, I laughed so hard I cried. If you can stand a lot of swearing and fake blood splashing around, see this.

3 thoughts on “One Cut of the Dead”