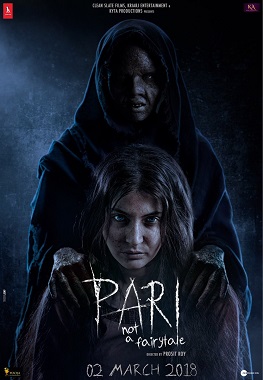 Arnab (Parambrata Chatterjee) and his parents are returning from meeting a prospective bride. Distracted and in heavy rain, nobody sees the old lady on the road until it is too late. They discover a girl chained up in the old lady’s house. Rukhsana (Anushka Sharma) is her granddaughter but there is no explanation for why she is chained up. She is certainly odd but seems able to live independently to some extent. A tattoo on the corpse freaks out one of the morgue attendants who was checking her for valuables. He calls Professor Qasim Ali (Rajat Kapoor), a man obsessed with eradicating all traces of a cult dedicated to spreading an ifrit’s bloodline. He has been looking for Rukhsana, the last of the ifrit’s children, for years. Meanwhile Arnab has taken pity on Rukhsana and has grudgingly allowed her to stay in his home. They fall into a cosy domesticity but there are signs that something bad is coming. Who is she? What is she?

Pari was suspenseful in that I wanted to see what happened, especially to Rukhsana. And there are some good jump scares. But Prosit Roy positions too many things as a fact within this film world rather than building the suspense of “is it real or ?”. Rukhsana shows some signs of mental illness, but Roy makes it clear something supernatural is at work. Having said that I liked a lot about the film, particularly Anushka’s performance.

Rukhsana isn’t a child but some childish things like cartoons take her fancy. Arnab brings home little gifts like clothes and art supplies and teaches her how fridges work, how to dunk a biscuit, and things like that. She’s not interested in learning to cook but she is obsessive about clipping her very fast growing toenails. Anushka does great expressions as Rukhsana starts to open up to the possibility of enjoying her life. Rukhsana realises she can eat fresh white rice and food that is abundant and just for her. She enjoys her new clothes and makes paper jewellery, delighting in how it feels to do something pretty and frivolous. She bonds emotionally with Arnab, and after seeing a cheesy romantic scene on TV one day her feelings for him suddenly go beyond friendship.

Anushka has to switch sharply between the mild, girlish, Rukku and her more damaged and aggressive side. Rukhsana has excruciating stomach cramps, and hides away from Arnab – he assumes it is her period and leaves her alone. But she climbs the wall outsider her room and walks down the street, still in pain. She sees a little dog she had befriended. And kills it suddenly and silently after kissing it affectionately. Face smeared with blood and tears, she is clearly distressed but the pain is gone. She is jealous of Piyali and loses control in front of Arnab. How long can she hold on?

Parambrata Chatterjee is a good fit for the emotionally repressed Arnab. He doesn’t say a lot but is still quite expressive. He doesn’t know what to do about Rukhsana but he feels responsible for the accident. Once they grow closer, he finds excuses not to send her away, and hides the truth from Piyali. He is ambivalent about that engagement but Arnab is the type to try and keep the peace. Rukhsana becomes possessive of Arnab and wants him to break off his engagement with Piyali. But he betrays both women and goes into hiding. Arnab is a bit of a weasel, at best he lacks conviction. But he is the least malignant man in the film so there is that.

Rajat Kapoor is unsettling as the fanatical professor. He genuinely believes he is doing the right thing, and he may be right about Rukhsana, but he is a sadist. He lingers over her demise and wants her to suffer. It’s not a complex character, but the performance is fairly restrained, and creepy.

Ritabhari Chakraborty does what she can with her character. Piyali is generally ignored or forgotten by Arnab but some of their conversations have an impact and she prompts him to think about things from a different perspective. She is open in discussing, and the emotional burden of past relationships. They are chalk and cheese. Piyali doesn’t exist just to make Arnab a better man, although she does seem to have that effect, and she would be perfectly fine without him.

The film is beautifully atmospheric, and lighting and sound are used well. I liked the small world of Arnab’s apartment and the contrast with noisy, bustling, Kolkata.

While not completely successful as a horror movie, Pari also works as a kind of parable. For me Rukhsana also spoke to how women generally have to pay the price for male pleasure. She is the result of a rape, and a man insists she must die because she is an abomination. She never chose to be born but she has a life. Without Arnab’s protection, despite her inherent power, she has no voice in society. He castigates her as if it was all her fault they had sex. The professor and his band of weirdoes don’t just want her to die a clean death, they want her to suffer to pay for existing. There’s also a glimpse of just how quickly people can start to see someone as different and justify inhumane behaviour to them. While the climax of the film is violent and messy, that’s more or less what I expect from this genre. I’d be more perplexed if the evil creatures or the doomsday cult decided they’d had enough and quietly moved on without telling anyone. In the end though, it is a very human gesture that dissipates the threat.

See this for Anushka’s performance in a competent and not so clichéd genre film. Not the scariest thing I’ve ever seen but probably not one for just before bedtime either. 3 ½ stars!