c/o Kancharapalem is a wonderful début film from Venkatesh Maha that looks at romance through four very different relationships. The first is a schoolyard crush that has unexpected consequences, the second is a twenty-something affair while the third is between a mystery woman and a bottle shop employee. But it’s the fourth story that has the most impact – a gorgeously developed romance between the 49-year old Raju (Subbu Rao) and 42-year old Radha (Radha Bessey). Along the way Maha touches on prejudices associated with caste and religion, adds in excellent characters like a stammering idol maker and a gym-running rowdy with political aspirations. This is life in a microcosm and Maha has produced a film that is down-to-earth and warm-hearted while still making some very valid points about society in India to-day.

The four different stories run alongside each other and intertwine, with the common theme being the area of Kancharapalem in Vizag. The area is separated from the next suburb by a train line, and the passing trains help to isolate Kancharapalem and provide a visible boundary for the residents. We become familiar with the streets too as each of the characters walks around the area and this creates an intimacy with the town –the small shop by the school is recognisable, for example, because a number of the characters at some stage walk past. Having created this small-town atmosphere, Maha continues by using locals as the support cast, ensuring that it seems more as if we are watching a documentary about the area rather than a fictional story that just happened to be set in

.The romances cover every generation and the youngest couple are still at school. Sundaram (Kesava K) deliberately puts himself in situations where Sunitha (Nithya Sree) will see him, but despite sitting next to him in class she barely seems to notice him at all. This all changes when he wears a pink shirt, deliberately as Sunitha has described pink as her favourite colour. While the rest of his class tease him for wearing a girl’s colour, Sunita finally makes a connection and the two become firm friends. Rounding out this part of the story is Sundaram’s father (Kishore) who makes idols for a living but is frustrated by his current employer so with the support of his wife, he decides to set up his own business. Sundaram’s father has a speech impediment and one of the real charms of the film is how it demonstrates the day to day frustrations he experiences. People finish his sentences and cut his stammering words off because they don’t have time to listen. It’s very effective, particularly since his wife is the only person who seems to really listen, but even she speaks for him during negotiations to make a new idol for the area.

The second couple are a little older – Bhargavi (Praneetha Patnaik) is at college and she first sees Joseph (Karthik Rathnam) acting as an enforcer for a gym owner (and ex-rowdy) with links to political organisations (Uma Maheswara Rao). After initial conflicts between the two, they settle into a relationship despite Bhargavi being a Brahmin and Joseph a Christian. While in the first story Lord Ganesha was an integral part of the story, here it’s religious intolerance from Bhargavi’s father that weaves through the narrative and threatens to destroy their relationship. The peripheral characters are excellent here, from Bhargavi’s college friend experiencing harassment from the principal’s son, to Joseph’s friends who urge him to accept meeting the girls no matter what, each is richly sketched in just a few brief dialogues that add further realism to the story.

The third romance is simply brilliantly written and producer Praveena Paruchuri is superb in the role of Saleema. Gaddam (Mohan Bhagat) sees a mystery woman every day as she stops to buy a bottle of Mansion House, and he falls in love with her eyes without ever seeing her face or knowing anything about her. When he does finally pluck up the courage to speak to her, he is shocked by what he finds. Saleema is a prostitute and he has even spoken to her one night when she was employed by his friends. Rather than being judgemental or allowing Gaddam to ‘rescue’ Saleema, instead Maha develops the story in a way that allows Gaddam to accept Saleema’s past while planning for their future together. This is such a mature and insightful piece of cinema and both actors bring the story to life perfectly. Saleema is positive and practical while Gaddam is amazingly supportive, even bringing Saleema condoms to ensure she won’t suffer the same fate as her mother, who died of AIDS. Here the religious attitude is one of indifference from Gaddam while Saleema’s Muslim faith becomes an issue for her neighbours, although never for Gaddam.

The final romance is also the best as Maha brings in caste and age biases while developing a relationship that is comfortable rather than passionate, but no less compelling than the others. Raju works in a government office where Radha is a new officer, newly moved from Orissa. Radha has no time for the class system that forces Raju to eat apart from the officers, and he gradually responds to her warm friendliness. Raju has never been married (it just didn’t happen according to Raju) and has a number of quirks that speak to his long-held bachelor status. He ‘jogs’ every morning, and performs yoga exercises at a shrine, while at night he drinks with his friends. The rest of Kandharapalem just wants to see him married, and suspect that he is gay, but Raju is happy as he is, and more than happy to simply be friends with Radha. She has other ideas and the romance between the two develops slowly but realistically, with the emphasis being on companionship and friendship. The couple face opposition from Radha’s brother who declares she is too old for such nonsense – she’s 42! It seems an odd prejudice to have, but just one of the obstacles both Raju and Radha have to overcome if they wish to finally marry. 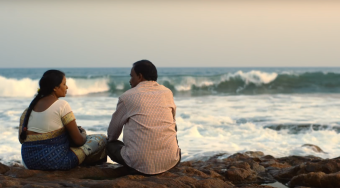 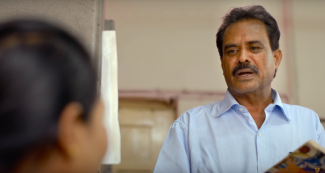 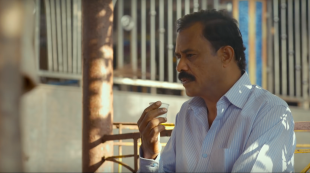 The film does become rather overdramatic towards the end, but the final scene brings everything together and all the melodrama suddenly makes sense. But although the conclusion is particularly pleasing and exceptionally well done, what is even better is the intertwining of the different characters and the realistic nature of each romance. The switch between the different romances may sound potentially confusing as the screenplay moves back and forth between each, but with Kancharapalem as a constant background this is never the case. Maha brings the audience totally into the time and place of the film and we can feel every nuance of the relationships as they unfold onscreen. 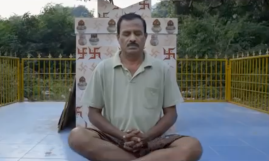 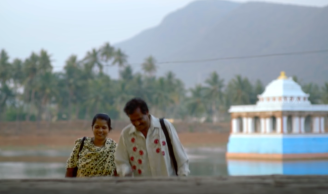 The music too is wonderful. Sweekar Agasthi’s soundtrack doesn’t feature pounding disco or more commercial songs, but instead takes local sounding tunes and Raghukul Mokirala adds beautiful lyrics that perfectly complement the action. It all fits together perfectly and provides the ideal background for the action. The actors are all impressive in their roles and the untrained support cast are fantastic too. This really is a wonderful film where everything comes together flawlessly and it’s no wonder it was part of the line-up for this year’s New York Indian Film Festival. This is one not to miss – seriously good cinema!