Sameer is an interesting attempt to make a political thriller that delves into the reasons for radicalisation and subsequent acts of terrorism carried out by young Muslim men in India to-day. Unfortunately, the film fails to deliver, mostly due to a surfeit of clichés in the characterisations but there are also some major flaws with the plot that derail the political agenda. Where Sameer does work however is as a thriller, and Dakxin Chhara does a good job with keeping the tension high in the second half as the ATS try to stop the terrorists and their bombing campaign. Mohammed Zeeshan Ayyub is excellent and despite the rather flawed reasoning behind his involvement in the bomb plot, it’s his performance as a mole within the terrorist group that makes Sameer worth a watch. 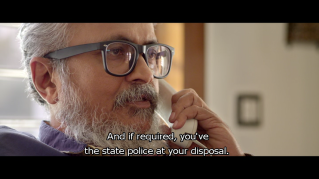 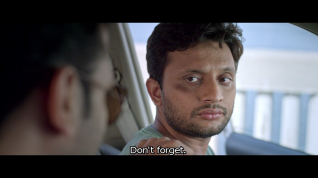 The film starts in Hyderabad with a series of bomb blasts around the city, including in the area around the Charminar and Mecca Masjid. That seems an odd choice of location given the perpetrator is supposed to be Muslim, but it works in terms of shock value. The prime suspect is a young student from Ahmedabad called Yaseen Darji, and the ATS are quick to send in a team to track him down. However, the only person they find in the deserted accommodation block is Yaseen’s roommate Sameer (Mohammed Zeeshan Ayyub) and the ATS Deputy Chief Desai (Subrat Dutta) decides to arrest him as an accomplice. Sameer is brought back to the ATS headquarters in Ahmedabad, and Desai threatens his prisoner with torture if Sameer doesn’t attempt to find Yaseen and turn him over to the authorities.

There are a number of problems with the plot set-up but the most glaring is the assumption that Sameer will be able to infiltrate the terrorist group in Ahmedabad. He has no connection to the city and his only link, that of being Yaseen’s roommate at college, seems a very thin thread to pull. Desai illegally kidnaps Sameer, tortures and threatens him, and then dumps him into an unknown city to try and win the trust of a group of terrorists – it never sounds like a plausible scenario and the film compounds this by adding the stereotypical caricature of a Muslim terrorist to the characterisation of Yaseen’s older brother Shaheed (Chinmay Mandlekar). It just doesn’t seem likely that a government organisation such as the ATS would be given free rein to torture and kill unlimited numbers of citizens in their hunt for potential terrorists, while Desai’s reaction to later events is equally improbable.

Desai’s character is also a mess of contradictions. One minute he’s threatening and intimidating Sameer, while the next he’s trying to charm journalist Alia Irade (Anjali Patil). He’s fanatical about catching the terrorists and seems happy to commit any number of crimes in his pursuit of justice, but he’s such an unstable persona that it seems highly unlikely that anyone would put him in charge of sensitive operations. His scenes with Alia Irade are also painfully awkward, which may be intentional, but It would seem more probable that Desai would bluster and try to bully Alia rather than try to develop a relationship. Subrat Dutta does his best with each facet of his character’s schizophrenic personality, but Desai seems too flaky a character to be in such a critical role. 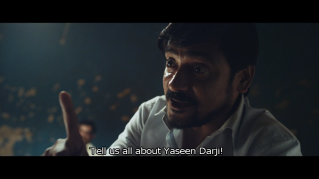 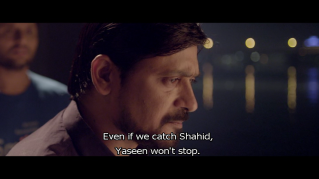 Sameer is instructed to find a way to stay with Yasin’s mother Mumtaz Khala (Seema Biswas) and gain the trust of Shaheed. Unsurprisingly Mumtaz doesn’t want anything to do with Sameer and refuses to let him stay, while Shaheed is suspicious of Sameer and doesn’t believe his declarations of support. As Sameer wanders the area he meets a street-theatre group who enact scenes of discrimination and social injustice, just in case the audience hasn’t yet realised that this is a marginalised community with plenty of reasons to be discontent. Mumtaz decries the violence and denies she has a son called Yaseen while Sameer cites the Gujarat riots and his father’s death as the reasons behind his brother’s radicalisation. This is politics drawn with a very broad brush and there is no subtlety in Dakxin Chhara’s description of a society under siege. Just in case anyone was still missing the heavy-handed symbolism, Manto’s (Alok Gagdekar) street theatre includes a young disabled boy, Rocket (Shubham Bajrange) who idolises his ‘grandfather’ Gandhi, and whose simple faith allows him to break up a potential fight between the Muslim and Hindu residents of the colony. You just know it’s not going to be a happy ending.

At the same time, journalist Alia Irade (Anjali Patil) is investigating the disappearance of 55 children 10 years ago during the riots, which allows her to mention these previous atrocities every time the subject of terrorism is raised. Her character is basically the ‘voice of reason’ who points out that every story has two sides. However, her attempts to humanise the terrorists are generally unsuccessful, mainly because the terrorists’ violence is directed against the local communities.  This has the effect of ensuring the terrorists really are the butchers Desai describes. I did like Alia’s uncompromising attitude and refusal to willingly help Desai in his crusade against Yaseen and his family, and the final twist to her story at the end is clever, although ultimately cynical and sad.

If you can ignore the clichéd political agenda and instead watch Sameer’s story as a straight-forward thriller, then it all becomes somewhat more palatable. Mohammed Zeeshan Ayyub does an excellent job with his cringing and pleading student being threatened with torture, and his later attempts to wheedle information from Shaheed and his mother are plausibly clumsy. Sameer isn’t a nice person and Ayyub doesn’t try to make him likeable, he just gives him a valid reason for acting the way he does and then gets on with it. His characterisation helps make the race against time to find the information about the bomb plot seem much more urgent than it really is, while his demeanour during the final scenes is chilling.

I wish Dakxin Chhara hadn’t tried to put so much politics into his film and instead left the story to speak for itself. So much of the window-dressing to humanise the terrorists and explain their back-story really wasn’t necessary and it all detracts from the really quite good thriller underneath. And there are good ideas here. The use of a high-pitched whine throughout and then after the bomb blasts works well, and the final scenes deliver a good twist to the story. The performances are good too – Mohammed Zeeshan Ayyub and Anjali Patil both suit their roles and Seema Biswas stands out in her small role. Sameer isn’t a great film but it does have it’s moments, and it’s always good to see something a little bit different, even if it doesn’t quite hit the mark all the time. 2 ½ stars.