Sukumar’s Rangasthalam is a sprawling rural epic set in the 80s and chock full of plot. There’s probably enough for two films, but despite being 80s influenced in running time too, I found it highly engaging.

Chittibabu (Charan) hires out a water pump to service the village crops. He’s a bit dim and lazy, very proud and impulsive, but essentially a decent bloke. And he has a hearing impairment that he is ashamed of. His inability to hear unless shouted at is used for comedy but also is important in keeping him a little isolated and clueless. When golden boy big brother Kumar (Aadhi Pinisetty) comes back from Dubai, he is appalled by the corrupt lending and eviction scam run by the local association. He gets the support of MLA Dakshina Murthy (Prakash Raj) and decides to run for President, setting up a colliion course with the incumbent (an evil eyed Jagapathi Babu). And meanwhile Chittibabu has fallen for the lovely Ramalakshmi (Samantha Akkineni). But does he have the time or the capacity for love when he has heroic duties to attend to and a brother to protect? And if it isn’t the President pulling all the strings, then who else might be involved? What is a simple man to do? 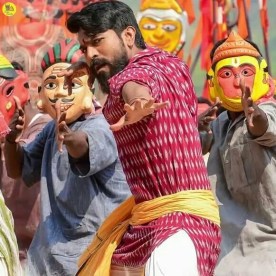 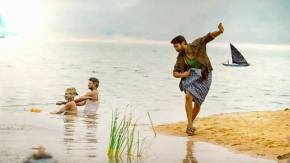 Charan was instantly recognisable even in the long aerial shot that opens the film. His hair is magnificent and deserves an acting credit. But apart from the mane of glory, he delivers a solid performance. Chittibabu is quite childish and demanding, but has a generous heart. He is only able to devote himself to one task or thought at a time though, which meant that the relationship with Ramalakshmi kind of disappeared for a while as he was busy with other matters. Charan and Samantha had a nice rapport and I quite liked seeing the man be disconcerted and flustered by being on the receiving end of some determined attention. And he did some truly excellent lovestruck prancing. But he is an 80s style mass hero and will not be winning any awards for feminism. The fight scenes are intense and brutal, with only a few fancy effects to diminish the reality. Predictably Charan excels in the action and dances, but that solid physicality also translated well to his character.
Charan and Aadhi were really nice as brothers. It would have been very easy for Sukumar to make Kumar the saintly one and Chitti the dumb one but they each had some elements of the other one’s personality and their little fights and jokes seemed natural and lively. Chittibabu had to grow up a bit through the film and Charan handled that quite well. I thought the hearing aid Kumar got for him was used nicely as an indicator when he decided to put personal vanity aside. Aadhi played Kumar with less bravado and more empathy than the younger sibling. His reactions when things turned violent seemed genuinely fearful, and true to the character. He found a groove to work in as the second fiddle in the film but the star of the family who absorbed all their attention. 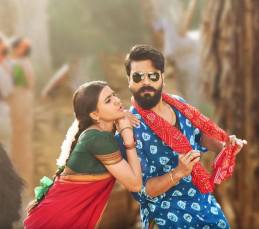 Samantha made Ramalakshmi funny and warm, the kind of girl that would always be in the thick of the chatter when there was a break from work. She wasn’t impressed by Chittibabu despite his obvious attraction to her, and somehow was the only person in the village who didn’t know he was hearing impaired. The comedy of errors stuff went on a bit too long, but I enjoyed her uninhibited enthusiasm, especially in Rangamma Mangamma where Ramalakshmi took on some of the typical hero pursuit song shtick. Samantha’s face is so expressive that even the terrible subtitles didn’t interfere too much with her scenes. The moment when she weighed up her father’s emotional blackmail against Chittibabu’s open door on their future was darkly funny and so good to see. It was sad that she along with almost every one else was then sidelined for a substantial chunk of the story. Because Hero stuff. 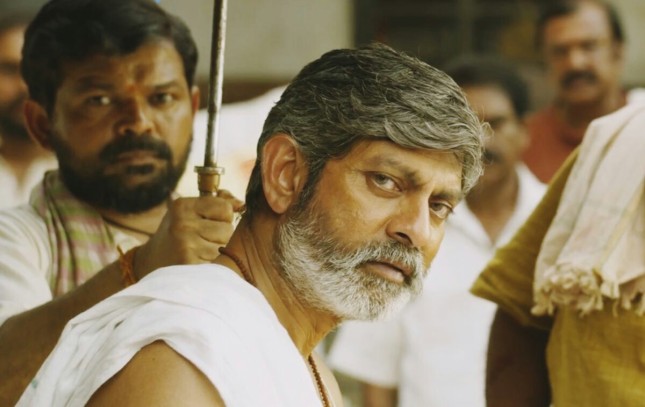 Jagapathi Babu is the villain this film needed. He infuses every scene with a menacing sociopathic coolness, and has no need of pointless histrionics. He has ample followers to carry out his wishes and can keep the dirty business at arm’s length. He’s like a shark. Something sends a chill down your spine on first sight, even if he doesn’t seem to be an immediate threat. Prakash Raj has a small but pivotal role, and is his usual reliable self. Brahmaji is his usual angry self as a government official. It’s good that some things never change. Mahesh Achanta, Rohini, and Anasuya Bharadwaj are notable in the large ensemble.

Sukumar did some interesting things within what does feel like a solid 80s mass drama. The women were often in the background but when it came to crunch time there was no fuss as they took a more active role or their expressions gave the men permission to act. Rathnavelu’s cinematography created a beautifully rural idyll with long sweeping views of the landscape but moved away from fixed camera positions in the action scenes, giving it a more modern and dynamic feel. The soundtrack is exactly what you’d expect, which is not a bad thing. I liked Charan’s dancing and thought he did well in the folk influenced choreo, maintaining his Mega cred while staying in character.
I learned some new phrases thanks to the (possibly drunk) subtitle team. I hadn’t heard of the Dazzle King or even the Mangoose, but now I feel they sound like something I should have known. And I will be wary of doctors offering the “eternal injection”. I know subtitles are a luxury, but surely someone read them before they were published. No?
I thoroughly enjoyed Rangasthalam. It’s a big meaty story that takes its time. The casting is good, the visuals are great, and in mass style the film has a bit of everything. Recommended!

One thought on “Rangasthalam”