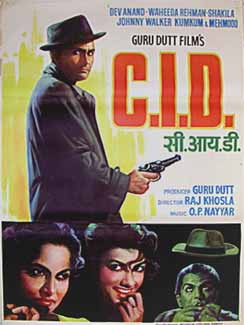 The film opens with a chain of instructions relayed via numerous phone calls, culminating in a death threat by Sher Singh (a young and dashing Mehmood). His intended victim is Shrivastav, a newspaper man who refuses to publish fake news. Timely. He calls Inspector Shekhar (Dev Anand) for help. Shekhar arrives minutes later with his taciturn assistant Ram Singh (Prabhu Dayal), only to find Mr Shrivastav dying of stab wounds. Petty thief Master (Johny Walker) was hiding under a desk outside the office when the murder took place and saw Sher Singh’s face. It’s all so economical and pacey – the opening throws you right into a world of shadowy identities and questionable motives.

Shekhar is set up as an insightful but not snobbish man in just a few lines exchanged with the regulars (including Tun Tun) at his office. He is very much a man of action but also has a sharp intellect and bursts of intuition. I was just thinking in one scene that it was all a bit coincidental when Shekhar pointed out the same thing. Dev Anand plays him as both world weary and alert, the detective who is rarely surprised but still finds people fascinating. Shekhar’s behaviour, even when he is wallowing in heroic self-pity, is quite rational. And he is prepared to trust people to do the right thing.

Shekhar commandeers a car belonging to Rekha (Shakila) to pursue the mysterious man seen near the newspaper office. She seems most put out and not at all interested in helping the police perform their duty, which is odd considering we later find out she is a policeman’s daughter. She throws the keys out the window, forcing him to stop. Of course they scandalously fall asleep in a sudden downpour that prevents key retrieval and wake up in time for a pastoral idyll lead by Minoo Mumtaz.Her father, played by K.N. Singh is Shekhar’s boss, which makes things interesting when Shekhar finds himself on the run. 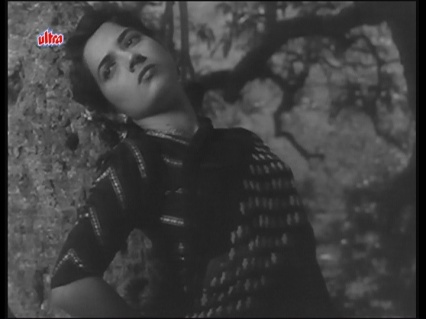 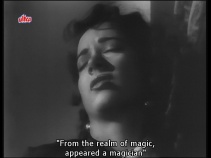 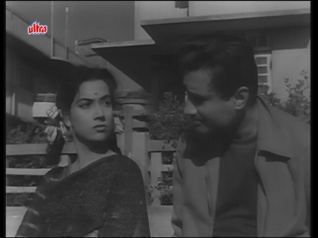 While Shekhar is distracted, Rekha finds the keys and drives off leaving him there. She is a scowly pouty girl, burdened with those unflattering compulsory pigtails. I found Shakila the weakest link in the cast. Her facial expressions can be used for a rather lethal drinking game called “Throes of Passion, or Gastrointestinal Discomfort?”

Shekhar seems not to mind Rekha’s shenanigans as much as he could, and uses street performers Sheela Vaz and Shyam Kapoor to facilitate his stalking. Hmmm.

Shekhar uses his connections to close in on the killer, but the mastermind behind this scheme has no intention of being caught. There is a troubling connection with Rekha’s family as the girl who spikes Shekhar’s drink and has him dumped by the road is her childhood friend Kamini (Waheeda Rehman). 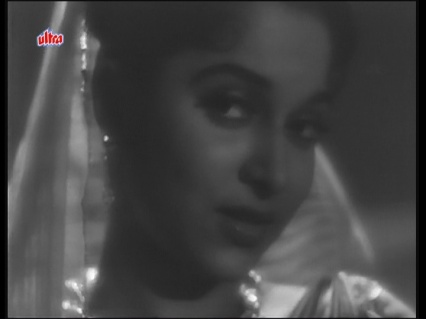 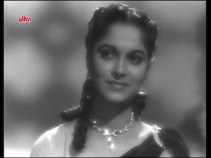 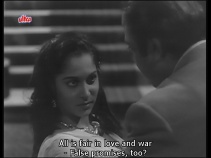 Rekha is just a placeholder heroine but Kamini is genuinely interesting. An orphan, she has been installed in a grand house by Dharamdas. Her motives are sometimes unclear, almost as though she is learning her own boundaries as things unravel. Shekhar tells her she is a strategist but not a killer and she seems to agree. Waheeda is of course gorgeous, and her performance is layered and interesting. Kamini has to distract Dharamdas (Bir Sakuja) in one scene and the brittle sparkle of her smile and the slightly forced dance all speak to what is at stake.

Johnny Walker and Kum Kum as his girlfriend offer a comedy track and social commentary on the honest criminals trying to get by. They interact with Mumbai in a way that is more direct and hands on than the others, and they know the ins and outs of the cops and robbers games.

Mehmood was most effective when he had no lines. He looked the part but sounds a little too hammy. It could be drug withdrawals I suppose. Anyway the boss takes no chances and has Sher Singh bumped off, and frames Shekhar for both murders. 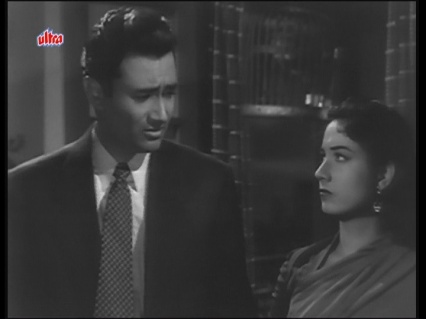 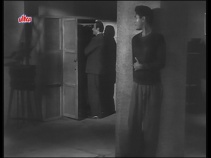 In the lead up to the finale, Shekhar escapes through a tunnel but the boss catches a glimpse of the door closing and follows. They play cat and mouse, with Kamini helping Shekhar find all the fake doors, secret switches and endless tunnels. All this appeared to still leave them at the top of the driveway so that was some design genius creating the illusion of space. The tension in this film comes from the chase, the evasion, the holding your breath ’til danger passes, and it really does hold up. It’s pretty clear who did what very early on and it is just a matter of whether Shekhar can join the dots in time, or who else may become collateral damage.

Produced by Guru Dutt and directed by Raj Khosla, C.I.D is an entertaining and engaging thriller. Pitting a suave Dev Anand against a shadowy criminal mastermind, the story is told with tempo and light and shade. Add in the lush O.P Nayyar songs, a young and minxy Waheeda Rehman dancing to choreography by Zohra Sehgal, Johnny Walker actually being funny, and there is so much to love. There are a few points of judicial process that seem unlikely, but not enough to detract from the overall enjoyment of an accomplished yarn. 4 stars!