I’m quite fond of hero uncle Jagapathi Babu and I always find Priyamani worth watching. They definitely make this more watchable than the material warrants, although I did enjoy the relatively low key look at relationships in this romantic comedy. The comedy is the unfortunate bit.

Recently returned from the US, Sasi (Jagapathi Babu) is taken out to meet many prospective brides. He is an educated man and his funky glasses impress, but he seems to struggle when presented with a modern opinionated woman who has ideas about her own life. But one day, while driving in the country, Sasi is drawn to a woman he sees working in a field. His friend Ravi (Sunil) tells him that is because she looks like his legendary ex-girlfriend Shailaja (Priyamani). 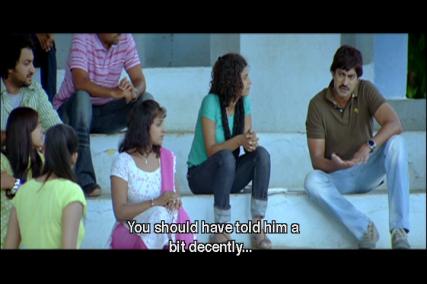 We are hurtled into the past where Sasi wears his hair in a down do, and everyone looks years too old to be an undergraduate student. Shailu is arrogant and none too kind to her suitors, humiliating one by reading his letter out to her friends while he listens. But she has a point that she shouldn’t have to reciprocate just because a guy likes her. Sasi tells her guys don’t like her because she is good at studies and things, it’s just because she is hot. Shailu is offended as she believes her superior qualities make men fall for her. Cue shower scene (for Shailu, of course).

Sasi sees romance and sex as biologically necessary but love is just a stupid human invention. At a temple festival Shailu sees only the beautiful spiritual celebration while Sasi spots the couples taking advantage of the crowd to cop a feel. She is intensely irritated by him yet seeks him out all the time (she knows she does both things and that annoys her too), and he seems quite unruffled although it’s obvious he is attracted to her. When a fellow student threatens suicide by jumping from a water tank, Shailu challenges him to do something to break up the crowd and their encouragement of the wild behaviour – so he kisses her. He sees it as a tactic to draw the crowds’ attention and stop them encouraging the boy to jump, but Shailu starts to see all of his past actions as hints of his love for her. 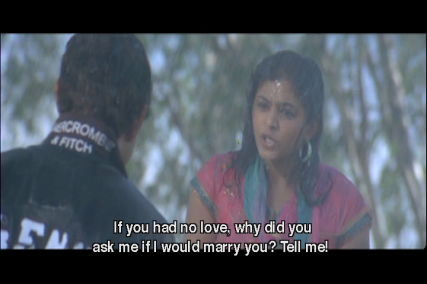 Shailu tells all her friends she loves him just as he arrives to laugh it off as a bit of silliness. Shailu insists that he is lying to conceal his heart, and a rainy goodbye is on the cards. Question – why did none of the friends run for shelter? Or use the handy umbrella lying there. Or just give them some privacy? Shailaja goes to transfer out of college, but he says he will leave and does. There is a lot of Goodbye Forever in this film.

Back in the present day Shailu is the very strict principal of a ladies college and gets introduced with a jaunty chorus of “Lady Hitler!” Oh dear. But she does wear some nice sarees. And I do question that one of her perceived negative characteristics is that she gets security to beat up eve teasers outside the college. Is that really worse than eve teasing? Anyway. Her school had been looking for a Zoology lecturer and Sasi just happens to be a world famous Zoology lecturer.

Will Sasi ever overcome his intimacy issues that he says stem from not being breastfed as an infant? Will Shailu ever get off her high horse? Please. Nothing is impossible when you have an entire college stationery cupboard at your disposal.

Sasi turns into a mansplaining fauxmenist at times, usually to prove Shailu wrong. So I sometimes found myself agreeing with what he was saying even as I was itching to give him a tight slap for being such an arse. According to this film women feel empowered once a man, most likely Sasi, has told them how and when they may do so. But then he tells a girl she is at least partly responsible for a boy trying to kidnap her so you know Sasi really is a Telugu film hero, albeit one low on biffo and machetes. Jagapathi Babu manages to play off that tension between genuine good guy and insufferable know it all very well. He has a likeable screen persona and he is a good actor. He cannot dance to save his life and generally refuses to even try, preferring enigmatic walking, jazz hands and occasionally fighting with the air around him. Although with lyrics like”her booty is bigger than a Mercedes Benz. Baby baby baby, she’s my best friend”, I can understand he may not have felt inspired.

While she gets a slightly better deal out of the soundtrack, Priyamani has a challenging role in some respects. Shailu is often extreme and inflexible, although she is clearly not a bad person. But having been humiliated once by Sasi, she has a dim view of humanity and believes she needs to keep herself and her students safe from those bad boys. 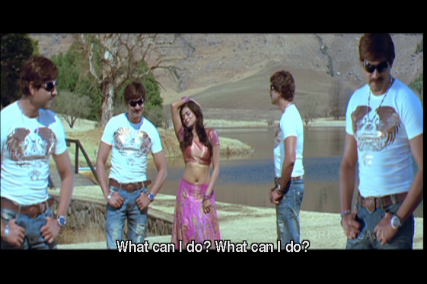 Shailu’s character bears the burden of silly decisions (and a few dodgy outfits) for the sake of getting the plot to where writer-director Madan wanted it. But Priyamani brought her own presence and nuance to the piece. Both she and Jagapathi Babu added their own touches to the roles and their rapport and interactions helped me find enough to respect in both characters that I could overlook the worst. There was more of a Much Ado About Nothing vibe to the relationship than a Taming of the Shrew and I enjoyed some of the verbal sparring. 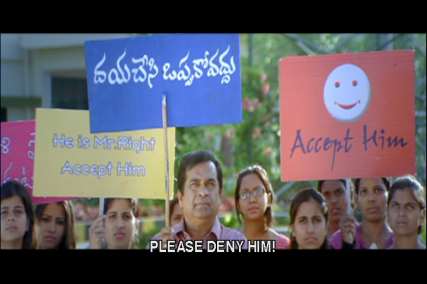 Unfortunately there are the tedious comedy tracks. Brahmi is in his element as a slimy teacher and does have the occasional good one liner. Ali is at his sleazy worst in an appalling racist, sexist, and homophobic skit set during a school trip to South Africa. Hamsa Nandini plays a glamorous married teacher with an eye for the professor, and is effectively coquettish as she irritate Shailu into fits of jealousy. Sunil is inoffensively amusing as Sasi’s mate Ravi, and does his usual bewildered shtick.

I like the leads, and am slowly working my way through as many of their films as I can track down.  Both the story and style of the film are quite engaging, and the fast forward button was made for those moments when Ali suddenly appears in tribal getup. See this if you like the idea of a slightly quirky hero with a smart and articulate woman, or just want a bit more talking and less killing in your mass fare. Plus a lion. 3 ½ stars!