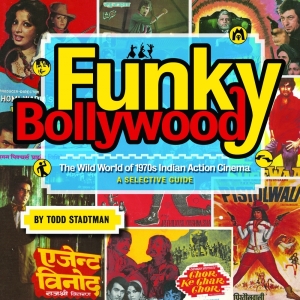 I was chuffed when Todd Stadtman kindly sent me a review copy of his book. Not just because the book is fabulous (What a relief! I don’t have to be polite – it is really well done!), but also because Todd is the reason I first watched Pistolwali. A debt of gratitude of such magnitude is nigh impossible to repay. 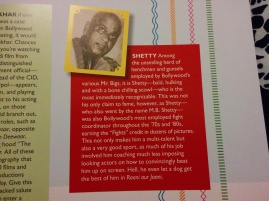 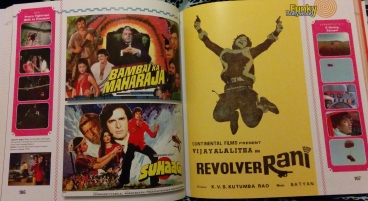 Stadtman intends Funky Bollywood to be ‘the “gateway drug” into the world of Indian action cinema’, which is one of my favourite worlds. If you don’t know where to start, Todd’s guide could help you decide how to first dip a toe into the waters. If you’ve been there done that, enjoy the quips and asides as you spend time with some familiar faces.

Saturated with colour and illustrations, dotted with random facts and wry observations, the book has one thing that a masala film can often lack. Logic and structure. Opening chapters give a brief overview of the who’s who of the era, and has an excellent additional feature I would like all DVD manufacturers to adopt post haste; symbols representing recurring themes found in each film. 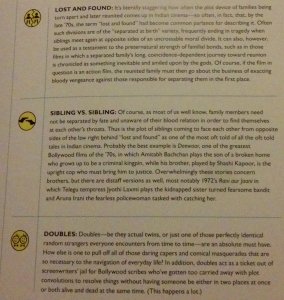 Imagine how simple it would make selecting a film if you could pick the one with Helen, a lair and some separated siblings? I know that around 60% of the time you could select ANY 70s Indian action film and get that combination but sometimes I don’t want to take a punt. Amusing and insightful reviews of select film make up the remaining chapters.

Todd’s glee at the best (and not at all the best) films of the era leaps off the page. It’s a little like watching a film with a friend who knows what’s going to happen next and can’t wait to see your reaction. I particularly enjoyed the section on spy films and westerns as they also included a few of my Telugu favourites. There is a persistent spelling error (Telegu for Telugu) that belies the detailed and well researched content, which made me a little sad. But this is clearly a labour of love and a lot of attention has gone into every page.

Like a really good masala film, Funky Bollywood is wildly entertaining and you might even learn something along the way (probably nothing to do with medicine or science, but other stuff). My cunning plan is to leave it lying around at home and wait for the unwary visitor to pick it up. I’ll have Parvarish in the DVD player before they know what hit them!

If you’d like your own copy, it’s available on Amazon or via the publishers Fab Press. And do pop over to the official Facebook page and say hi to Todd!