It’s heartening that the Indian Film Industry is producing more female-centric movies with the last few years having seen an increasing number of releases featuring a woman as the main lead. Even better, these are strong and independent women who don’t need to be rescued by a hero and can solve their problems by themselves, thank you very much. Queen is another film to add to the list, and a very worthy entrant it is too. In a somewhat similar vein to English Vinglish, Queen tells a story of self-discovery, but in this instance the protagonist is a young bride, jilted just before her wedding. Rather than bemoan her fate, Rani (Kangana Ranaut) packs her bags and heads off to Europe on her honeymoon by herself. It’s a charming look at Rani’s journey, both the physical trip and the metaphorical voyage, that doesn’t follow the expected path despite a number of frustratingly stereotypical characters along the way. I loved Kangana’s quirky take on an innocent abroad and her coming of age story is endearing and at times familiar as she negotiates her  way through the streets of Paris and Amsterdam.

The film opens with the preparations for Rani’s wedding to Vijay (Rajkummar Rao), a rather smarmy and chauvinistic engineer who met Rani in Delhi but is now living and working in London. The initial voice-over, filled with inanities from Rani as she contemplates the celebrations, her family and her approaching first night, is an excellent introduction to her character and is so very common place and normal that straight away you are drawn into her world. Vikas Bahl perfectly captures the excitement, apprehension and happiness of the occasion, and the first song is a lively and appropriate accompaniment to the celebrations.

When Rani is jilted, her family rallies round and is supportive of her decision to go to Europe alone. I was expecting some parental opposition but everyone seems happy to let Rani go, even though she has spent the previous 24 hours hiding and crying in her room.

What wouldn’t be a big deal to anyone else is a huge adventure for Rani and her amazement at the sights of Paris and Amsterdam is infectious, although I did have to wonder that a resident of Delhi had issues crossing a road in Paris. India is a much more confronting place as far as traffic goes! 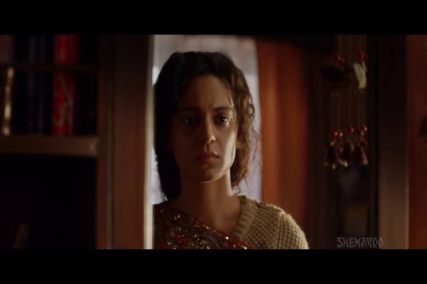 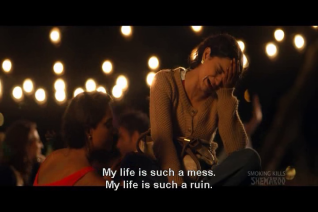 In Paris Rani meets a young French woman Vijayalakshmi (Lisa Haydon) who introduces her to Paris nightlife and starts to open her eyes to the possibilities of a more independent life. Lisa Haydon is excellent, although her introduction scene is rather more dubious. However, just when you think the film is about to tread a well worth path featuring a shameless Frenchwoman and loud scenes of intercourse, the film switches direction and Vijayalakshmi turns out to be a more interesting character than first impressions would suggest. Of course there is still the stereotypical portrayal of her European loose morals, since she is an unmarried mother who likes to go out clubbing, but Lisa Haydon gives her character plenty of soul and a caring nature, which helps win over Rani’s initial mistrust.

The relationship between the two young women evolves very naturally and doesn’t fall into the plot pitfalls that loom once Vijayalakshmi takes Rani out drinking. My favourite moment is when Rani climbs up onto the bar to dance, and after twirling her cardigan striptease style, rather than toss it away, she stuffs it into her bag instead. Then dances manically to the strains of a remixed Hungama Ho Gaya. It’s such a classic moment and I totally understand what was going through her head right at that moment! It’s a major strength of the film that Kangana is completely immersed in her character and is such a ‘normal girl on her first adventure away from home’, making it easy to relate to her experiences and understand her reactions. It’s not flawless but it feels genuine and Kangana captures that mix of wonderment, elation and confusion perfectly.

Rani moves on to Amsterdam and therefore there are the expected scenes in a sex shop and with a prostitute who of course is working to send money home to her family. But in contrast to these clichéd moments, the developing friendship between Rani and her three hostel roommates is fresh and unexpected, particularly since all three are male! Mish Boyko as Russian Oleksander, Jeffrey Ho as Taka and Joseph Guithob as Tim are an unlikely trio of friends, but they help Rani discover her self-confidence, and support her new-found independence without any schmaltzy romance or unnecessary posturing. I love the interactions between the three as none of them speak each other’s language and also struggle with English, which reminds me of so many incidents in my own travels and keeps the film moving in unexpected directions. The characterisations do threaten to fall into very well-worn stereotypes, but they are spared by the spontaneous feel of the dialogue, and if nothing else, at least they are a hundred times better than the usual portrayal of foreigners in Indian films.

The support cast is excellent, particularly Rani’s family in India (Yogendra Tiku as her father, Alka Badola Kaushal as her mother and Chinmaya Agrawal as her younger brother) but the star here is Kangana, who completely sheds her neurotic persona perfected in previous films. She appears very genuine and natural throughout, with no sense of artificiality in her gradual shedding of inhibitions and development of confidence. The development of Rani’s self-awareness is well written but comes to joyful life with Kangana’s portrayal. She also is credited with writing some of her own dialogues, which, even with subtitles, are encouragingly realistic and non-filmi. Kudos too to Rajkummar Rao who is perfectly shallow, petty and immature in the role of Rani’s ex-fiancé and maintains his obnoxious personality right to the very end.   The music by Amit Trividi is also excellent and the songs are well placed in the narrative, keeping the flow and adding more layers to the story. The late Bobby Singh has also expertly capture of  the streets of Paris and Amsterdam in beautiful detail, although the cities did seem rather sanitised in comparison to my own experiences. Not too sure about the boots with this dress, but this is a beautiful song, and I love the expressions on Rani’s face as she meets and then farewells her friends – perfect!

Queen is a film with much to enjoy, most of it due to Kangana’s portrayal and her character’s travels through Europe, although the writing, direction and editing all perfectly align with the superb cast. The emotional journey is just as entertaining as the physical one, and I love the optimistic and up-beat ending.  Definitely one to watch with girl-friends, but Queen is much more than a chick-flick and I recommend it to everyone who wants to see something a little different. 4 ½ stars.