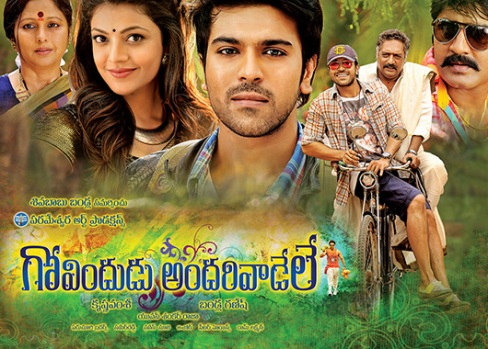 Soaring melodrama, fantastically colourful sets and Prakash Raj are the stand-outs from GAV. Add in Charan, who has definitely improved on his emoting, and you have the bones of Krishna Vamshi’s family drama that mostly delivers what it promises. There are plenty of emotional scenes as Abhiram (Charan) attempts to reunite his family in England with the rest of his estranged relations in India, and of course there’s some local trouble and a romance thrown in for good measure. While most of the film seemed to live up to Krishna Vamshi’s preoccupation with family values, there are a few scenes here that seem to be a hold-over from a less pc era, and stand out as glaringly sexist and just plain wrong. However the rest of the film is entertaining enough despite a storyline so overused that the lack of subtitles was really never an issue!

The story opens with a déjà vu from K3G as Abhiram demonstrates just how well he can play rugby when the opposing team fail to follow the rules of the game and actually attempt to tackle. Real rugby players end up covered in mud and crushed under a few tons of Welsh full-back in my experience, but apparently not in Vamshi’s world. Abhiram lives in a very nice pad in London with his father Chandrasekhar (Rehman) and his little sister whose name I didn’t catch. Unfortunately Chandrasekhar misses out on an appointment to be Dean of Medicine at a London University and interprets this as karma due to an old rift from his own father.  No academic politics in Vamshi’s world either then, I presume! 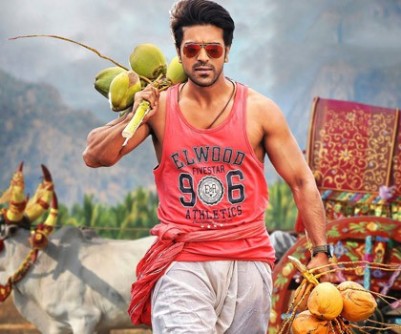 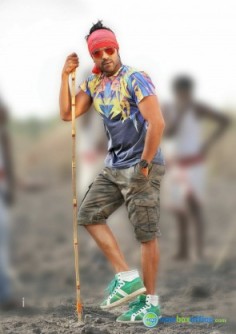 Overnight Abhiram decides that he will be the one to make all right for his father, and heads off to India to do what he can to bring the families back together. Sadly though, he doesn’t take time to remove his rather odd pony-tail which I can only assume must have been an attempt to look ultra-hip and cool – London-ishtyle. Not my favourite look for Charan, but it did grow on me as the movie went on. 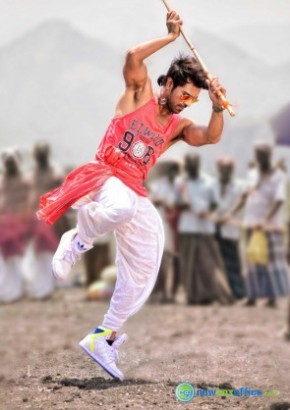 Things definitely look up once Abhiram makes it to India, does all the usual touristy things, and then heads off to his grandfather’s village. Following the standard family reconciliation template, Abhiram makes contact with the rest of his family anonymously by pretending to be a visiting agricultural student who wants to learn from family patriarch Balaraju (Prakash Raj). Balaraju runs his family and the village with a benevolent but very traditional hand while stopping his brother (Kota Srinivasa Rao) from clearing and developing the area. Living in the wonderfully pink and majorly over-decorated mansion is also Chandrasekhar’s wastrel brother Bangari (Srikanth): a man with an unfortunate propensity for mesh singlets and garish shirts. Oh, and he drinks, gambles and tries to kidnap and rape his potential bride, Chitra (Kamalinee Mukherjee). This is one of those scenes that really should never have made it in to a film in this day and age, and it does feel completely anachronistic with the rest of the story. Equally disturbing is Abhiram’s use of some photographs he has taken of his cousin Satya (Kajal Agarwal) dancing in Western clothes as a way to blackmail her. This is straight out bullying and sexual abuse, and I find it hard to believe this got past the censors in an otherwise ‘family-friendly’ film. Thankfully Satya does manage to effectively deal with Abhiram’s harassment, but it makes their subsequent romance initially less believable and Abhiram appear as a bit of a prat. 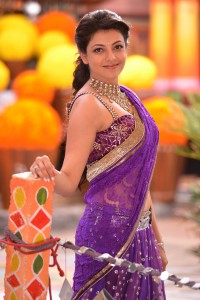 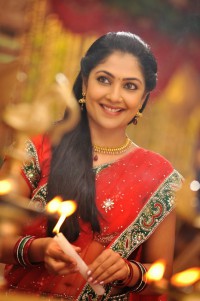 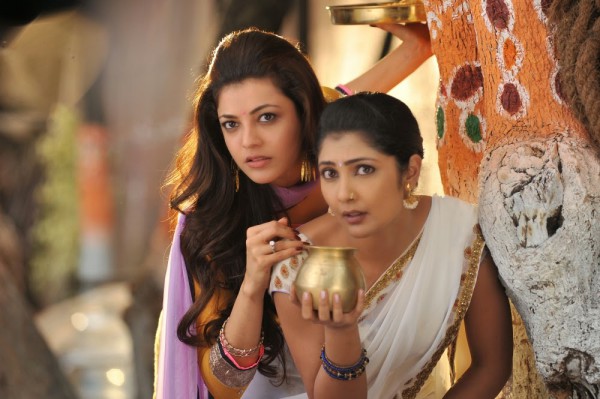 The rest of the film is much better, and that’s mainly due to excellent performances from Prakash Raj and Charan. Prakash Raj is perfect as Balaraju and he knows exactly how to play the strict but compassionate head of a large family. He never puts a foot wrong and wrings every possible drop of emotion out of his time on screen. He even manages to make stick fighting and motorbike riding emotional events, as he unknowingly bonds with his grandson. Jayasudha is just as good as Abhiram’s grandmother, and again she manages to take her overly emotional scenes and tame them down to something more realistic and believable. 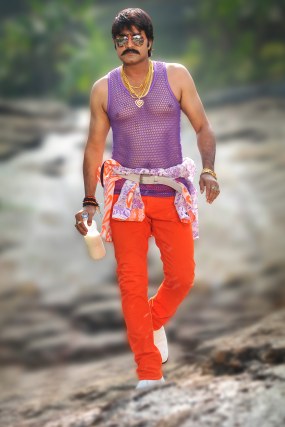 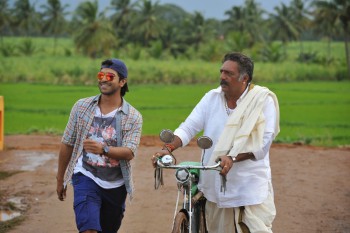 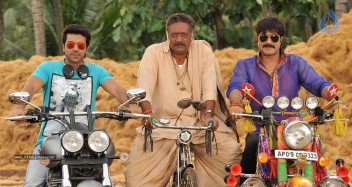 Charan gets a chance to show that he can play more than just an action hero and he definitely rises to the challenge. His Abhiram has more shading than other characters I’ve seen Charan play, and he conveys plenty of emotion and feeling in his speeches, even though I couldn’t understand a word! Despite the initially rocky start, there is plenty of chemistry and some major sparkage in the romance between Abhiram and Satya. Charan is one of the few actors that interacts well with Kajal in this respect and their romance really does light up the screen. Charan does manage to stick close to his real love though, as seen in this song mainly set in and around Petra. I wonder if it’s written into every contract that he must get at least one scene with horses? Kajal gets rather short-changed in the choreography here, although Charan doesn’t actually get to dance much either and sadly most of the songs have more emoting than dancing.

The rest of the cast are all capable and fit well into their roles. Rao Ramesh, Posani Krishna Murali and Adarsh Balakrishna are part of Kota Srinivasa Rao’s opposing family but never feel terribly menacing. Adarsh’s character is mainly just very shouty and aggressive, and the various fight scenes, which appear to have been structured around rugby tactics, aren’t up to Peter Hein’s usual high standard. The film looks gorgeous though. The pink palace is amazing – Satya has a stunning peacock painting on her wall, and most of the other rooms are similarly adorned with fantastical artwork and gorgeous furniture. I would live there!

The emotional quotient does head into overload at times and the ending is particularly excessive, but that doesn’t really seem to matter since the whole point of the story is overblown sentiment. As a straightforward family drama GAV works well enough despite the cliché-ridden storyline and the strong performances help push it over the line. Well worth watching for Prakash Raj and Charan, particularly when you can marvel at the wonders of the pink palace as a bonus.