Vikramadithyan released in late July, but luckily for me it was popular enough for our local distributors to arrange a second showing in Melbourne. This was my first Malayalam film at the Monash cinema and I was impressed! Not only did we have numbered seat allocation (rare, unless at one of the big chain cinemas), but the film even had subtitles – a major surprise given that the friendly crowd had all told me there wouldn’t be any!  But no surprises as to why this film got a second showing.  Vikramadithyan is an all-round family entertainer with a little bit of something for everyone.  There is romance, comedy, action and drama in a well-paced screenplay that alternates smoothly between past and present to tell the story of the two protagonists – Vikram and Adithyan.

The story starts with Adithyan’s mother Lakshmi (Lena) and Vikram’s father Vasudeva Shenoy (Anoop Menon).  Both are police officers, although from the glimpses of Lakshmi at work, she seems to be more of a prison warder to me.  Vasudeva has been trying to get his mother to agree to a marriage with Lakshmi for quite some time but for some unexplained reason she doesn’t like the match.  Lakshmi wants to marry a police officer, and it seems as if any one will do, since she is happily swept off her feet by another police officer she meets – Kunjunni Menon (Santhosh Keezhattoor).  However Kunjunni is a thief and imposter, something which Lakshmi doesn’t realise until too late and the two are already married.  Meanwhile Vasudeva marries someone else (Charmila) and both couples have baby boys at the same time – Vikram (Unni Mukundan) and Adithyan (Dulquer Salmaan).  Kunjunni’s deceit, Lakshmi’s disappointment and Vasudeva’s jealousy are the basis for the rest of the film and act as a rationale for the events that ensue.

The two sons, Vikram and Adithyan, end up at the same school and begin a rivalry that continues throughout their childhood and into their adult lives.  They are both friends with Deepika (Namitha Pramod) who often acts as mediator between the two, and in Adithyan’s case attempts to stop him following in his father’s footsteps.  Vikram seems to have it all as the beloved only child, and in contrast his path to follow his father into the police force seems as smooth as it is inevitable.  It all comes to a head when they both try to join the police force and Adithyan’s comes to have a big impact on his future. 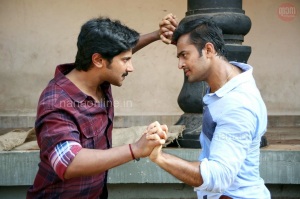 It’s a simple story but well told with great performances from the cast and good songs that fit so snugly into the narrative they seem to be part of the dialogue.  Jomon John provides some stunning images including a wonderful moment where Adithyan is sitting contemplating his disintegrating life when a squirrel pops up on the rock behind him and appears for a second in the shot.  This song also has some beautiful imagery and makes the most of the background scenery too.

Unni Mukundan plays it fairly straight as the morally upright son of a policeman and he has plenty of opportunity to flex his muscles and look faintly superior while Adithyan toys with a life of crime.  He’s a fairly straightforward character but Unni does manage to give him some light and shade and provides Vikram with more depth than I was initially expecting.  Dulquer Salmaan has perhaps an easier job with Adithyan as the characterisation is shaded more grey from the beginning and there is plenty of opportunity to develop the darker side of his character.  He still does an excellent job and manages to make Adithyan sympathetic, despite his flaws and tendency to blame his problems on the lack of a father.

The other cast members are all just as good, including the child actors who play the roles of young Adithyan, Vikram and Deepika, but Lena and Anoop Menon stand out as star performers in roles that require them to rely mainly on facial expressions and mannerisms.  They are both an absolute joy to watch and are the glue that holds the younger actors together.  Namitha Pramod’s Deepika doesn’t work quite as well as she seems a little too forgiving and accommodating, and smiles just a fraction too much in some of the more serious moments.  However she provides the requisite balance between Vikram and Adithyan and for the most part Namitha does a good job with what she is given to do.

Vikramadithyan deals with loyalty and friendship, but also touches on honesty and morality without becoming overly righteous or too preachy.  The benefits of hard work and getting a good education are emphasised while the old cliché that blood will tell is aptly refuted.   There is nothing outstanding about Vikramadithyan, which is exactly why it works so well.  The actors are all well balanced with no-one trying to outdo anyone else, and director Lal Jose makes each scene look effortlessly natural.   While the film does occasionally stray into rather idealistic territory, it’s still a good story and one that simply entertains.