I laughed, I cried, I clapped and cheered along with everyone else in the cinema, and finally I left with a big grin on my face.  Dhanush hits all the right notes in his 25th film with a full mass entertainer that has something for everyone.  This wasn’t the film I expected after seeing the trailer and despite a rather predictable storyline I was completely captivated by the infectious energy Dhanush brings to the screen.  Writer/director Velraj seems to have started with a blend of a number of previous Dhanush roles (he does seem to play the part of an unemployed layabout quite frequently!), but as the story develops the differences become clear and in any case, with the quality of the actors, any similarity ceases to matter.  What starts out as a family drama evolves into a full action adventure featuring snappy dialogue and perfect performances from pretty much the entire cast.   I loved every moment, from Raghuvaran riding his dorky cycle taking his brother to work, to the final shirtless fight scene and even the clichéd pre-interval ‘shock’ which segues into a perfect emotional response from Dhanush.  Paper-thin plot aside, this is a film to savour. 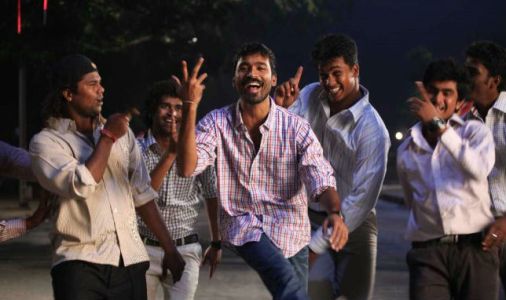 As the title suggests, Dhanush is the out of work loser in his family, with a father who fails to understand his ‘difficult’ son.  His younger brother Karthik (Hrishikesh) is taller, has a job and is held up to be the ideal son in stark contrast to Raghuvaran (Dhanush).  Samuthirakani plays their father and his disapproval is wonderfully understated, so that it’s hard to tell if his condemnation is genuine or simply masking concern for his jobless son.  Samuthirakani has a perfectly gruff and irritable exterior and escapes stereotype by the realistic alternation between criticism and approbation of his eldest son.  Meanwhile, Saranya Ponvannan is a stereotypical Southern Indian ma, but she is perfect in her role and makes much more of her character than seems possible at first glance.  In particular, her reaction to Raghuvaran’s fight with some hired thugs in her front yard is hysterical!  Again it’s little touches and Saranya’s ease of expression that lifts her role out of the stale and mundane, while such attention to detail in the characterisation ensures the appeal of the characters and bolsters the time-worn storyline. 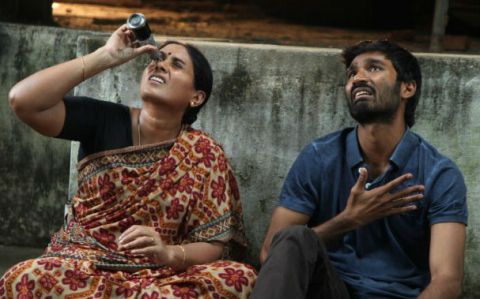 The first half of the film focuses on the family dynamics and Raghuvaran’s dreary days as he spends his time filling in job applications and doing the household chores.  There are plenty of lighter moments though as Raghuvaran looks after his dog Harry Potter, and tries to catch a glimpse of his new, reportedly attractive next door neighbour.  Velraj mixes small every-day occurrences with more significant events to gradually build a picture of Raghuvaran’s ambitions, morals and general mind-set which in turn sets up the rationale for the action in the second half.  Raghuvaran is determined to get the job he wants and not just take any work for the sake of becoming employed.  The only thing which seems to have any power to change his mind is his attraction to Shalini (Amala Paul) and their budding romance. 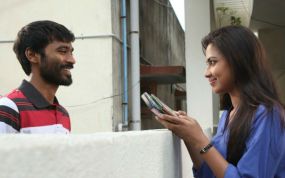 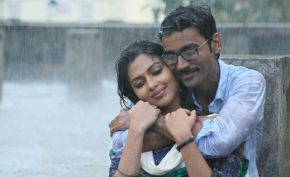 Amala Paul doesn’t have a large role in the film, but she turns in a good performance and has plenty of onscreen chemistry with Dhanush.  Their romance is sweet with Shalini taking the more aggressive role, and it’s a pleasant change to have a film where the hero isn’t a creepy stalker. Or at least not as soon as he gives up his telescope to his mother!

The second half follows Raghuvaran’s fortunes once he does find a job, and the whole dynamic of the film changes to more hero-centric action with slickly choreographed fight scenes and the requisite villain.  Vivek pops up in a fairly subdued role to add some mildly amusing comedy, and there is a second heroine (Surabhi) although her storyline peters out when the action ramps up.

Amitesh is Arun, the villain of the piece.  He’s a rich boy given control of his father’s company despite a lack of talent and what I would call nounce, and for various petty reasons and sheer spitefulness decides to eliminate his competitor in the world of building development.  It’s a tad far-fetched but I did like the rather brattish and petulant character of Arun which was a respite from the typical brutal world-domination style villains usually encountered.  Amitesh doesn’t really match up to Dhanush in terms of acting skills and it’s fairly obvious who is going to win any encounter, but the various plots and counter-plots are fun.  I also appreciated the fairly accurate representation of a visit to the optometrist and an eye examination in the second half since attention to eye health is rarely featured in movies! 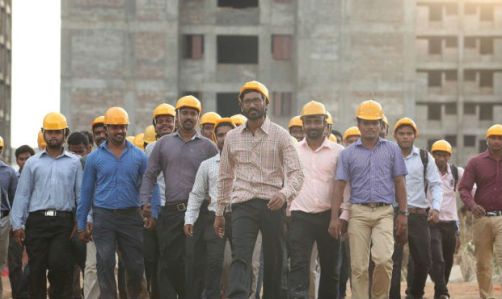 I’ve been listening to the soundtrack since it was released, and the songs are even better in the context of the film.  Dhanush dances up a storm and the choreography is well suited to the characterisation.  Udhungada sangu is probably my favourite but Anirudh Ravichander’s music and Dhanush’s lyrics (yay for subtitles!) are well matched to the screenplay and the songs are sensibly placed in the narrative.

The entire cast are all excellent but with a strong screen presence, Velaiyilla Pattathari is very definitely Dhanush’s film through and through.  He nails the role of Raghuvaran and as always I am completely amazed by his ability to make me believe 100% in his character, no matter how improbable or unlikely.  The interactions with his co-stars are flawless and when it gets to a long and simply brilliant monologue his facial expressions, body language and delivery all combine to make it one of my favourite scenes this year.  The mixture of comedy, action and drama, plus superb performances makes this one of Dhanush’s most entertaining ‘commercial’ films in recent times and I’ll definitely be heading back to the cinema to catch it again.  Highly recommended – I loved it!