Bheema centres on the key players in a gang and their interactions with rivals and police in Chennai. It’s quite a sanitised version of the criminal underworld, and little detail  is revealed about the nature of how these guys make a living. But it has two fantastic actors at the forefront, a delightful bromance, and a focus on characters that makes the who and why of the story more interesting than the what. 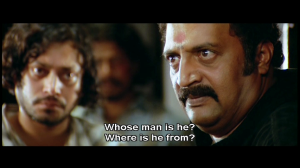 Chinna (Prakash Raj) is the local hard man. He started small in a small town and has risen to become one of the biggest crimelords in Chennai. His business dealings are never overtly discussed but he is presented as a ‘good’ gangster. He looks after the defenceless, his guys don’t attack women and children, and he plays by ‘the code’. Prakash Raj is perfectly cast. He makes Chinna likeable, roguish, aggressive and menacing by turns. Chinna is under threat from an old associate (Raghuvaran) and has an uneasy and crumbling detente with the local police. Things are getting tougher, but he is not one to back down. There is a lot more to the character than just being a figurehead, and I liked the glimpses into Chinna’s past, his conversations with old advisors, his wife, even the police, that showed different facets. He thought through the consequences, he reacted emotionally to some situations and I could understand the loyalty Chinna inspired because he seemed real yet powerful. I always enjoy seeing Prakash Raj in a more substantial role, and this is one of my favourites.

Sekar (Vikram) is an enigmatic figure, shadowing Chinna and despatching his enemies before Chinna can. The reason for his obsession eventually emerges via flashback, and it reinforces the notion that justice is not delivered by the law, and what makes a man is the ability to beat the living daylights out of another man. Sekar believes in instant justice, delivered as he sees fit. Even the police in Bheema argue that they can’t operate with the constraints of bureaucracy and low budgets, and have to break the rules to achieve what they see as justice. Sekar is given the name Bheema by the police in recognition of his strength and his role in Chinna’s life.

Sekar’s sole ambition was to one day join Chinna, his role model for strength and justice and a more satisfying father figure than his ineffectual policeman dad. I’ve often wondered why characters stick with their gangleader and don’t just leg it when things get crazy. Writer Sujatha provides a backstory and motivation that gives more to these guys than just being the good baddies. Vikram switches effortlessly from the full throttle action sequences to gazing mistily at Chinna or quarrelling with Shalu, and his physicality suits the invincible Sekar. Vikram’s rapport with Prakash Raj is one of my favourite things about the film and they play off each other very well.

It’s a man’s world, and sometimes in unexpected ways. Vikram steals the focus from the item girl in this song, and Prakash Raj is the one to be almost upskirted.

What sets Bheema apart from other grim gangster fairytales is characters having a life, or at least ideas, outside of the job. Chinna was in love with Padma but they drifted apart. Sekar, ever the loyal lieutenant, reunites them.

Prakash Raj does some delightfully girly fidgeting and stammering, and can’t hide either his happiness or trepidation at marrying his old flame.

Padma (Lakshmi Gopalaswamy) is gorgeous and her scenes with Chinna have a warmth and maturity that suits the slightly older lovebirds. They talk about the risks of her being part of his life, and she is firm in her assertion that she has no illusions. I found the dialogue rather flowery but the emotions came through and they seemed to have a deep mutual affection. He talks to Padma about Sekar, since Sekar is like family and Padma is in charge of the household. She and Chinna make fun of Sekar when they find out he is turning into a gooey romantic wittering about flowers, and their playful banter is another glimpse into the relationship.

Sekar loses his focus on being a thug when he starts to think of love and  Shalini (Trisha). He knows that his priorities have shifted and he can’t rely on himself to be as focussed, fearless and impulsive as he once was.  Chinna lets Sekar go, in a scene more like a breakup than an exit interview.

Unfortunately, Shalini (Trisha) is stupid and irritating for almost all her time in the story. I’m not sure why Indian film heroines characterise innocence by appearing to be dim-witted but Shalu is dumb as a box of rocks and about as interesting. Sekar falls through the roof into her courtyard one night, landing on her. Because of this, she decides he is the one, manufacturing reasons to be near him and imagining they share likes and dislikes based on absolutely no evidence. I did find her stalking Sekar mildly amusing just because it is a bit of turning the tables, but that was all I could see in her favour until quite late in the piece.

Once Sekar succumbs, Vikram and Trisha generate some chemistry and that made their relationship seem vaguely plausible. I liked that they had playful but still intimate scenes together as things developed, and it helped make up for the brain-dead start. 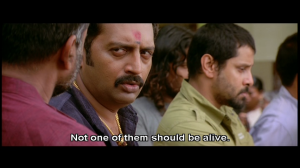 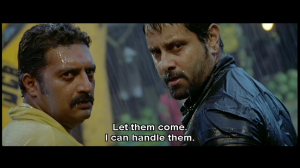 Chinna is a surprisingly sentimental old school don and sometimes that works against him, as he plays by rules others are starting to disregard. Sekar idolises Chinna and can’t abandon his old boss but feels compelled to take Shalini away. Once the other players sense weakness in Chinna, they start closing in. How will it all work out?

There are indicators. Shafi is in the support cast in Chinna’s gang. And Shafi does tend to play characters that bite the hand that feeds them. Also, I have developed a theory. In the imaginary Tamil Film Writing School in my mind, the compulsory class on ‘Ways to End a Film – Traditional (aka Everyone Dies (Rape Optional)’ is well attended. The final elective class ‘Ways to End a Film – Creative Writing (aka ‘No Rape, No Murder – stop being so lazy and think of something else’) falls the day after the big end of year dinner and people are either too hungover or they’ve already got enough credits to graduate, so most students don’t go. Thus there is generally one ending for a Tamil film, regardless.

I quite like the songs by Harris Jayaraj, but the picturisations of the romantic duets seem to exist mostly as a safe channel for the wardrobe department to vent their creativity.

The support cast includes so many reliable character players but the focus isn’t on them and I barely paid any heed to Ashish Vidyarthi, Tanikella Bharani, Shafi, or Raghuvaran among others. Chinna and Sekar dominate the story and Prakash Raj and Vikram likewise dominate the performances.

Linguswamy has directed an action packed film that doesn’t feel hurried or slapdash, and it is very satisfying to a point. The ending was a disappointment and yet almost exactly what I expected. The action scenes are typically excellent as is standard for this genre. There were some nice little extras – when Sekar belted a group of guys with a metal pipe, they chimed like bells as they dropped. The editing is good and the quick cuts and occasional use of effects enhance the sense of urgency or disorientation. It’s a very competent film and a pleasure to watch.

If you’re lukewarm on the South Indian gangster genre, this could be well worth a look. It has better than usual characterisations, some excellent performances and good production values. And one of the best filmi bromances. 3 ½ stars!

Heather says: I’m a fan of Tamil gangster films and usually enjoy anything by N. Linguswamy, but Bheema was rather disappointing all round. Instead of the usual well-developed storyline and strong characterisation I expect from such an accomplished director, Bheema staggers from fight scene to overdone fight scene without any real justification for the characters acting in the way they do. Rahguvaran is ineffectual as the ‘evil’ don Periyavar and his feud with ‘gangster with a concious’ Chinna seems clichéd and unimaginative. The second part of the film which concentrates on the new Police Commissioner and his vendetta against the gangs is more convincing but still seems formulaic and just not that interesting. The relationship between Chinna’s new lieutenant Sekar and the rest of the gang could have been made into something more exciting but instead it’s thrown in towards the end to try and spice up the climax. Something which only works to a limited extent. However, it’s good to see that Shafi continues his quest to always play the smarmy, self-satisfied sycophant and he does his usual thing here as one of Chinna’s men to good effect.

Despite the issues I have with the story, Bheema is saved to some extent by the excellent performances from Prakash Raj and Vikram who both breathe life into the film. I agree with Temple that their camaraderie feels very genuine and the interactions between the two do much to make up for the dreariness of the plot. Vikram’s character is very much the strong silent type and he does a good job with the rather dour Sekar, but Prakash Raj steals the show as the gangster with a heart. His romance is perfectly played and he brings out a human side to Chinna making him much more than just another world-weary gangster. Despite his good performance, Vikram looks rather over muscled here and I confess that I prefer him in more character driven roles such as in Pithamagan and Kasi where he has more range to work with. The one-man indestructible army of Sekar was just a little bit too much to take, especially with the distracting musical sound effects and overly loud soundtrack during the fight scenes.   The implausible relationship between Shalini and Sekar was another disappointment and the two never felt comfortable together –  odd, considering the considerable chemistry the two actors shared in Saamy. In fact there is much more sparkle between Chinna and Sekar!

Bheema does have a good soundtrack and there are moments where the film starts to grab your attention, but sadly they’re just not sustained. Worth watching once for Vikram and Prakash Raj but that’s all. 2 ½ stars.