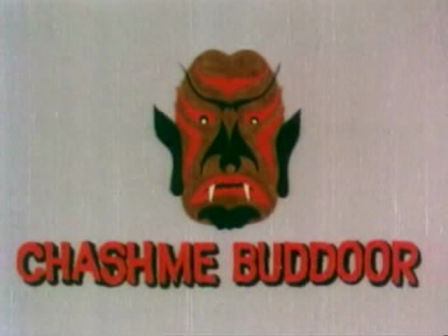 There is a joyful goodness in Chashme Buddoor that I don’t think would seem commercial enough nowadays when film comedy about female/male relationships seems to be mostly titillating or sleazy. Writer director Sai Paranjape has an eye for facets of speech and behaviour that she layers cleverly to make a slight story into a satisfying film. I can relate to the characters, their dilemmas and their sense of humour. There are filmi jokes, parodies and genuinely funny moments galore, plus a really nice love story.

Two clueless friends, Omi (Rakesh Bedi) and Jai (Ravi Baswani) think that romance happens just like it does in the films, and remain resolutely impractical in their approach to love. Their misadventures and air of genial cluelessness is a foil for the more serious Siddharth (Farooq Shaikh). And the filmi tropes they swear by – stalking, harassment, loitering in parks –  all fail. It is genuine interest and getting to know another person that might just win the girl. Eventually. 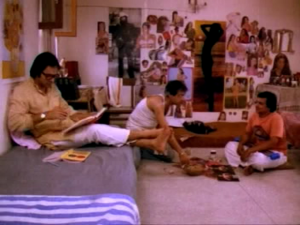 The three men share a small apartment, with all the usual trappings of bachelordom – a big empty kitchen, wall ‘art’ and the bare minimum in comforts. There are many enjoyable details in how they share cigarettes, their routine and schedules, their reliance on Siddharth to start the sole motorcycle. The male actors work beautifully in the ensemble scenes and each has a distinct style that suits their characters. It’s such a typical student household and they are each other’s family. Most of their experience with women is derived from ogling the rare female passerby from the balcony. Constantly in debt to Lalan Mian (Saeed Jaffrey) for their smokes, they alternate between bluff and avoidance as they try and get on with the important things. Like girls.

Neha (Deepti Naval) is one of the few real girls the boys meet. Omi and Jai set out to woo her, and despite having brilliantly scripted plans based on current best practice from the movies, both are sent packing. 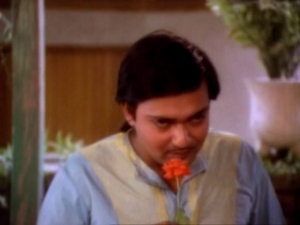 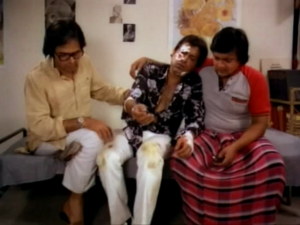 Omi fancies himself a poet and Jai pretends to be the younger brother of a film producer. Each gets a song showing their version of events, and I am especially fond of this parody medley.

Quiet studious Siddharth meets Neha when she is working in door to door marketing, demonstrating Chamko washing powder. They have a shy stilted conversation in which Neha carefully tells Siddharth where she can be found in the evenings and he just as carefully listens and remembers. Obviously this is a fantasy. 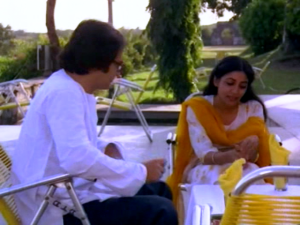 Their relationship grows through conversation and vast amounts of ice cream. Siddharth occasionally tries to act like his friends tell him to, but Neha challenges him and he immediately drops the posturing and admits he has no clue. It’s a nice unremarkable romance that grows unnoticed by friends and family. Until Siddharth gets his money order and decides to splurge on some fancy clothes. Blue velour? I know it was the 80s but still!

He is pleasant, abstracted but not anti-social and seems content to be the butt of his friends’ jokes. Unlike many other filmi heroes he can, and does, change course when he realises he needs to think of Neha as well himself. Farooq Shaikh is perfectly cast as the introverted and essentially good natured Siddharth, and also delivers the broad comedic scenes with playfulness.

Neha isn’t just sitting around waiting for a husband – she wants to study, has notions about her future and raises the subject of Siddharth with her dad to prevent him arranging an unwanted marriage. She is also quite clear on telling Siddharth that being a wife is not her immediate priority. Deepti plays her as a nice girl-next-door with a good amount of common sense, a dash of fun, and a smile that lights up the screen. She has a nice chemistry with Farooq too.

When the couple have the inevitable setback, Neha goes on despite her sadness and confusion. Siddharth is the one who loses his motivation, and unfortunately his friends decide to help him. And you will have to see the film to find out if they succeeded.

All the actors look right for their roles. There is no excess of glamour, or inappropriate wardrobe as far as I can tell. Saeed Jaffrey is lots of fun as Lalan Mian, the local paan stall owner and father figure. He can switch from berating Jai to lending him a bike so he can go chase a girl without pausing for a breath.

I loved his philosophical ruminations on debt and love, and he has such a twinkle in his eye. Leela Mishra as Neha’s grandmother seems to have a filmi streak like the boys, and has some very funny scenes. Vinod Doshi and Ranjan Grewal play Neha’s father and brother, and help show her as a girl with a sense of self worth and a warm and loving home. Even the waiter at Neha and Siddharth’s regular cafe approves with a smile. It’s all so likeable.

I mentioned the sly filmi references and tricks Sai Paranjape includes in her script. Whether she is having a character announce a flashback or using snippets of famous songs, she has a great instinct for comedy. I really enjoyed the special appearance by Amitabh in a demonstration of how to be suave as he sweeps Rekha off her feet.

I like the soundtrack by Raj Kamal a lot. The songs ‘Kali Ghodi Dwar Khadi’ and ‘Kahan Se Aaye Badra’ are used beautifully to show hope and disappointment, and Yesudas’ vocals are very expressive. There is also a song in which Neha and Siddharth sing in a park about people who sing songs in parks. And the onlookers actually do react as though the couple are a bit mad. Although I think these kids may have been given conflicting instructions.

The upbeat love songs are not really remarkable, but I enjoy seeing ordinary people act in filmi ways and how that would play out in a real environment. Another thing that made me oddly nostalgic was a very silly kidnapping subplot. Thinking on all the news from Delhi of late about women being abducted and assaulted, it did make me wonder about whether the 80s were really more innocent times. There was certainly a lot less traffic.

I’ll tell you now I am horrified by the idea of David Dhawan remaking Chashme Buddoor. I cannot imagine him making a scene with an overweight grandma accidentally flicking through Playboy seem funny. I can certainly imagine him believing he can, but the execution is the key. I don’t think it is just because Sai Paranjape is female that I can relate more to this story. After all, a woman wrote the recent Ranbir Kapoor vehicle, Bachna Ae Haseeno, and I thought that was mostly male wish fulfilment rubbish. But I do think she has an understanding of the internal emotional life of her characters that makes for a more interesting film, especially when the people are the focus.

Sai Paranjape is smart without being too clever, makes fun of her characters but doesn’t humiliate them, and as befits a romantic comedy, there is a lot of affection and happiness. The actors are charming, and I laughed all the way through the film.

Katherine at Totally Filmi is coordinating a month long celebration of women in Indian cinema. Links will be collated at Delicious so keep an eye on that page for lots of other articles and blog posts to be added throughout March.

Heather says: Chashme Buddoor is a very sweet film with realistic, likeable characters and a simple but effective story. I found it amusing rather than flat-out funny, but it did make me smile almost all the way through. The three flatmates are all well cast and it was great to see actors that I tend to associate more with smaller character roles get the screen-time they deserve.  I particularly liked Rakesh Bedi in this and his expressions alone were enough to make me start smiling before he even said anything. I think it’s the relaxed nature of the conversations between the friends and the way they interact with each other, but in many ways this film reminds me of the old British sitcoms of the seventies. I grew up watching (and loving) these and I got the same sort of ‘comfortable comedy’ feeling here.

As Temple has mentioned, a lot of the humour comes from the way many classic Bollywood conventions are parodied and there are many references to other films, although I’m quite sure that I didn’t catch them all. The parody song with Neha and Jai is just brilliant and I did enjoy playing’ spot the song’ as it went along. The main characters are all allowed to develop at their own pace and each has little quirks that make them seem like real people rather than conventional ‘filmi’ characters.  They’re also not at all glamorous and the guys either shop in the same store or seem to share shirts, which again falls in well with the whole student lifestyle portrayed. The splitting up of their room into three distinct areas by the various pictures on the wall was also something I remembered from my own days as a student in a shared room and was another very realistic touch.

I enjoyed all the music, especially the more classically based songs Kahan Se Aaye Badra and Kali Ghodi Dwar Khadi and agree that Yesudas’ voice works perfectly for these. The songs are all very well pictured as well, although there is a rather disturbing appearance by a bear in the song in the park which I really didn’t enjoy. All the actors were uniformly excellent and I particularly loved Deepti Naval as Neha. I was perhaps a little disappointed that she didn’t take more umbrage to Siddharth’s suggestion that she give up her washing powder job when they got married, but I could also see his point of view – it was a very good way to meet him after all! Chahsme Budoor is a very well made film with clever comedy and excellent performances. I cannot imagine a remake by David Dhawan being anywhere near the same quality or have any of the same subtlety. Much better to watch the original and step back to a simpler time. 4 stars from me.