I must confess upfront. My friend Jess appears as an extra and dancer in Ek Main Aur Ekk Tu, and without that motivation I probably wouldn’t have gone to see it. But I am so glad I succumbed to the friendly emotional blackmail! It’s a well constructed piece nicely executed by first time director Shakun Batra and writer Ayesha DeVitre. Imran Khan and Kareena Kapoor were appealing and relatable, and demonstrated their comic flair. The standard masala trappings of big songs, blingy costumes and unnecessary subplots are for the most part missing, but instead I was treated to some good character development and writing with a slightly unconventional and very pleasing end.

Jess told me that she did ‘something’ in the opening scene but wouldn’t say what. If you’ve seen the film, the young lady giving birth is Jess. That was definitely unexpected. My friends (one of whom is very pregnant) and I cheered along as Jess grimaced and puuuuuushed! 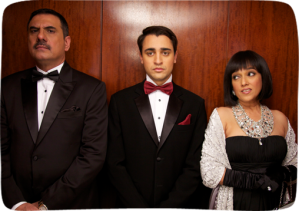 Rahul Kapoor (Imran Khan) is introduced in a neat montage with a voiceover describing his childhood. With a distant demanding father (Boman Irani) and a vain socialite mother (Ratna Pathak Shah), Rahul learned to do what was expected and to navigate his parents ambitions. He grows into a nervous young man who never voices his opinions let alone acts on them. Drifting into a career as an architect, he moved to Las Vegas. Sadly his lack of passion for the career translated into lack of success and he was sacked. His instinct is to hide the truth from his parents and try to cope alone but he lacks the self belief to get going again. His dad’s friend, and indeed everyone else when asked, seems to think the cure for his malaise is sex and lots of it. Rahul is uptight, prissy and unlikely to heed this helpful prescription. He would think wearing un-ironed socks was totally wild behaviour.

Riana Braganza (Kareena Kapoor) is messy, extroverted, and affectionate. She rockets through life dealing head on with whatever setbacks she encounters and changing course as she deems fit. She has recently broken up with a boyfriend and it seems to have also made her break up with their friends who she accused of spying on her. She is looking to start again and get her life and career as a hairstylist back on track. Her parents are supporting Riana financially and emotionally after her break up. They talk openly about her relationships and dreams and she seeks their advice without feeling obliged to follow it. 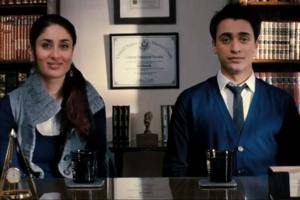 Of course these opposites meet, and predictably enough Riana turns Rahul’s life upside down. There are several contrived plot set ups to bring the pair together and to keep them in contact, including a drunken Vegas quickie wedding. I have a sneaking fondness for the Elvis wedding celebrant idea. One of my friends got married there as he and his wife are atheists but they both believe in Elvis. Even though the catalyst was so filmi, the friendship between the pair felt quite substantial and the way the relationship developed was quite organic. Unlike other films where I have wondered why people stuck together, I believed that they were drawn together for a number of smaller reasons that eventually amounted to a significant bond.

Sensing that Rahul needs a break, Riana persuades him to come back to India with her when she visits her family. This eventually brings the story to crisis point. Is it friendship or love he feels? Is she just a compulsive hugger or does she have feelings for him? What will he do about his parents with their unrealistic expectations and social pretensions? If someone loves you do you feel obliged to love them back? It is so refreshing to see characters having some mature conversations about their feelings and what they might mean.

Imran has a youthful good boy look that suits Rahul, and initially seems withdrawn and listless. He loosens up and becomes more impish and demonstrative as Riana draws him out. He has a few moments of cutting loose where he seems to channel the Muppets, and generally hits the spot in his dialogue delivery and expressions. I particularly liked Rahul’s fixation on his teeth. At one point Riana tells Rahul that he is perfectly average – a compliment meaning he was balanced and didn’t do anything to excess. I think that sums it up. Imran gives a measured and deft performance in a film that has no real extremes.

Kareena’s performance is just right in terms of energy and sparkle, and she delivers the more emotional scenes with restraint and intelligence. There are shades of Geet from Jab We Met but Riana is more mature and self aware. Kareena’s rapport with Imran seems quite spontaneous and reinforced the feeling that I was seeing a friendship developing.

The story pivots on Rahul and Riana so the support cast is minimal. I really liked not having an unnecessary subplot. The actors who played Riana’s crazy family were all good, and they helped cement the sense that Riana was a real person and very much the product of her upbringing. There is one character who might fit the comedy uncle designation, demonstrating the vulgarity of the Kapoors’ social milieu, but he was a minor irritation. Boman Irani and Ratna Pathak Shah have perfect timing in their reactions.

The visual design is clean and uncluttered. There are some cute calendar graphics to illustrate the days as they pass, and they suit the laid back modern quirkiness of the story. Shakun Batra uses some wonderful shots of Las Vegas, and I liked seeing the overseas location treated as more than just a song backdrop. When the action moves to India the interiors are perfect for the two families and contrast their vastly different backgrounds. Both Imran and Kareena looked the part, with costume design that was mostly flattering and appropriate.

There are some nifty touches. For example, when Rahul is talking to his dad there is footage of a lion killing a zebra playing in the background, with the action in that sequence matching the ebb and flow of the dialogue. Or when on a date with Rahul, the girl (an old flame) sends a text to ‘Avantika Malik’ saying how dull he is. It’s a well thought out film, with a high level of craftsmanship.

The soundtrack by Amit Trivedi (lyrics by Amitabh Bhattacharya) is OK but a bit heavy on acoustic guitar and navel gazing. The songs do fit in the drama and the lyrics – while unsubtitled – seemed relevant from what I could make out. Aunty Ji is a highlight for upbeat fun and cheesiness. Imran has clearly been working really hard on dancing and looking like he enjoys it. Plus Jess – post ‘childbirth’ and now a backing vocalist and dancer! Yay!

Given there is usually only a choice of two possible endings, romantic comedies rarely surprise. Ek Main Aur Ekk Tu gave me some characters I liked, actors who did a very good job at realising their roles, an entertaining journey and a conclusion that was fresh and satisfying. It’s not a ground breaking masterpiece, but it is a pleasant and intelligent film. Recommended!