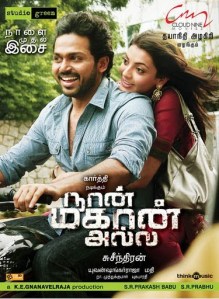 Naan Mahaan Alla is the fourth film release for Karthik Sivakumar (aka Karthi) and the second for writer director Susindran. The film starts off as a romance but ends up as more of a crime thriller, with Karthi’s character the main connecting factor.  As such, it’s very much a film of two halves and I find it disjointed as a result. However there are some good moments as Karthi puts in a strong performance and Kajal is entertaining while she is around.  I like that the film is set and filmed in downtown Chennai, as it means there are locations that I recognise from my trips to the city. It makes parts of the film feel more realistic, and considering it’s supposed to be based on a true incident is probably  Susindran’s intention.

It starts with an attack and implied gang rape of a girl by a group of pot-smoking, drunken college students who seem to routinely indulge in these vices. The attack occurs by the beach and the use of buildings apparently damaged by the tsunami for this adds to the bleakness and harshness of the scene . 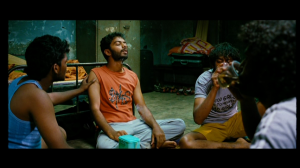 Up to this point it looks as if the film will be a gritty crime drama, but after this short but brutal introduction, the film switches gears completely and concentrates on the romance between Jeeva (Karthi) and Priya (Kajal Agarawal).  The two meet at the wedding of a mutual friend and Jeeva is immediately enamoured with Priya.

Priya is  intrigued by Jeeva’s practical and down to earth manner and the two quickly progress to a relationship. There are complications though. Priya’s father is a lawyer and isn’t impressed by his potential future son in law, despite agreeing that if Jeeva gets a job he will reconsider their possible marriage in 6 months time.  In a rather unlikely scenario he goes so far as to call in crime boss Kutty Natesan to ‘persuade’ Jeeva to look elsewhere. This technique fails when Jeeva and Natesan end up becoming friends, which is just as unlikely but does give Jeeva a much needed ally in the second half of the film. 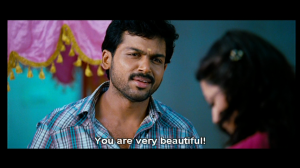 The romance between Jeeva and Priya is sweet and more realistically depicted than usual for a filmi love story. Kajal and Karthi have good chemistry with each other and their relationship is convincing in its simplicity. There is perhaps a little too much time spent establishing that Jeeva is a nice guy, blowing kisses at babies and buying chocolate for sick kids, but Karthi does a good job with his guy-next-door role. Kajal is lovely, looks the part and never has to dance which, along with a generally good wardrobe selection, makes her look more elegant.  I really like her here and it’s a shame that she doesn’t have more to do, although I do appreciate that Susindran didn’t just add in a heroine to make her another victim later on in the film.

Having set up the relationship between Jeeva and Priya, post interval the story switches back to the gang of youths from the opening sequence and basically ignores the romance for the rest of the film. Interestingly Susindran reportedly found a few of the actors he cast as the students when they were standing on a street in Chennai, although Vinod Kishan has played the role of a murderer before as  the young Suriya in Bala’s Nandha. Despite, or perhaps as a result of their collective lack of experience, the guys playing the murdering students really were effective in their roles as ruthless, callous killers and Susindran’s selection process seems to have worked. There is another first time actor, as the role of Natesan is played by cinematographer Arulhdass who also does a great job in front of the camera.  However despite good performances by all involved, the story starts to lose its way in the second half as there are a number of inconsistencies and gaping holes in the plot.

Jeeva’s father is a taxi driver and gets involved in a peripheral way with the gang’s abduction and murder of yet another girl and her partner. 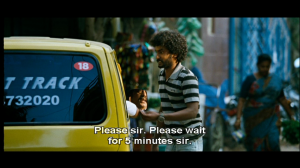 The gang dismember the bodies and throw them into the local tip in various separate bags. The guys don’t seem to be at all disturbed by chopping up two bodies, one of whom is supposedly a friend (unlike similar scenes in the 1994 film Shallow Grave which has my favourite realistic body disposal scene) and are also not concerned about betrayal by each other. Perhaps a bit more depth to the characters of the students here would have helped to make the story more convincing but as it is they appear only as disposable and interchangeable as all villains seem to be. Despite all their efforts, it’s not long before the police discover various body parts, although there is no mention of why the investigating officers decide to look so closely at the tip.  It looks as if they use a local dump to film the search and discovery scenes here and it’s so vivid with the flies and piles of rubbish that I could almost smell it. 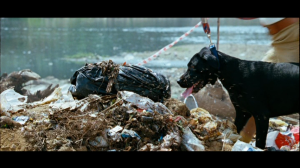 The gang decide that Jeeva’s father may be able to identify them so take the rather drastic step of organising his murder. Unlike their previous crimes, for this one they need the Dhana’s uncle, a plan drawn in chalk on the floor and a cyanide painted shard of glass.  It all seems excessive and the set up for the murder takes up a lot of the second half. The issue of Jeeva’s father recognising them seems too contrived as the gang appear more self-centred and focused on entertaining themselves rather than concerned. Besides, if Dhana just cut his hair I’m pretty sure he would be much less memorable.

The plan (which apparently could only have been thought of by one of 4 master criminals in all of Chennai), does work and a devastated Jeeva takes it on himself to discover the identity of his father’s killers. Karthi is just as good here in the action sequences as he was in the earlier romantic scenes even though he’s now in a different film and seems to be playing a changed character.

It seems as if Susindran couldn’t decide if he wanted to make an action thriller or a romance. Rather than combining the two together he splits the film into two distinct stories with very different approaches which means that neither is particularly satisfying. I think that the romance in the first half works better than the action of the second as the interactions between Jeeva, Priya, their families and friends are well depicted. Of course that could also just be because I prefer a romantic storyline, but while the action starts off well it just becomes too fanciful to maintain the suspense. It’s hard to believe that by himself Jeeva could take on a gang of youths who’ve managed to eliminate some of the top rowdy’s in Chennai, and for me his final actions don’t fit at all with the characterisation developed earlier in the film.

Despite the issues I have with the story, there are a number of good points to the film and a number of very well shot scenes. For a change there isn’t an irritating comedy track, and the performances by all the actors are consistently good. Jayaprakash as Jeeva’s father Pragasam does appear to be an older version of his son with similar views and approach to life, and the relationship between the two is well portrayed. There are only 3 songs in the film but the music by Yuvan Shankar Raja is beautiful. More would have been good, although the background score is also excellent.

The idea of trying to make a film around the crime statistics from any major city in the world to-day is a good one but the depiction of the characters and the development of their part of the plot doesn’t live up to the promise of the initial opening scenes. Susindran tries a different approach and while his picturisation of the seedier side of Chennai falters, Madhi’s cinematography does reveal a more realistic take on the city. Worth a watch at least once for Karthi and Kajal, and skip the second half if you want to avoid the violence and unlikely storyline. 3 ½ stars

Temple says: Considering all the rape and murder going on, I found this film surprisingly tedious. I think the problem was Karthi’s character or performance as to me it was more like a succession of performances than a rounded character with depth or variation. Jeeva started out a smart mouthed manipulator and charmer who could talk his way in and out of trouble, before suddenly becoming a total innocent who believed everything he was told and had none of the insight he had earlier demonstrated, then he was a breathless and gushing fan of an admitted killer, the next incarnation was a serious young man who had learned the value of money through just a small taste of having to shop and pay bills, and finally he became the invincible and implacable hero. None of these segments felt connected with the others, and I was completely disengaged from his character after a while. I’m not sure whether it was the performance or the writing that missed the mark – I think both, although I have liked Karthi in other films. The first half is all about the romance and Kajal is quite effective as the likeable but kind of stupid heroine. Priya is indecisive and eager to please so never knows or voices what she really wants – a flaw Jeeva points out several times as he also tells her what to do.  Kajal and Karthi have nice chemistry, but as Priya disappears for the second portion of the film, there is no point getting too attached to the lovey-dovey pair.

The crime and revenge plot is also patchy. The gang is initially shown as a bunch of drug fuelled opportunists under the leadership of a psycho.  Somehow despite their poor impulse control they manage to cobble together and execute a ridiculously complex plan to eliminate Jeeva’s dad.  The finale is too long, too improbable and as I couldn’t relate to Jeeva it lacked emotional intensity.

The performances are mostly fine, it’s a technically well made film, but it’s a bit hollow for me. 2 stars.