Sahasra  is a B.Comm student, but her passion is singing. She is a smart, confident girl who is an unwanted addition to her step-mother’s household and she tries to keep her head down.  Her friends are an unexceptional bunch of students and singers, and she is an ordinary girl. So why are people trying to kill her?

Anukokunda Oka Roju translates as Suddenly One Day and the answer lies in a missing day in Sahasra’s life. The action took some time to get going, but I always felt there was some underlying sense I just hadn’t uncovered yet. The direction by Chandrasekhar Yeleti is pacy but allows time for the story to unfold in a way that felt realistic enough and the city setting gives a slightly chaotic edge to the action. It didn’t feel like a join the dots story and there were things that seemed irrelevant initially but took on more significance later. The strength of the characterisations helped keep the suspense set to high despite some overly contrived incidents. Once the motivation behind the attacks on Sahasra was revealed I struggled to completely believe in it, but I was so interested in the characters that I eventually found the ending quite satisfying.

Charmme delivers a great performance as a girl in trouble and out of her depth. Sahasra is a talented singer in a studio chorus with ambitions of singing solos for the great film composers. Charmme shows the spark of confidence and joy that Sahasra feels when she is involved in her music, and how that evaporates when she returns home to a less hospitable environment. Her speech and expressions become younger, almost childlike as she seeks to placate her step-mother, but then regains her robust cheekiness when on the phone to her mother. It makes Sahasra’s fear and also her resilience seem real as we see her strength in everyday situations, not just in the struggle to survive. 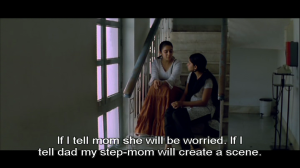 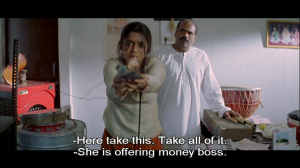 This is my favourite of Charmme’s performances, and if you want to see a modern heroine carry a film other than a rom-com, this is a great place to start. And she sings a song sort of dedicated to Chiranjeevi so clearly she has excellent taste in film heroes!

Rajesh (Shashank) is a student who runs an unofficial taxi service on the side. He spots Sahasra and chases her demanding money for a taxi fare she doesn’t remember. She denies everything but they keep crossing paths. He rescues Sahasra from a gang of big burly men and in turn becomes a target of sorts. Shashank does an OK job, but as in Sye he doesn’t do any more than just OK. He is suited to this role, and the fight scenes are realistically scuffly and non-heroic, but despite being in a couple of highly dramatic sequences he made little impression. 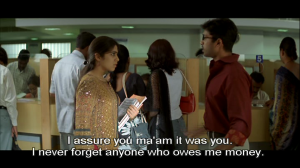 SI Suresh Reddy (Jagapathi Babu) is an odd character. A corrupt and eccentric juice-swilling policeman, he is in the vicinity when Sahasra is attacked. His investigation is motivated by both judicial and personal concerns – unbeknownst to Sahasra, her father was in talks to marry the pair. He is socially awkward and falls for her like a ton of bricks.

Jagapathi Babu is brilliant at showing glimpses of the awkward guy with a crush as well as the confident bully. His eccentricities seem to stem more from boredom in his career and his life, and when he means business, he is convincing. He takes on the investigation and at first is totally unwelcome in Sahasra’s life and her friends resist him. But he gets results and as he unravels the events, he realises that other mysterious deaths may be related and Sahasra is in more trouble than she knows. His character builds over the course of the film, and I found myself first dismissing him as a corrupt nutter, but then anxiously looking for his face in the crowd as things looked grim for Sahasra.

Sahasra’s friend Shwetha (Pooja Bharti) took her to a party and Sahasra’s drink was spiked. This is the reason for the lost time, and lost memories. The drugs were let go by Suresh Reddy when he took a bribe from the dealer so his involvement takes on another dimension. The dialogue (by Ganga Raju Gunnam) was excellent, often amusing and very illuminating in terms of character insights. The girls are such different characters and I liked that they were shown as disapproving but not bitchy. There are a couple of dialogue exchanges where the girls discuss sex and it is refreshing to see friends who can tell each other they think the other is an idiot but without rancour.

The safe sex message is loud and clear and despite being linked to an unwanted pregnancy, I didn’t feel that the girl was being demonised, and she certainly wasn’t made to suffer or repent. In fact, the good girl was the one to walk out of the hospital and nearly be killed. It was an interesting detour and suited the low key modern urban setting and the cast of 20-somethings. Sahasra is a typically good girl heroine, but her friends are diverse (although very much in the background) and that makes her more relatable and real.

It was this level of detail in the characterisations that made the film so engaging for me. These people had lives I could identify with to an extent, and their motivations were believable. Sahasra’s home life was complicated by her father’s remarriage, but her step mother wasn’t a crazy evil stereotype, just a bit of a bitch. Shwetha was partially responsible for her friend’s predicament because she didn’t speak up at first, but she was still a good friend when Sahasra needed support. Rajesh had debts and aspirations, but didn’t let his own plans blind him to a person in need. Suresh could have used his authority to pressure Sahasra but he backed off and when she came to him, he helped and did it in as sensitive a manner as he could. There is a scene at the end where Suresh just says what he needs to say to the guy who he thinks might get his girl and it’s touching but realistic.

There is a comedy sideplot, but mercifully it is carried mostly by the very likeable Harsha Vardhan as a hapless school teacher and neighbour, and to an extent by Rajesh in his taxi. The comedic incidents do all in some way feed back into the main story, and involve relevant characters. Harsha Vardhan wins my special gold star for most excellent insults delivered in delightfully plummy English.

And there was a fight in a music shop which I enjoyed a lot as it was funny and still menacing – and Charmme acquitted herself pretty well before her rescuer turned up.

The M.M.Keeravani soundtrack is effective and all the songs have their place either illustrating characters or incidents, so there were no breaks in the dramatic tension just because people burst into song. The cinematography adds to the mood, using changing angles and distances to show the pursuit, but balancing that with character focussed shots that reveal people’s inner thoughts and hopes.

It’s a really enjoyable thriller and I highly recommend it. I have to make a minor deduction for an over the top although rarely seen bad guy, and his motivation. But the conclusion for the three main characters is satisfying and a little less predictable than it might have been. 4 stars!