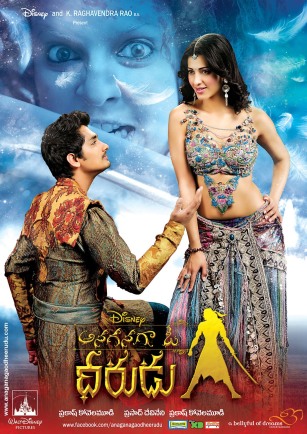 There has been so much hype about this film; the Disney involvement, the special effects, the budget. Warning: there are lots of spoilers ahead, but this IS a Disney film so you should know what to expect.

The story is simple – an evil queen lays waste to an idyllic kingdom and the only hope for survival lies in the hands of a child mystic and her blind bodyguard.

The film opens with very Disney style animated credits, and then we immediately see a warrior pursued through a spooky forest before being made into a sort of zombie, his mind controlled by Irendri the evil queen with the Medusa hair. So there was already a question of whether this was aimed at being a kids film or a high fantasy epic. And that is the problem – this film doesn’t know what it is and as a result, is a bit unsatisfying in either genre.

The screenplay relies heavily on flashbacks. There’s a flashback about Moksha (the mystic child played by Baby Harshita). Shortly after we meet Yodha (Sid) he pauses for a flashback about his lost love (Priya, played by Shruti Haasan). Then when he and Moksha leave on their journey, Yodha stops for a really long flashback that explains his history, more about his lost love and how he became blind. Then towards the end of the film we get more long flashbacks explaining Irendri. It halted the momentum of the story and these could have been condensed or the information conveyed by other means.

While on the subject of how Yodha was blinded. If your eyes are poked out with a metallic pointy thing, they do not grow back changing their iris colour to blue. They would be white sightless orbs covered in scar tissue, or all the fluid drains out and they shrivel up like raisins. It does have to be said that Sid was good at playing blind but the contact lenses were a bit distracting, as were the constant close ups of his ears.

Some scenes were shot on location and the natural light was particularly unforgiving on the set constructions at the beach camp. Things looked too new and perfect; there was no wear and tear or mends on the snail shaped structures, the lighting was too obvious and modern. It sometimes looked cheap and fake, and more suitable to a kids tv show than a high fantasy epic. The wonky papier mache buildings at the village looked like they should be inhabited by Munchkins. When scenes shifted to interiors, things worked much better as the diffuse lighting was kinder to all the painted polystyrene and fibreglass props. The peacock theme, started as a beautiful costume worn by Shruti was well worked into the colour and decor of her room. Irendri’s palace fortress looked great – there was a commitment to the snake theme and it looked substantial and daunting. The scenes in the spooky forest with the bird demons were quite effective and  helped build some tension. Moksha’s special gift was shown by her ability to create magical butterflies. Oh so many butterflies. We were grateful she wasn’t obsessed with My Little Pony or unicorns.

The costumes would have looked great as sketches but some of them didn’t work as something an actor had to be able to move freely in. Poor Lakshmi Manchu must have developed thighs of steel as she had to power up the steps to Irendri’s throne dragging metres of fabric that we could see was catching or getting stuck.  Some of her outfits were just insane, particularly the shoulder details which were of epic proportions.

Sid’s outfits seemed to be a cross between leftovers from Mu Lan, a bit of D’Artagnan and a dash of Joseph’s Amazing Technicolour Dreamcoat. And while some costumes were really beautiful, some of the outfits Sid and Shruti had to wear were just plain fugly. There were too many fabrics cobbled together, too many ruffles and frills, and again the feeling the costume was wearing them.

The final confrontation between good and evil occurs during a lunar eclipse and culminates in a fight between Yodha and Irendri – who morphs into a giant medusa squid. Well actually she seems to be multiple snakes joined together but the effect is squid like. Sid performs some amazing stunts and acrobatics, the lighting is moody and effective, and then we have to wait for ages as the CGI team show off their monster before the fight starts up again. It was strangely boring despite Sid clearly giving it his all. We both thought of the scene in Magadheera where Bhairava has to kill 100 men – We knew already how his character would die, we knew it was riddled with special effects (not all of them great) and we knew it was just plain impossible and yet that was edge of the seat stuff because of the editing, the music and the implacable pace. In contrast, this was unexpectedly pedestrian and didn’t get any emotional response from us. We did have ample time to notice that the medusa squid was frequently shot from what can only described as an upskirting angle (albeit there was no skirt).

So what were the successes?

Good performances by a charismatic cast (although we don’t really get all the fuss about Baby Harshita) who did all they could with a script that was lacking. Sid was charming and easily handled the comedy skits, the romance and the action sequences. Lakshmi Manchu made Irendri evil and despicable – a proper cartoon villain and a near relative of the evil queen in Snow White. Shruti was decorative and enigmatic, and had great chemistry with Sid.

The hair snake. Irendri would occasionally take a (fully clothed) bath in blood or venom or something and consult an entity called Sarpini who happened to manifest as a snake made of Irendri’s hair. This magical snake also created its own tiara and other accessories as it spouted prophecies of doom. It worked well as a piece of animation and suited the medusa theme. Irendri’s designers really used the snake imagery well, and added lots of serpentine detail to her lair and her costumes. 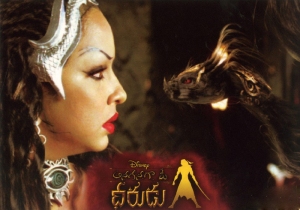 Ali in drag. Who knew? Well he did a very good Carmen Miranda fruit bowl hat, and fetching nipple enhancing propellers that picked up speed when he was near Sid (you can catch a glimpse in the theatrical trailer). We liked his mermaid ensemble a lot.

The soundtrack worked well as a soundtrack, and the few songs are not really outstanding. Yodha has his own heroic theme, and that generally works although the 80s power guitar version was a bit incongruous.

Fabric. This film is one for the textile fanciers. And there is lots of sparkle. 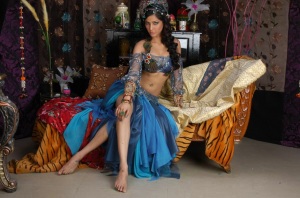 With a lot more editing of the screenplay, a little restructuring of some scenes, and a decision as to whether they are aiming at kids or adults, this could be great. As it is, it’s a bit too dark to be a kids film, not substantial enough to be a grown up epic and just ends up being a bit wishy washy. The audience jeered at the songs, laughed at some of the dialogues, and as always Brahmi got the biggest cheer.