A straightforward romantic comedy, Ready is lifted above the mediocre by the charming screen presence of Ram and Genelia in an excellent pairing

Ram plays Chandu, the well-loved son of a large family.  He is an engineering student with the squishy heart of a true romantic. He routinely assists his friends and family in ‘liberating’ themselves from unwanted marriage plans. He is the prankster— quick thinking and smooth talking. Life has been a series of games to him, until he meets the girl of his dreams and the stakes get more serious.

Genelia is Pooja – recently returned from the USA and desperate to escape an unwanted arranged wedding. She is an educated and independent girl who still wants to fulfil her late parents’ wishes but on her own terms. 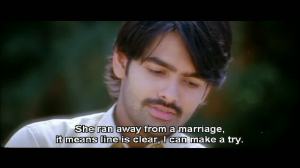 So when Ram goes to kidnap yet another bride for freedom and elopement, it is no surprise at all when he bundles the wrong woman (Genelia) into the van and makes a run for it.

Pooja’s feud riven Rayalaseema family of machete-wielding Sumo-driving men are not happy to see her go: owning her equals owning the balance of power and the cash in the clan.  She is pursued by both sides of this divided family each in separate convoys with their own potential groom. Chandu’s family have kicked him out for aiding in his sisters elopement  so he has nowhere to go.  Along with his closest friends, Chandu flees with Pooja ,who was initially quite happy about her abduction, but she begins to have second thoughts when she realises Chandu has no escape plan and her relatives are very serious about getting her back.  The youngsters run and hide and run some more as they try to find a refuge. After an excellent Peter Hein choreographed fight with chief henchman Narasimha (Supreet), they flee again and make it back to their friends. 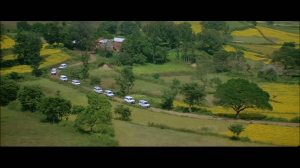 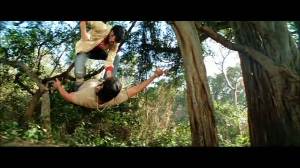 For a number of fairly flimsy reasons Chandu persuades Pooja to pose as an orphan sent from the local  guru’s ashram, to stay with his family. This allows him the chance to keep her safe, win her over and also to negotiate his way back into the family home. Chandu fell head over heels for Pooja the instant he saw her face – but she feels that this is part of his fickle nature and it takes her at least 2 songs to succumb.

Their relationship develops and while the family don’t know the truth about Pooja they see the burgeoning love and approve heartily, understanding what she is to their prodigal son. But nothing was ever going to run that smoothly and one of Pooja’s uncles manages to track her down and take her back. 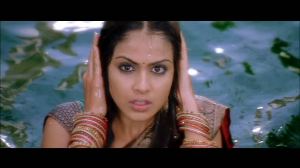 So Chandu enlists the help of his family, a reluctant Brahmi who is coerced into employing Chandu, the other bridegrooms and basically every man who has so far appeared in the film to try to get Pooja back. Chandu will only marry her in front of her family, with their blessings. Apparently eloping is what other people do. What a real hero does is: invest in a remote controlled toy car, dress up as a superhero (Krrish and Spiderman make appearances), do some creative accounting, invent brides for the other competing grooms, persuade his own family to impersonate the family of invented brides, coerce the factionalists into new haircuts, sharp suits and being nice to their wives, become the obvious choice for marrying the now unwanted Pooja, and there you have it. A simple plan— until it all falls apart.

There are no surprises in the actual storyline. It’s a typical boy meets girl, girl isn’t interested, boy goes after girl, boy beats up the opposition, boy finally gets the girl and they live happily ever after.  What distinguishes Ready from many other films in this vein is deft use of humour and the likeable stars. There are some  quirky touches in the fight scenes and, although he looks like a stubbly twelve year old at times, Ram is actually believable in many of the more physical scenes as he has a certain acrobatic flair. The dancing and fights have been choreographed to suit him, and he really throws himself into it. Genelia is her usual bubbly self and here she has a leading man who has enough energy to match her. They do make an attractive pair, and there is enough chemistry to make their romance seem genuine and appealing.

The supporting cast features all the usual suspects. Master Bharath is a delight as the very dramatic tyrant-in-the-making Chitti. He has excellent comic timing, an impressive evil laugh and a confidence in his performance that meant he could hold his own amongst the established adult character actors (Kota Srinivasan Rao, Jayaprakash Reddy, Nassar, Shafi, Saranya, Supreet to name a few). 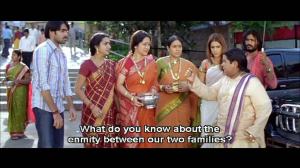 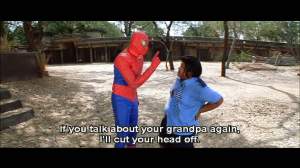 While there is plenty of comedy running throughout the main storyline, there are a number of  comedy subplots which are shared between Sunil, Brahmi, Santosh and MS Narayana. Sunil is fun as the dance-obsessed fool Janaki and has some excellent theatrical moments. Brahmi is involved in much of the second half drama which requires him to do little more than look bewildered or angry most of the time.

Santosh plays a hapless tourist kidnapped by the uncles along the way as the only person who can identify Chandu and makes the most of his small but amusing role.  MS Narayana has the least amusing and smallest subplot but also suffers from someone’s idea of special effects.

The songs are well integrated into the film and are enjoyable without being particularly memorable. Ram and Genelia seem to thoroughly enjoy dancing together and this helps lift the soundtrack and enhances the affinity between them.

Heather says: Ready is a little gem of a film.  It has almost everything you could possibly want in an entertaining Masala movie.  This was the first of Ram’s films I watched and it did make me go out and buy more of his movies!  I think that the lead pair here are very convincing as a couple.  Ram and Genelia seem to enjoy themselves immensely in the film,  adding to the feel-good atmosphere.  The story is fairly standard, but there is plenty of comedy, and the scene with Chandu impersonating Krrish is one of the funniest I have sen in Telugu cinema.  The interactions between all the various characters seem well written (at least according to my subtitles), and the comparisons between Chandu’s loving and family, and Pooja’s feuding and unhappy family are well drawn.  The only downside for me is the songs, which I just didn’t find very catchy.  I thought the choreography was well suited to both Ram and Genelia, but again, it wasn’t outstanding.  The exception is the engagement song above, which almost makes up for the others!  But this film is all about the comedy and the interaction between the leads, and is a winner on those. 4 1/2 stars from me.

Temple says: I watched this again recently and it says much for Ram and Genelia that I stuck with it a second time. Honestly, I was bored whenever they were not on screen for any protracted period. That’s not a criticism of the support cast who are all fine, more a symptom of a very stock narrative that doesn’t hold up to a repeated viewing. I was not a fan of Genelia when I first saw her in Hindi films, but I really like her in her Southern films. I think it has something to do with energy levels. Paired with a laid back star, she can seem over-the-top but with someone like Ram who balances her energy she is really appealing. They have a lovely on-screen chemistry and that’s what makes Ready an enjoyable film. Seenu Vytla has ensured that the choreography for the songs and fights suits Ram in particular and these sequences are beautifully filmed. The multiple comedy tracks were frankly annoying. I enjoyed Sunil and Brahmanandam’s roles but the rest was quite unnecessary in an already crowded cast of thousands. Overall while this is a pleasant enough film, it isn’t really my cup of tea. 3 stars from me – one each for Ram, Genelia, and the fun song picturisations.