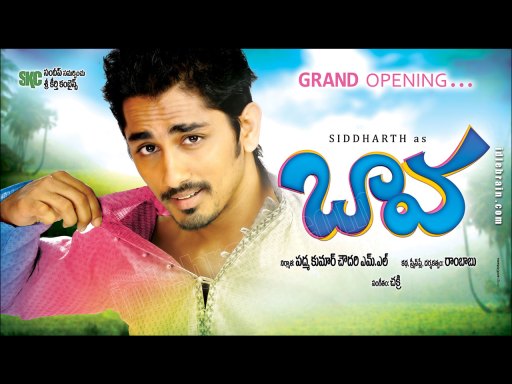 What a huge weekend! Diwali festivals happening all over town, Spring Racing is underway and to top it off we had another Adventure Without Subtitles. Melbourne is a great place to live at times like this!

So off to Baava at the newly christened India Talkies cinema.

We think this is a film that will improve greatly with access to subtitles, however there were many things to enjoy regardless.

The first half opens and sets up the lead characters- Siddharth as Veera and Praneetha as Varalakshmi. It becomes clear that Veerababu is a hapless lad, causing mayhem in his wake. We wondered if perhaps he was the idiot in search of the right village as he seemed to have the knack for doing nothing right. The village residents tried to banish him, his parents despaired of him. Varalakshmi on the other hand is the golden child of a well-to-do family, and is a ball of energy and fun. 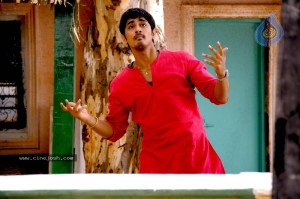 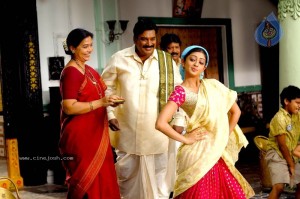 That took a few minutes to establish, and yet it is basically the whole story of the first half. The dialogues were clearly hilarious, but there was no character development or  drama so it seemed very slow to us non-Telugu speakers.  This is where we think the subtitles will make the first half  more entertaining.

But the songs are awesome on screen. The picturisation, the choreography and the music are so well meshed and make sense within the plot. We read Siddharth’s complaints on Twitter about the dances, but he looks like he is having a ball. Perhaps that was just some great acting, but we had a ball too. And really, Sid rocked the half sari and did a very creditable snake dance.

So back to the story. There is a long and (to us) confusing subplot about a family feud and the repercussions at the local temple. Varalakshmi realises that Veerababu is the boy who fell in love with her when they were schoolchildren, and falls in love with him too.

Meanwhile her family are planning on marrying her off to the very tall and very creepy Ramana, played by Vijay Samrat in a really strong performance that doesn’t hold back on the sleaze. Drama is building – Veerababu and Varalakshmi marry secretly. She returns to her home until the time is right. After a nasty confrontation with Varalakshmi’s family (the feud subplot again – it turns out she is his cousin) Veera’s father dies, and Veera goes to reclaim his bride and assert his rights. It was all getting really interesting. So Ramana who by now knows she is secretly married kidnaps Varalakshmi and there is only one way to settle this.

The ending was just silly, and not at all dramatic. We don’t want to tell all, but will give you a hint – they should have had Phil Liggett doing the commentary.

We loved, really loved, the songs on the big screen. The cinematography is just stunning and makes the most of every scene. The lighting and colours were just perfect – things looked sun bleached and warm, with beautifully intense hues to accent the scenes. The production design overall was a real plus.

Praneetha was very good as the sparky Varalakshmi. Her entrance (to Ring Ringa from Arya 2) was just fantastic and her dancing was so much fun to watch we just wanted to join in! Siddharth was full of energy, sometimes maybe too much, but gave it everything. His scenes with his friends and Varalakshmi showcased his cheeky smile and flirtatious eyes and the emotional scenes with his family let him use a bit more of his dramatic range. Brahmi and Ali did their thing and got lots of laughs. We did like the fact that we have to see the bald spot to verify that it really truly is Brahmi.  And the guys who played… well the guys in the village who were Veera’s friends were lots of fun. Extra special bonus points for having Chiru appear on screen during a scene set in a cinema!

We have the feeling that the film would be much  improved with a better plot structure and a few edits (as well as a much better climax scene) but have to reserve judgement til the DVD is available.