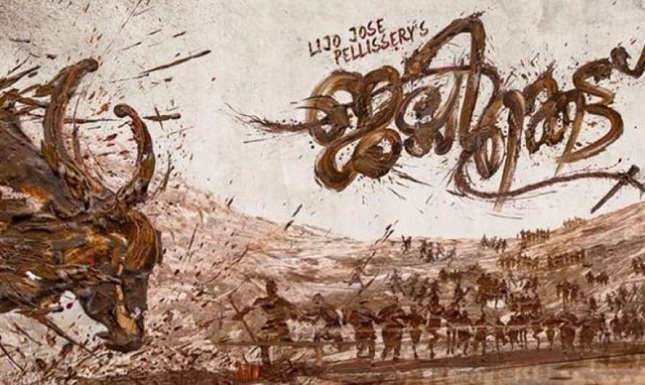 Jallikattu starts with a chorus of household noises that gradually give way to the birdcalls and insect sounds of the forest. But the peace is quickly disrupted by the chaotic cacophony of groups of men chasing after an escaped buffalo. The pace is frenetic as the buffalo damages crops, buildings and people, old rivalries between enemies are renewed, and the entire male population of the village descend into a kind of primitive madness as they chase after the beast. It’s a potent mix of petty rivalries, domestic and social clashes, underscored by masculinity at its most base, all combining to make Jallikattu a feast for the senses and above all, a wild ride of a film.

After the quick cuts of the opening section, the film introduces the various characters in the village. Varkey (Chemban Vinod Jose) is the butcher who dispenses chunks of fresh meat to a predominately male clientele alongside his helpers, chief of which is Antony (Antony Varghese). Also notable in the early scenes are a police officer (Tinu Pappachan) who is seen abusing his wife (Pravitha Vijayan) although she seems able to fight back quite effectively, and the rich but unpopular Kuriachan (Jaffer Iddukki). As the only supplier, Varkey is asked to provide the meat for Kuriachan’s daughter’s engagement party but when the time comes to slaughter the buffalo, Antony slips up and the animal escapes, starting a madcap chase to capture the beast. Initially it’s just Antony and Varkey running through the fields, but the situation quickly escalates as the buffalo damages crops and the local church before setting a haystack on fire and destroying a couple of small businesses in the village. It’s impressive work for one buffalo and the trail of destruction just gets bigger and bigger as the chase continues.

To try and catch the animal, the villagers first rally together, but the arrival of a group from a neighbouring village sparks the first signs of serious conflict. Adding to the heady mix of testosterone is local hunter Kuttachan (Sabumon Abdusamad), who has recently been released from jail and is keen to extract revenge on the man who put him there – Antony. Kuttachan arrives to his own cheerleading soundtrack, provided by the villagers, and along with his aggressive attitude it seems likely that more blood will be spilled before the buffalo is captured.

As more and more men gather and take up torches and crudely carved wooden spears to hunt the buffalo, the night forest comes alive with streams of light and the sounds of the hunt. The buffalo is heard more than seen – a shadow in the night, occasionally a tossed body or the flash of horns, but mostly there is only the rustle of grass and sound of hooves. In the brief moments when the animal is actually visible, the animatronic buffalo is realistic and convincing to the point where I was happy there was a disclaimer at the start of the film given the level of escalating violence doesn’t bode a happy end for the buffalo. It’s great work from the whole team and the combination of art director Gokul Das and cinematographer Gireesh Gangadharan ensure the buffalo is a central presence despite the mainly fleeting glances.

The film is more about the frenzy of the chase and the sounds and images of men on the hunt rather than a story involving specific characters. The stories around Kuttachan, Varkey and Antony are for the most part short vignettes and the main focus is on the rising blood frenzy of the crowd. Even when there is a brief interlude after the buffalo falls into a well, some of the men are seen killing and cooking a chicken, and the threat of violence is never far away as the different groups clash. With such a male dominated cast there is little scope for any female characters, and only Varkey’s daughter Sophie (Santhy Balachandran) has any real role to play. Her interaction with Anthony requires a screen warning about violence towards women, but despite the character’s attempts to appear manipulative, I felt that she was more resigned to her fate in a village full of such machismo men. The rest of the women seem to be either secretly laughing at the men (given the mostly inept and ham-fisted attempts to catch the buffalo), or just indifferent to their antics. In a sort of ‘watching the children play’ attitude, the women gossip and cook tapioca while mostly ignoring the warnings to hide inside their houses to escape the buffalo.

Probably the most impressive part of the film is the soundtrack – both the music and the ambient sounds are brilliantly integrated into the action and serve to heighten the tension of the chase. Prashant Pillai’s soundtrack underscores the wild excitement of the hunt and the vocal chants sound almost like anthems to the gods of the forest. Along with the stunning visuals, either soaring high above the forest or deep inside the chaotic action, the sounds are vital in conveying the blood-lust and violence simmering in the crowd. 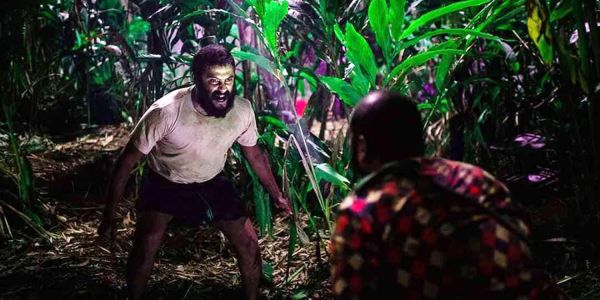 The end is appropriately cataclysmic and while the symbolism may be a tad heavy-handed at times, it’s the overall spectacle that impresses. However, this isn’t a film for everyone. Violence simmers at every turn, frequently boiling over into blood-lust and naked aggression, while the themes are belligerently masculine and at times even misogynistic. But as in Lijo Jose Pellissery’s previous film Ee. Ma. Yau., there is still humour even in the darkest moments of the film. Indeed, this may perhaps be the point – that for all their aggression, the men’s behaviour is so ridiculous that it becomes comical when seen from outside the maelstrom of the hunt itself.

The frenetic pace of the film and incessant beat of the soundtrack sweep you along with the action and leave little room for anything other than wonder at Lijo Jose Pellissery’s vision. Toxic masculinity aside, the film is a departure from standard Indian cinema and as such deserves to be seen by a wider audience. Different and challenging, Jallikattu is well worth watching on the big screen if you can.