E.V.V Satyanarayana’s Alluda Majaka could have been an excellent film. There’s peak mullet Chiranjeevi, Ramya Krishna and Rambha so you know the dancing is taken care of, a big budget and adventurous designers. But the story by Posani Krishna Murali is uneven and the comedy interludes are sexist and sleazy even by 90s mass standards. However, look for gold and avert your eyes from the dirt and there are some rewards for your time.

The film opens with Seetharam (Chiranjeevi) being taken to his village in police custody so he can attend a religious festival. Then he’s off straight into a big chase and escape from the police, and it is vintage Chiru. But oh those horse stunts churn my stomach, and the infamous horse sliding under a truck stunt doubly so, even with the hopefully fake horse in one shot. But there is a glass bus. Who knew?

Then Seetharam forcibly marries Pappi (Ramya Krishnan) who is at her wedding ready to get hitched to someone else. And then he is back off to jail again. A lawyer (Giribabu) arrives and promptly shoots Seetharam and then himself in the arm, setting his client up for that crime too. The laywer needs to know why Seetharam has ruined a young girl’s life by marrying her against her will and right before he went back to jail. This triggers a long flashback. 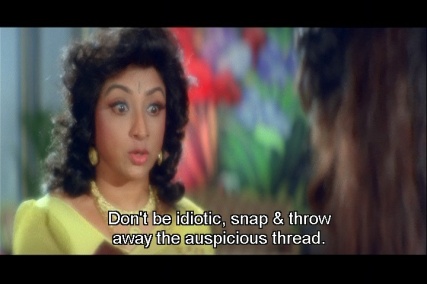 Seetharam’s father was the village president and seemed to be benevolent and practical, much loved by the people. Pappi (Ramya) and Bobby (Rambha) arrive in the village to stay with their mother Vasundhara (Lakshmi) and uncle. They stir up all kinds of trouble and see themselves as above the law and certainly above the people. That does not sit well with Seetharam. Another rogue joins the fray when Peddaiah (Kota Srinivasa Rao) arrives with the plan to get one of the rich girls married to his NRI son Chinna (played by the may as well have been non-existent for all the impression he made Siva). Chinna falls for Seetharam’s dialogueless sister Malliswari (Ooha) and they are engaged. Vasundhara wants the groom for Pappi, Seetharam is delighted his sister will be married, and Peddaiah is determined to find a bride based on dowry and gain for himself. When Chinna goes back to the US for a few months, Vasundhara and Peddaiah pull out all the stops to break up the engagement. It is on for young and old and the unmarried young women are the pawns in the game. By the time we stagger to the conclusion, it’s a straight up battle involving an explosives factory and a jetty and if that doesn’t scream Masala Death Trap I don’t know what does. 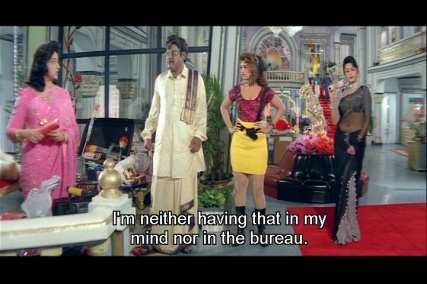 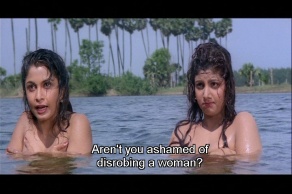 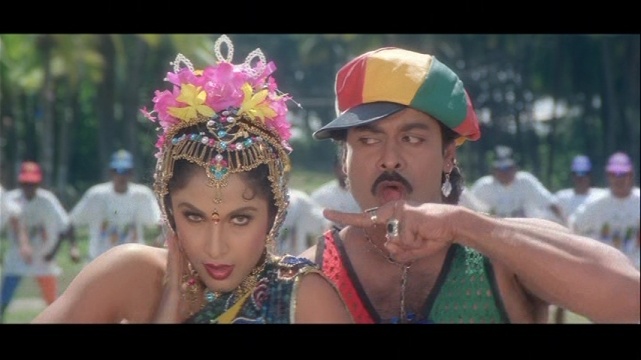 I am uncomfortable with the value this film places on women being pure and subservient, but the strong women in the story are so horrible I can’t stand them either. It would have been more interesting if they were less insane and more simply independent. Lakshmi as Vasundhara is the true villain here. She is smart, manipulative, and greedy. But what is her greatest crime? Not wanting to live with her husband – the lawyer Sivaramakrishna who is defending Seetharam. Pappi and Bobby are brats and completely lack common sense or empathy. But. Do they deserve to be humiliated by having their bathing suits ripped off them mid swim? Does Pappi deserve to be married against her will to a man who has been sentenced to death? Does Bobby deserve to be humiliated by the accusation that she’d had accidental sex with her brother-in-law?

Does anyone deserve the outfits they wear in the songs? 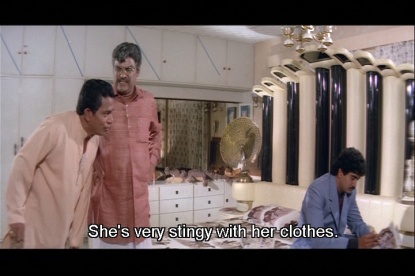 Much of the comedy is sleazy and gross. Apart from trying to get Ramya and Rambha in compromising positions to teach them a lesson, one track includes Brahmi in drag and a long build up to a tacky rape joke. Then there’s the farcical nuptial night with power outage that leaves the three women uncertain if they’re the one who had relations with Seetharam. And that’s a whole other line of enquiry I prefer not to pursue. I read a review that mentioned Rambha had once said that Chiranjeevi had made the director drop some of the really vulgar scenes planned. My reaction was “Yay for Chiru!” and then a mind boggling moment as I pondered what had been too much considering what had been left in.

Things I did like include that nobody thought Pappi should have to live in a forced marriage (although killing the groom is not cool). Also when Malliswari fell pregnant to her absent fiancé most people, with one notable exception, nobody tried to punish her (except the baddies but that was not on moral grounds). And Vasundhara was a terrible person but she was well written as a villain and had a little bit more going on than most of the men on Team Bad. I quite liked the use of a rainbow slinky as gangster accessory too but that might be a sign I was running out of patience with everything else. And of course, there’s the reason I watched this in the first place. The decor. No! 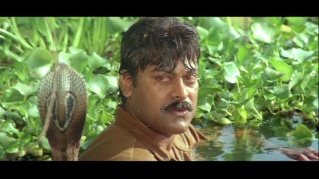 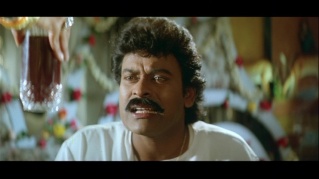 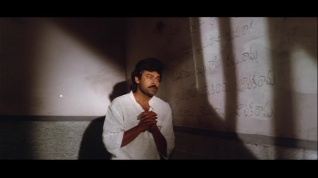 Thankfully Chiranjeevi is in great form despite the lamentable material. He fights, he speechifies, he emotes so vigorously even his hair is furious, he defies laws of physics and gravity, and he dances like there’s no tomorrow. And he does it all so well. The fight choreo is complex and includes loads of acrobatics which Chiru nails. And he gets to drive lots of different forms of transport which I feel Chiranjeevi enjoyed. He looks quite content trundling around on his tractor, then so devil may care on a jet ski. 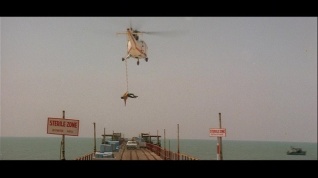 Although the stunt dummies lack his panache. As usual Chiru dances like he’s having the time of his life strutting his stuff in some truly eye-searing looks. In an unfortunate plot diversion, Chiru also plays the Mega rich Mr Toyota. Rich, weird, and foreign, he’s a comedy uncle on heat. I’m not sure how his disguise as Mr Toyota was in any way convincing and I am not at all persuaded the film needed him despite the additional scope it gave to the costume team. It is such a shame this film is an over long and undigestable turkey because there is so much peak Megastar stuff.