Separated lovers and a school reunion some 20 years later are the key elements of C. Prem Kumar’s beautiful and spell-binding romance ’96. The title refers to the year Ram (Vijay Sethupathi) and Janu (Trisha Krishnan) graduated from their school in Tanjore and there is a lot of nostalgia here, even for someone like me who left school many years before 1996 and in a different country. For anyone who has ever been to a school reunion, much of this will ring true, and it’s the realism throughout the film that drives investment in the characters and their situations. Everyone here is fantastic and the story completely captivating, making this the best romance film I’ve seen so far this year.

The film opens with a song introducing K. Ramachandran (aka Ram), a wild-life and travel photographer who can see beauty and interest everywhere he looks. We see birds and butterflies look simply amazing through his eyes, and even an isolated group of plants in a sand dune become charmingly scenic. What’s interesting here is that Ram is always alone. When shown eating in a restaurant, he’s the only one there, and while taking photos on the streets, he rarely interacts with the people around him. Even when he’s taking a picture of an actual person, the camera seems to create a barrier between him and his subject. The song ends with Ram on a deserted beach and as the camera pulls away, we can see just how isolated and alone he is, although there is nothing to suggest that this is not exactly how he prefers to be. 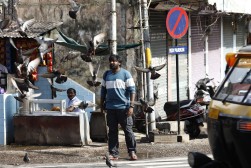 Ram also seems to teach photography and, on the way back from one of his teaching sessions, a detour takes him through his hometown of Tanjore. Despite initially instructing his student not to stop in case he has to talk to anyone, Ram ends up outside his old school and after reminiscing with the security guard (Janagaraj) heads inside to his old classroom. Prem Kumar doesn’t give us flashback sequences with chattering students to illustrate Ram’s memories of his school days. Instead, and more effectively, the school is empty and silent, but Ram runs his hands along the marked walls, exactly as he would have done every day at the school, and shouts in glee when he spots his name on an achievement board. The visit sparks some nostalgia and after speaking to his old classmate Murali (Bagavathi Perumal), who adds him to the ’96 class Whatsapp group, the two quickly organise a reunion. The reactions of the group when Ram joins their chat are simply perfect and work well to recreate the different dynamics between the old friends. They’re also very funny, and allow us to see a different side of Ram’s personality which up until this point has been very dour and unapproachable. 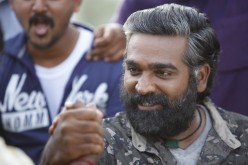 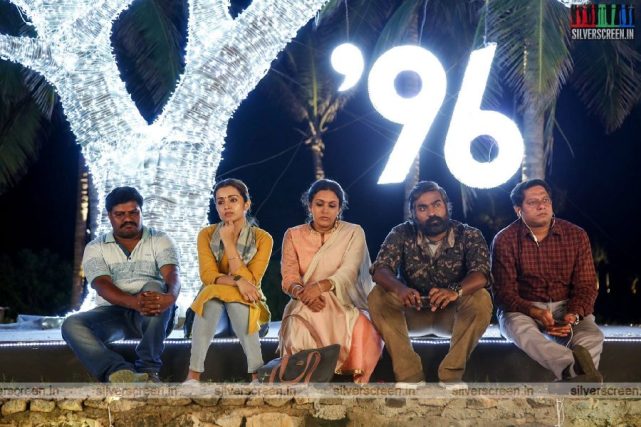 On the day of the reunion, Murali and Ram’s ‘sister’ Subhashini (Devadarshini) are careful not to mention Janu as Ram scans the crowd looking for the girl he loved back in high school. When Janaki Devi aka Janu arrives, she too spends her time scanning the crowd, until she spots Ram, and immediately goes to speak to him, despite the best efforts of Subhashini to keep the two apart. Janu is now married and lives in Singapore with her young daughter, but when she sees Ram, the years fall away and we are swept back into the past.

The flashback sequence shows the romance between Ram and Janu, and it’s a beautifully sweet and innocent love affair. The young Ram (Aadithya Baaskar) is shy to the point of not being able to speak to Janu, and his contortions to avoid touching her even by accident are simply perfect. Young Janu (Gouri G Kishan) is more confident, for example she sings regularly for her class, but she is just as head over heels as Ram. The flashback sequences are a beautiful slice of nostalgia, with songs and film posters from the era, while Prem Kumar has perfectly captured young love with all its silences, confusion, embarrassments and raw emotion. Aadithya Baaskar and Gouri Kishan are superb and play the young lovers perfectly while the support cast including Niyathi Kadambi are also excellent and capture the atmosphere of school life well.

Back in the future, there are more silences and pent up emotion when Ram and Janu meet. Gradually over time they start to talk and the mystery of what happened to Ram, and why he left Janu becomes clear. Along with talking for most of the night, Janu also takes Ram to the barber (Kavithalaya Krishnan), and as he loses his bushy beard and wild hair, Ram seems to lose some of his reserve too and opens up to Janu. 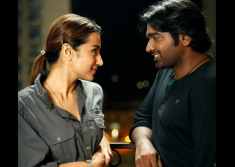 The emotion here is incredibly powerful, and although the film moves slowly it’s the right pace for these two separated lovers as they gradually discover each other again. The same mannerisms are there as in the flashback sequence, and the sheer depth and intensity of the emotion makes for compelling viewing. However, it’s not all awkward silences, potent emotions and age-old frustrations. Prem Kumar has crafted a well-rounded story with comedy perfectly timed to lift the mood just whenever it seems about to become too self-aware or dip into melodrama. It also helps that the two leads, Vijay Sethupathi and Trisha Krishnan have scintillating chemistry and both are at their absolute best throughout the film. I’m always appreciative of Vijay’s versatility and having just seen him power through Chekka Chivantha Vaanam as a cop, and previously as a smart gangster in Vikram Vedha, this is an amazingly abrupt turnaround to a shy, socially awkward loner. He takes the role up to another level entirely and completely brings Ram to life so that we can feel his insecurity and shyness, but also see through all of that to the genuinely sincere person beneath. Trisha too is brilliant here, and her natural reserve works well for Janu while she has an air of sophistication that echoes her character’s usual life in cosmopolitan Singapore. She delivers too in terms of emotion and this really is an outstanding performance from her throughout. I was simply captivated by both Ram and Janu, and like everyone else in the theatre was completely invested in their relationship and longing for some kind of happy ending. Both characters carry equal weight in the film too, which keeps the dynamic more appealing and ensures a better understanding of the characters.

The music for the film is a mix of old and new. Janu only sings songs by S Janaki, and there are timeless Ilaiyaraaja melodies as a result, while the new music from Govind Menon is beautifully melodic and fits seamlessly into the film. The playback singers do an amazing job too, and this is one of the most memorable soundtracks I’ve heard for a while. The subtitles too are well done (I’m not sure who was responsible) and they have taken time to think about the song lyrics and even added in translations of some of the written word.

There really isn’t anything to dislike about ’96. The performances are exemplary and the story is impeccably detailed and perfectly told. There are so many amazingly poignant scenes too – Ram puling out his old school shirt from a suitcase under his bed, the moment when Janu puts her hand onto the gearstick of Ram’s car and his reaction when he goes to change gear and inadvertently touches her hand, the moment when Janu sings for Ram in his apartment, and the final scenes in the airport – just incredible. I loved every single minute and cannot recommend this movie highly enough to anyone who likes their romances to be nostalgic, bittersweet and full of emotion.