Raj B. Shetty is not your typical leading man material. His character Janardhana is 28 years old, thin, shy, and, according to the marriage broker, has two major problems. One: losing his hair and two: working as a lecturer in Kannada. Despite these apparently significant drawbacks, Janardhana is determined to find his perfect bride, although for most of the film he seems to have set his sights unrealistically high. Ondu Motteya Kathe (Story of an Egghead) is an amusing and well-written rom-com that follows Janardhana’s quest to find the woman of his dreams and all the ups and downs associated with his search.

Although it’s the name bestowed upon him by his students at college, Janardhana isn’t really an egghead as he does still have hair, but he is definitely thinning on top. It’s noticeable enough that when he visits a potential bride she rejects him based on his developing baldness, leading to Janardhana’s decision to ditch the broker and find a wife himself. The problem is that although Janardhana himself isn’t top husband material in the looks department, he still wants his wife to be beautiful and that gives him a greatly reduced chance of success. 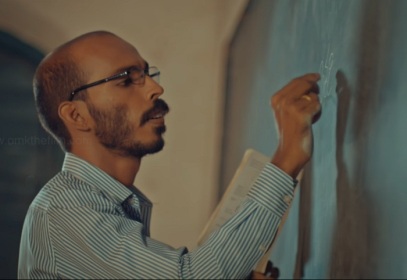 His gaze initially settles on the economics teacher (Amrutha Naik) but despite her friendliness towards him, Janardhana is too shy to approach her himself and enlists the help of the college odd-job-man, Sreenivas (Prakash Thuminad). When the arrival of a new English teacher destroys Janardhana’s chances, and another potential romance turns out badly, Janardhana reconnects with an old friend on Facebook. Sarala (Shailashree Mulki) has recently been ditched by her fiancé, so she too is on the look-out for a potential husband. However, when the two meet, it’s definitely not a case of love at first sight. Sarala thinks Janardhana is ugly and bald, while Janardhana instantly dismisses Sarala as she is (in his words) fat.

Just like Janardhana isn’t really ‘bald’, Sarala isn’t ‘fat’, rather she’s just a little overweight and not Janardhana’s idea of the perfect partner. However, she is very pretty and has a lovely personality which Janardhana can’t see as he’s focused more on her physical shape. Unfortunately for both, although they are resigned to remaining friends, Janardhana’s family believe that they have a love match and immediately start to arrange their wedding.

This a comedy that works partly due to the excellent writing but also because the characters are all relatable and generally sympathetic. Janardhana evokes sympathy with his male pattern baldness but in reality he is a typical nerd, and it’s inevitable that he is ridiculed by his students and further embarrassed when he goes to the college principal to complain. The dialogue is natural and even subtitled is laugh-out-loud funny while the situations are routine day-to-day events that are easy to relate back to personal experiences. Despite his determination to only look for a beautiful bride, Janardhana isn’t arrogant, rather he’s just clueless and totally inept in social situations, while being continually frustrated by his well-meaning but equally awkward family. His mother (Usha Bhandary) is overbearing and overly protective, his father (Vishwanath) keeps the peace by agreeing with everything his wife says and his younger brother (Vineet) spends all his time talking to his girlfriend on the phone to Janardhana’s continual frustration. 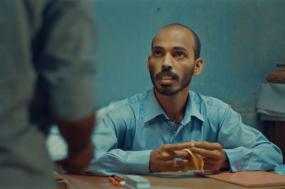 What makes it even better is that as the film progresses, our initial sympathy for Janardhana starts to wane when he rejects Sarala purely on the basis of her looks and is cruel and hurtful into the bargain. It’s a bold move to make the lead character so unattractive as the story develops, and it’s successful because we know the rejection and despair that Janardhana has had to deal with, making his own rejection of Sarala more poignant and thought-proving as a result. Although it is a very funny film there is an undercurrent of sadness too as both Janardhana and Sarala struggle with rejection based purely on their physical appearances.

Another clever touch is the inclusion of Dr Rajkumar as a character in the film through Janardhana’s obsession with the actor and by dialogues and film snippets that crop up throughout, at times inspiring Janardhana to act rather more impetuously than expected.

Raj B. Shetty not only acts in the lead role, but he is also the writer and director of the film; an impressive feat given that it’s his first film and his character doesn’t hog all the limelight as can happen when the director is also the ‘star’. Shailashree Mulki is wonderful as Sarala, while Prakash Thuminad is excellent as an unlikely confidante and relationship advisor, with the rest of the support cast equally impressive and genuinely funny. Midhun Mukundan’s music is put to good use and this is a very funny song with some great clothing choreography and a poignant plea to potential partners.

Ondu Motteya Kathe is a great début and Raj B. Shetty joins the growing number of Kannada directors who are producing films that are just that little bit quirky and different, but still appeal to a large audience. The comedy is good, the romance believable and the characters appealing despite their many flaws. Recommended watching for the clever concept, intelligent writing, excellent dialogue and wonderful performances from the entire cast.