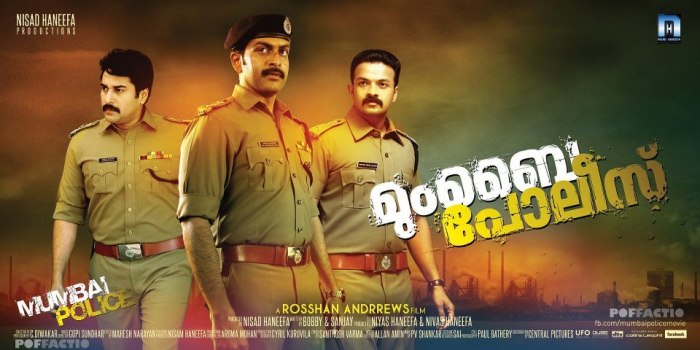 I’m a big fan of police procedural dramas and crime films in general, so naturally this 2013 film from Roshan Andrews made it onto my ‘must-watch’ list. And I’m happy to report that the film more than lived up to expectations, with a genuinely surprising ending and a good build-up of suspense along the way. It’s a difficult film to discuss without revealing crucial plot elements, particularly since those are partly what make this film so good, but I will do my best to discuss the film without getting too spoilerish.

The film starts with an accident that causes ACP Antony Moses (Prithviraj) to lose his memory. This is particularly inconvenient since he had just discovered the name of the criminal who had assassinated his friend ACP Aaryan John Jacob (Jayasurya) at an awards ceremony. Despite not remembering who he is, let alone anything of the crime, Police Commissioner Farhan Ashraf (Rahman) asks him to re-investigate the murder, presumably in an attempt to bring back Antony’s memory. Farhan is another friend and the tenuous link to the title of the film is that the three were collectively known as the Mumbai Police due to previous time spent together working in Mumabai. The friends had a reputation for drinking and carousing, particularly Antony who is now known by his nickname Rascal Moses, a label that seems to colour Antony’s reception by colleagues and suspects alike. 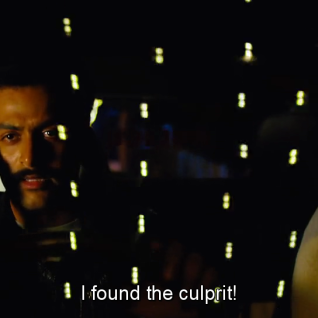 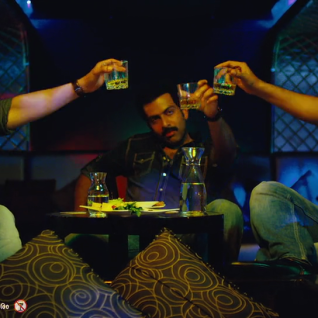 Antony has also been instructed not to let anyone know that he has lost his memory and as a result he makes a number of crucial errors in his first days back on the case. Not all of these relate to the investigation, such as his failure to recognise the Superintendent of Police, but he falters in his interactions with the rest of the investigating team who seem to suspect that something isn’t quite right.

Roshan Andrews uses flashbacks to the original investigation to show that pre- and post-accident Antony are two quite different people. Pre-accident Antony wasn’t a particularly nice character as he wasn’t averse to using force and various other dubious tactics to achieve his desired outcome. Post-accident Antony is quieter, more introspective, and seems to be genuinely interested in finding the actual culprit for his friend’s assassination rather than the first available scapegoat. Prithviraj does a great job of highlighting the differences by completely changing the physical mannerisms of the two Antony’s; changing his walk, stance and mannerisms to accentuate the difference. He’s helped by the physical signs of the accident but there is a distinct personality change too which makes Antony a fascinating character.  I kept waiting for a moment where he would remember his former life and revert back to mean and nasty, however post -accident Antony is quieter and more introspective, and seems constantly bemused as he struggles to come to grips with his memory loss. The reactions of Antony’s colleagues, particularly police constable Rakkhee (Aparna Nair), are used to provide more insight into his character both pre- and post-memory loss while Antony’s complete lack of emotion about his best friend’s death post-accident provides a good contrast to his passion and fire before he lost his memory. The greater objectivity should be a boon but instead seems to make Antony even more unsure of how to proceed and his colleagues find his lack of empathy odd. Antony has no recollection of his friendship with Aaryan and only knows that such a relationship existed because he has been told about it by Farhan. In fact, everything Antony currently knows about anything has come from Farhan and this leaves Antony suspicious and unsure of exactly what to believe – particularly when the evidence starts to point to a cover-up. It’s cleverly written to ensure that the audience really doesn’t know who to believe and who is covering for who, which further adds to the suspense and classic whodunnit flavour of the film.

Antony’s self-discovery proceeds in line with the police investigation and piece-by-piece the story is slowly revealed. There is an interesting side plot that involves tensions between the navy and the police force but overall writers Bobby and Sanjay keep to a fairly simple storyline focusing on the friendship between the three men and the investigation into the murder.

Just as the careful detailing of the investigation helps build tension, the sudden reveal of the killer and the reasons behind the murder make it even more surprising, even though re-watching shows that the clues were there all along. But then that’s just as they should be in any good detective story, and the smoke screen raised by the myriad other discoveries of the investigation is cleverly applied. The only thing that didn’t quite ring true for me was Antony’s reaction, which was just too overdone and rather too ingenuous to be convincing. However it’s a small quibble and the rest of the story more than makes up for Antony’s unrealistic response. 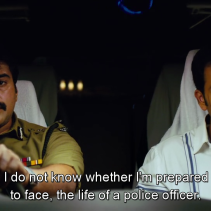 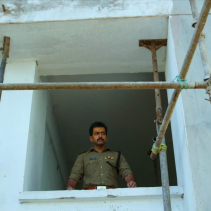 Technically the film looks fantastic and the background score by Gopi Sunder is effective in maintaining the desired atmosphere throughout. The performances are all well nuanced, as would be expected from such seasoned actors, but each has been well cast and fits their role perfectly. Mumbai Police is an engaging thriller which works mainly due to the gradual buildup of tension which flourishes due to Antony’s memory loss, and the ever present threat that the other shoe will drop and either the killer will come after Antony, or he will regain his memory and revert back to his old self.  Does either happen? You will need to watch to find out!

The film is entertaining for all the right reasons as Antony struggles to find both his past and the killer against a background of confusion and loss.  The ideal of the final revelation and the ultimate reason behind Aaryan’s death is excellent even if it is a little far-fetched, and the execution could have perhaps been a little better. It’s still a clever and honestly shocking conclusion.   I found Mumbai Police to be a slick, well-packaged and modern thriller that’s definitely well worth a watch for both the storyline and the actors who emphatically bring their roles to life. And you can’t ask for much better than that. 4½ stars.