Savitri starred in both the 1964 Tamil Navrathri (dir. A.P Nagarajan) and the 1966 Telugu remake (dir. Tatineni Ramarao) and she is lovely as ever. What makes it particularly difficult to choose one over the other film is her leading men – Sivaji Ganesan (1964) and Akkineni Nageswara Rao (1966) – who each bring their own style to the proceedings. So I won’t pick.

That is so pretty with the Golu, the girls dancing and their sarees. The Telugu song is a bit more sparkly so I always pick that one.

Savitri is Nalina (Tamil) or Radha (Telugu). I’m going to just refer to her as Savitri throughout. After that lovely happy song, Savitri is told her father has fixed her marriage. She is already in love, and has no idea that her dad has unwittingly accepted a proposal from her boyfriend. Oh the drama. She runs to see the boy, only to be told he has gone to get married. She runs away, unable to face life as another man’s wife. Her character spends 9 nights wandering. She encounters different characters, all played by the leading man, who represent different aspects of human behaviour and emotion. These are named slightly differently in each film so I will just list them by night.

The film is more of an allegory than a realistic portrayal. Despite having lots of detail presented about who these men are, there is not a lot of depth to all the characters. The actors focus on the key emotion of the episode rather than trying to create nuances. Sivaji Ganesan is charismatic and is always instantly recognisable in this tour de force. ANR is generally better suited to low-key roles, but he also plays the various men as types. It is highly entertaining and stylised.

Night 1. A flamboyant widower interrupts Savitri as she contemplates suicide and drags her back to his house. Both ANR and Sivaji played this character as an eccentric, lonely man. The widower is devoted to his dead wife and little daughter (played by Kutty Padmini in both versions, I think). When compared flounce for flounce, there is little to separate the actors in this episode. I kept thinking of Snagglepuss. 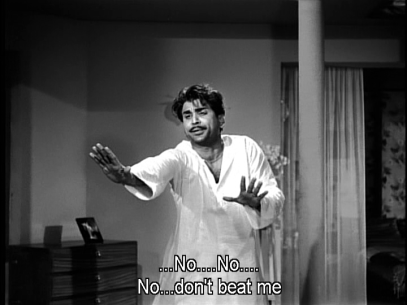 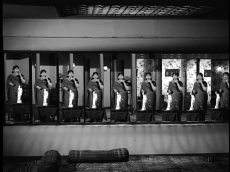 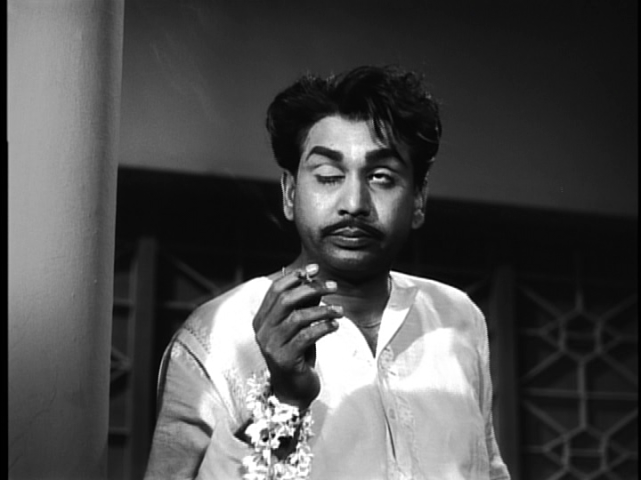 Night 2. Tricked by a brothel madam, Savitri has to fend off a drunkard with a sob story. Savitri is determined, fierce and has a good throwing arm. Sivaji played this role as a wild eyed, plaid pants wearing letch with mood swings. ANR did a gorgeous self-parody as a self-pitying Devdas and for that, he wins my vote. 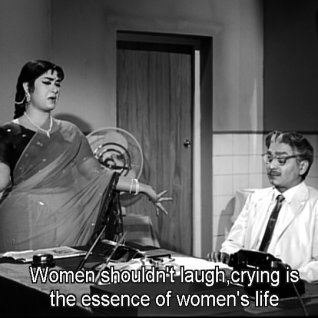 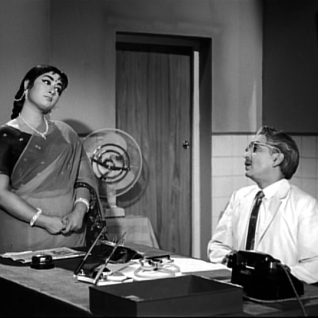 Night 3. Picked up by the police, Savitri is taken to a mental hospital. Both actors play the doctor as gently considerate and interested in why she was faking madness. I enjoyed ANR’s reactions to Savitri’s odd gesticulations and speeches. Sivaji is more of a generic saint in a white wig. Placed in a ward with several other women exhibiting different manias, Savitri joins in the various set pieces each inmate delivers and their song and dance medley. The Telugu patients (including Suryakantam, Chhaya Devi, Jamuna and Jayalalithaa) are funny and energetic, and I recognised most of the songs they used so I enjoyed their section a lot.  Manorama features in the Tamil film where the dancing and singing is more subdued but still fun. I’m usually averse to using the mentally ill as comedy fodder, but there was something good-natured and kind in this episode that helped me put my qualms aside.

Night 4. Frightened that the police had come for her, Savitri runs again. She meets a lurking gunman, out for revenge against the men who tortured and killed his brother. Savitri tries to persuade him to stop but he is killed by his enemies. It’s his character who has the most obvious demons to fight in this Navarathri. Both ANR and Sivaji play him with swagger and bluster. ANR had a little more vulnerability while Sivaji showed more of the wounded pride and ferocity. Both died spectacularly and both had to deal with interesting makeup and costumes. I guess it depends on whether you prefer a stripy t-shirt or a stripy lungi. 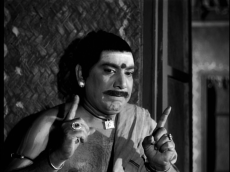 Night 5. Savitri contemplates suicide again. She is saved by a kindly villager and his sister who worry that she had been possessed by an evil spirit. A comedy conman arrives to fleece her poor but honest benefactors and Savitri decides to give him a taste of his own medicine. Nagesh originated the role in the Tamil verison while Relangi played in the Telugu film. I prefer Relangi in almost any role to Nagesh in most things! I think ANR does poor man with heart of gold so very well.  For this section, the Telugu film is the winner for me. 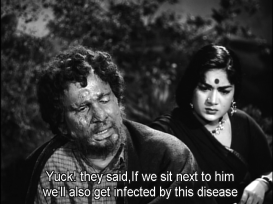 Night 6. Savitri sees an old man crawling along a path and goes to help. A formerly rich man, he is now a leper and shunned by all his family and associates. Savitri doesn’t let her revulsion at his physical state stop her from behaving with compassion and integrity. I really like that at around this stage in the movie, Savitri has stopped just passively absorbing help and is not only thinking about how to sort out her own life but is actively supporting other people. The makeup department were a bit more effective in 1966, and ANR does vulnerability so well. The Telugu film gets my points for this episode.

Night 7. A theatrical company is in need for an actress after theirs elopes. Savitri agrees to help them and the play goes on. I don’t think anyone can beat Sivaji Ganesan in Ye Historical Outfits and he looks like he has a ball in this turn as the rural actor/director. ANR is very good and his dancing has a higher comedy value, but the portentous dialogues flow so nicely in the Tamil film. Savitri is lovely in both films as she matches her leading man step for step.

Night 8. Whoever thought either of these men should wear short shorts should be given a severe talking to. Playing a policeman playing a hunter ANR and Sivaji both opt for a braying laugh, military bluff heartiness and those shorts. I think they used the same footage of the tiger in both films. Savitri masquerades as a man. She is not even slightly convincing, but her expressions are funny and her Telugu characterisation is enjoyably pompous. I think Sivaji’s shorts are both more terrifying (baggy, poor camera angles) and hilarious (baggy, poor camera angles). The Tamil film is a little more dramatic and better paced at this stage so I prefer that. 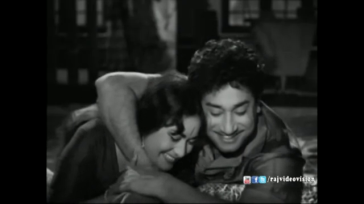 Night 9. In which we discover that intended groom/disappearing boyfriend Anand or Venu (Telugu) is of course Sivaji or ANR. Savitri has nice rapport with both actors and the reconciliation scenes were both funny and heartfelt by turn.  The wedding goes ahead and all the ‘other men’ turn up (except the dead gunman). Happiness prevails!

I slightly prefer the Telugu soundtrack by Chalapathi Rao T as it is a little more filmi and festive but the songs in the Tamil film are quite soulful so it does depend on my mood. I have the Telugu DVD with subtitles but have only seen the Tamil film without (it’s on Youtube). The stories are identical but of course, the dialogues will differ somewhat. Despite having different directors, there are only differences in a few scenes. It’s interesting to see so little of the second director in the remake – when I first saw the films I assumed AP Nagarajan did both.

I have some minor doubts. How did Savitri keep finding new sarees with impeccably tailored blouses? And she seemed to be wandering in circles yet no one could find her. But nothing detracted from enjoying her journey and her realisation that she could go home and be happy.

I really like both films, and have rewatched them a couple of times. Savitri is brilliant as Nalina/Radha and despite the focus being on the men, her performance is varied and her characterisation develops beautifully. Both Sivaji and ANR are in fine form and make the task of playing nine roles seem effortless. Choose your favourite cast, choose on language, choose the songs you like most, choose your own adventure! 4 stars!