I must have read about Apoorva Ragam before I bought the DVD but I’d no idea about the story when I finally sat down to watch it. And that’s definitely the way to approach this film.  It relies on unexpected twists to deliver a rather different take on college romance and knowing too much about the story beforehand would take away much of its appeal. It’s genuinely surprising and has a heroine who’s prepared to fight back which is always a plus, but there is a little too much sentimentality for me, especially in the final scenes. It’s still an enjoyable film though, and I loved the myriad twists and turns which made the second half of the film much better than the first.

Apologies for the rather blurry screencaps – the DVD plays much better in a DVD player than on my laptop!

Apoorva Ragam starts just like every other Indian college-based film with a group of guys discussing how to get their friend Roopesh (Nishan) hooked up with the pretty and popular Nancy.  Nancy (Nithya Menon) is bubbly and confident unlike the rather shy and quiet Roopesh but after some plotting by his mates Tommy (Asif Ali) and Feroz (Abhishek Raveendran), Roopesh gets admitted into Nancy’s circle of friends.

A little more contriving and Roopesh finally declares his love to Nancy which unsurprisingly she reciprocates in full.  One inane college song later and the two appear to be a happy couple without a care in the world – so far so very predictable.

Except that there is a cloud on the horizon as a guy on a motorbike turns up looking for Tommy and Roopesh, and he doesn’t look as if he out to give them career advice either.

In another hint that not all may be as it seems, Tommy calls Nancy’s rich father to tell him that his daughter is in a relationship with some loser guy at college.  Although he trusts his daughter and doesn’t put much faith in the anonymous phone call, Melipaire reacts by setting up Nancy’s marriage to his business partner’s son.  In despair Nancy turns to her friends for their advice and after a little more drama Tommy and Narayanan (Vinay Forrt) suggest that Nancy and Roopesh get married and present her father with a fait accompli.  Nancy doesn’t seem too keen on the idea, but like all good movie heroines, she does what the hero expects her to do and in no time at all the wedding goes ahead. 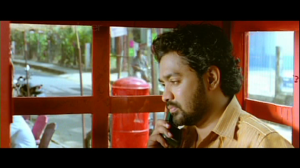 So far, the film is following an entirely predictable path and not even a particularly impressive one at that. But then Melipaire confronts Roopesh and just when I was expecting the big speech full of undying love and unswerving loyalty, the tables turn completely and the film takes off in a totally different and much more interesting direction.

From here on there is twist after twist and the pace of the film picks up considerably.  There are some very clever ideas and some more bizarre moments – like when Roopesh ends up on the runway as a male model! The three guys, Roopesh, Tommy and Narayanan, all interact well and keep the action snappy and focused for the most part.  There are only two songs and this is the better of the two since it features some excellent uncle dancing from the boys as they bond on a road trip.

But while the story becomes interesting there are almost too many plot twists so that by the time it gets to the final climax scene it’s hard to be surprised by anything.  The constant shock revelations make it hard to connect to the characters and in addition the three leads are more caricatures rather than the well-developed individual personalities the earlier scenes seemed to promise.  There is also no back story to explain why Roopesh, Tommy and Narayanan ended up together and became involved in the elaborate schemes which develop.  Santhosh Jogi’s brief appearance as Sethu, the guy chasing after Tommy and Roopesh, is also confusing as it’s never clear exactly how he knew them or how he knew about their plans.  He seems to be used more to showcase the ruthlessness of the three and their tight camaraderie rather than as a way to further develop their story.

Nithya Menon is excellent as Nancy and is particularly good when she asserts her decisive personality.  She makes the most of her role and apart from a little over acting at the end, delivers the best performance in the film. I always like it when a heroine does the sensible thing and runs when faced with a bad situation and Nancy passes the test with flying colours.  In comparison, Nishan is rather wooden as Roopesh and after his first brilliant scene with Melipaire, he seems to rely on just two facial expressions which both make him look as if he has eaten something disagreeable.  Asif Ali is much better as Tommy but once the action moves away from the college campus he is pretty much sidelined while Vinay Forrt has even less to do as Narayanan.  Nancy’s father also seems to be a bit of a wimpy push-over and his over sentimental speeches with his daughter don’t really fit with the rest of the film.

This is the only film I’ve seen by Sibi Malayil although I have more of his films in the pile to watch.  I’ve read that this was a departure from his normal style of film-making which makes me wonder if the under-development of the characters was more of a deliberate experiment and an attempt to create a more edgy atmosphere.  It doesn’t quite work whatever the reason as there isn’t enough meat in the story to allow for the lack depth in the three guys. I still enjoyed watching Apoorva Ragam but it’s not a film that bears up well to a second viewing since once you know what is going to happen the flaws in the characterisations are very apparent.  As a one-time entertainer though it works well, and it does deliver as advertised – “an unusual story about love and…” 3 ½ stars.