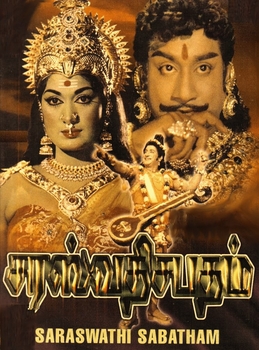 When I started watching films which dealt with the classical stories involving Hindu Gods and Goddesses, I noticed a number of parallels with the legends I heard as a child growing up in Ireland. There are many books and articles which deal with the similarity between the two cultures, but every time I watch one of these films it strikes me all over again and is probably one of the reasons why I love these mythological films. The lavishness of the sets and the stunning costumes are other reasons to watch and enjoy but I really do appreciate the stories and the opportunity to learn more about the Hindu pantheon of Gods. A. P. Nagarajan made many successful mythological films in the sixties, and I’m hopeful that after the recent success of the restored classic Karnan some of Nagarajan’s films will get the same treatment and become more readily available with subtitles.

Saraswathi Sabatham is a little different from the other Tamil mythological films I’ve seen, as it uses a fictitious plot rather than stories from the Sanskrit epics. It still draws on the personalities and traits of the various Gods and there is a strong message behind the narrative but it’s a simple story which is charmingly told. The film opens with a lovely song featuring the Goddess of Knowledge, Saraswathi (Savitri) and her attendants.

Trouble enters into this beautiful and peaceful scene in the form of the sage Naradha (Sivaji Ganesan) who goads Saraswathi by claiming that wealth is more important than knowledge. After successfully riling Saraswathi, Naradha heads off to confront the Goddess Lakshmi (Devika) and again causes trouble by telling her that knowledge is more important than wealth. After successfully starting a rivalry between the two Goddesses, Naradha then adds the Goddess Parvati (Padmini) into the mix by claiming that wealth and knowledge are both more important than bravery. Despite some rather lacklustre protests from their husbands, Brahma, Shiva (Harnath) and Vishnu (Sivakumar), and even though they know that Naradha is a renowned trouble-maker, all three rise to the bait. Saraswathi, Lakshmi and Parvati each vow to make a champion for their cause on Earth and prove that their attribute is the most important while making the other two champions bow down before the winner. 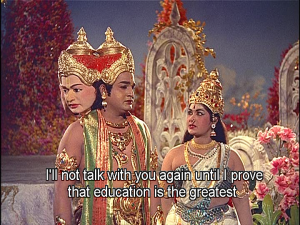 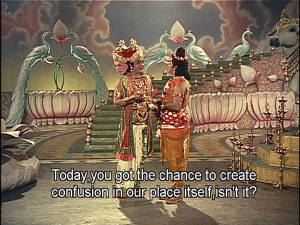 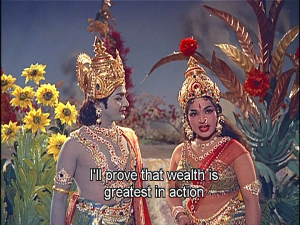 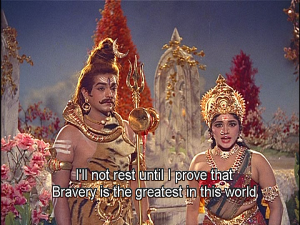 Generally the different aspects of the three Goddesses are well depicted with Savitri appearing regal and dignified as Saraswathi. She conveys a sense of timeless wisdom in her manner, although still storms off in a huff when she gets annoyed with Naradha. Devika’s Lakshmi is playful and charming while Padmini is motherly to her children but feisty enough to challenge Shiva before Naradha intervenes with his teasing. The three Goddesses are also incredibly sparkly and although Lakshmi manages to out-glitter the other two it’s a close run contest. 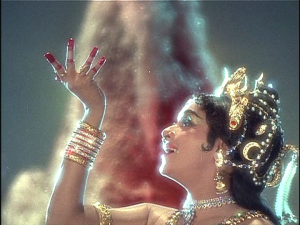 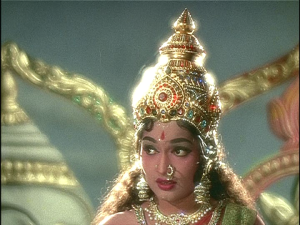 Saraswathi chooses the mute son of a temple singer to be her champion. She gives Vidyapathi the power of speech and the knowledge to make him an accomplished poet who can sing her praises throughout the kingdom. 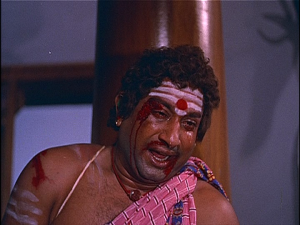 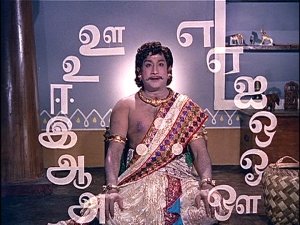 Coincidently choosing the same kingdom, Lakshmi uses her power to make a poor beggar girl queen. The ailing king, who has no heir, decides on a method of selecting his successor which will not open him to claims of favouritism. Acting on advice from his chief minister he gives an elephant a garland and decrees that the person garlanded by the elephant will be the next ruler. As he says, this is the perfect plan that no-one can object to – except perhaps the elephant who has to chase around after Selvambikar and then throw the flowers over her head. 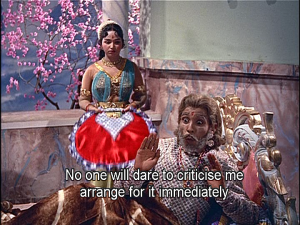 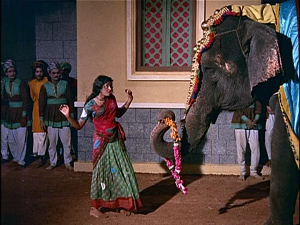 Finally Parvati takes a total coward, Veeramallar (Gemini Ganesan) and turns him into a brave and fearless warrior, who quickly rises to be the new army chief as a result of his prowess in saving the queen when her horse bolts. 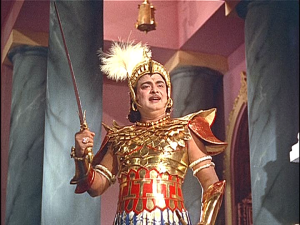 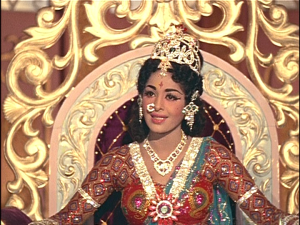 Vidyapathi, Selvambikai and Veeramallar all squabble amongst themselves as the three Goddesses jostle for power. Each character is full of their own importance and their arrogance is well portrayed by the three actors. Sivaji Ganesan is excellent as Vidyapathi. His transformation completely changes his personality and he is wonderfully condescending and self-righteous as Saraswathi’s champion.

K. R. Vijaya is beautiful, and her change from the poverty stricken beggar girl to haughty queen is just as convincing. Her Selvambikai still has an air of vulnerability despite her arrogance and pride which makes her the most sympathetic of the three and she does also get to wear some lovely sparkly costumes. I almost didn’t recognise Gemini Ganesan here compared to the young romantic in Kalyana Parisu but he has plenty of screen presence as the blustering warrior, although his character doesn’t have quite as much background as the other two. 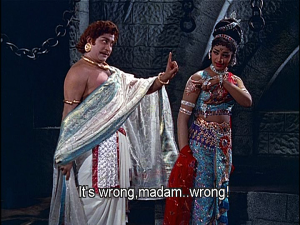 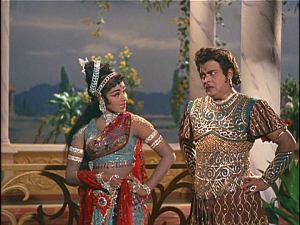 There are clashes between Vidyapathi and Selvambikai as the poet refuses to sing in praise of the queen. More clashes occur between Veeramallar and Selvambikai as the warrior oversteps his authority, while Vidyapathi and Veeramallar are at odds from the moment they meet. Each embodies the attribute of their patron Goddess and none of them are prepared to back down. Of course it all gets resolved with a suitably moral ending, but it’s the conflicts between the various characters that make the film so entertaining. Plus the chance to see Sivaji Ganesan in a pink outfit with matching pink outfits for his guards. 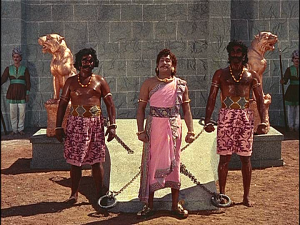 The sets are fantastic and Lakshmi’s heavenly abode is incredibly golden and extravagant. Naradha walks through the clouds (although the rainbow he stands on isn’t one found in nature), and while there aren’t very many other special effects, they tend to be well used – such as when letters appear as Vidyapathi sings about his new ability to speak. 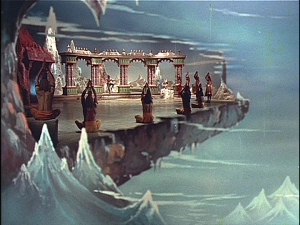 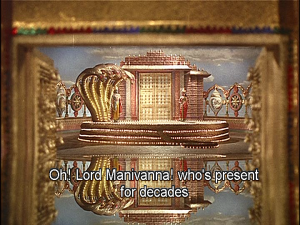 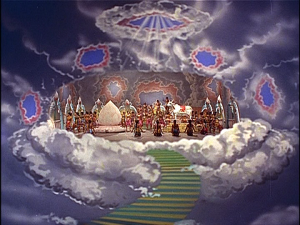 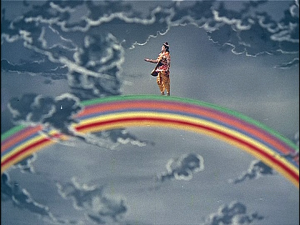 There is a comedy track featuring Nagesh and Manorama which fits into the story although Nagesh’s character is more successful. Unfortunately subtitles don’t really convey Manorama’s speech patterns which are the basis for the humour in her character.  All the lead actors are excellent but Sivaji Ganesan really stands out as both Naradha and Vidyapathi. He has some wonderful expressions and a real twinkle in his eye while he teases everyone as Naradha, and he keeps the character light and mischievous. He has the same liveliness as Vidyapathi but gives a sense of smugness and conceit rather than the teasing nature of Naradha and his anguish and despair as the mute temple worker praying to Saraswathi is very moving. 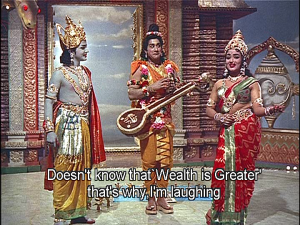 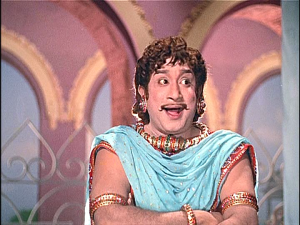 The music by K. V. Mahadevan is beautiful and the lyrics by Kannadasan work well even in their English translation. As always I would have liked a little more dancing, although there is a short piece of Bharatanatyam by Padmini to enjoy. It’s probably not a film for everyone’s tastes as the story develops slowly and there is a lot of wordy interplay between the characters to establish the conflict. However for fans of Tamil mythological films, A. P. Nagarajan takes a simple story and aided by excellent performances from his all-star cast makes Saraswathi Sabatham an entertaining and appealing watch.  3 ½ stars. 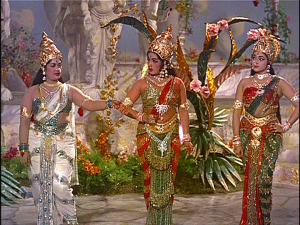