Going to see Mayakkam Enna was a whole new adventure since not only did the film not have subtitles, but it was also showing at a cinema somewhere out in the suburbs on a university campus. Thankfully I found my way to a very bijou but comfortable cinema and was very happy to discover that they sold plenty of snacks at half time – I will be back!

I expected a lot from Mayakkam Enna since the team of Dhanush and his brother Selvaraghavan have made some of my favourite Tamil films together. And I wasn’t disappointed. My only complaint is that I really did miss subtitles for this one. The audience were laughing and applauding for a lot of the dialogues and I wanted to know what was being said to get such good reactions. 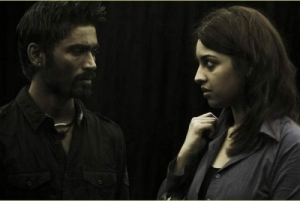 Karthik Subramaniam (Dhanush) is an aspiring wildlife photographer with a supportive group of friends, who all appear to live together in a house with its own bar. Excluding the bar, I could really relate to this, as I had a similar set of friends back in my final undergraduate year. We all lived together and went everywhere as a group so I had an idea of the changes caused by adding a new person to this dynamic.  Karthik’s best friend is Sunder (Sunder Raman) and as expected the gang aren’t too welcoming to his new girlfriend Yamini (Richa Gangopadhyay).To make things worse, Yamini and Karthik don’t get on at all and constantly dig at each other. While I missed the dialogues that generated a lot of laughter from the audience, there were a few barbed comments that really didn’t need translation as both Richa and Dhanush did a good job in getting their feelings across.

Over time however their enmity turns to attraction, leading to a love triangle with Sunder blissfully unaware of his girlfriend’s change in her attitude to Karthik .

Meanwhile Karthik is slowly compiling a portfolio of wildlife shots in between running around taking pictures of weddings and tourists at local temples. His role model is award winning wildlife photographer Madhesh Krishnaswamy (Ravi Prakash) and Karthik is determined to get a job with him to learn from the best in the business.  However Krishnaswamy has no interest in nurturing Karthik’s career and repeatedly sends him away with scathing comments about his work. I have to admire Karthik’s persistence as he gets no encouragement whatsoever from his hero but still keeps trying to get that elusive ‘perfect picture’ which will persuade Krishnaswamy to give him a job. The shots in the countryside are absolutely stunning here and cinematographer T. Ramji captures the wildlife flawlessly. These visually stunning moments are in sharp contrast to the much more claustrophobic scenes between Karthik, Yamini and Sunder and this accentuates the tension in their relationships well.

The first half of the film concentrates on the love triangle and despite the subject matter, there are plenty of light hearted moments along with the drama of the relationships. The pace is fast and the dialogues seem snappy and well suited to the action. The second half is much darker as it documents Karthik’s slide into alcoholism and his emotional breakdown as he is unable to come to terms with the events that unfold. While this part of the film is slower, it does feature an excellent portrayal of despair by Dhanush, although he is matched by Richa’s fantastic depiction of a loyal and long suffering wife. 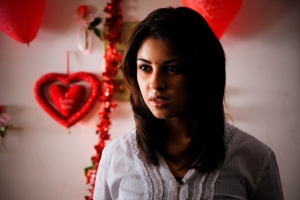 Although this is Richa’s debut in Tamil cinema, her previous performances in Telugu films have been impressive and she is even better here in a role that seems to have been made for her. The two actors have plenty of empathy together and each complements the others performance.  Apart from Sunder none of the other actors get very much screen time but all seemed to do well enough in their roles. 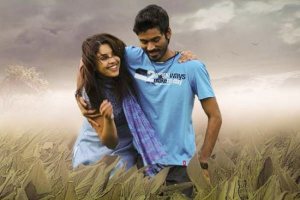 While Mayakkam Enna is in some respects a typical Selvaraghavan film, focusing as it does on darker emotions, Karthik is a much less damaged lead character than I’ve seen in his other films. Karthik doesn’t appear to have had an abusive childhood and is a well-liked and popular person with a large and warm circle of friends. This makes his descent into depression and substance abuse all the more shocking since he does have a strong support network. It also makes him a more realistic and sympathetic character, although in reality I don’t think anyone would have put up with his self-pity for quite as long as they did here.

The music by G. V. Prakash Kumar is another high point of the film, particularly since Dhanush sings on two of the tracks. I loved the soundtrack when I first heard it, and the songs fit well into the film, althoughI think the picturisation of Kadhal en Kadhal is a little strange. I loved the cartoon characters in Voda Voda though and this is a great song.

While the film does become overly dramatic in the second half it’s still enjoyable due to the strong performances. But please, someone take that long-haired wig Dhanush wore in the closing scenes and burn it! It’s terrible and really doesn’t suit him at all. That aside, Mayakkam Enna is definitely worth watching on the big screen and both Dhanush and Richa are fantastic. I think that with subtitles this could become one of my favourite Dhanush films – I loved it.