Thalapathi was one of the first Tamil films I saw. It was before my ‘Southern Film Industry Addiction’, I barely knew who Rajnikanth was and had absolutely no idea about Mammootty. In fact I’d totally forgotten he was in this film until I rewatched it recently – thankfully I know much better now.

Written and directed by Mani Ratnam, Thalapathi is at heart much more of a masala film than his usual fare. It features most of the necessary ingredients: an abandoned child, perpetually teary mother, romance, brothers who don’t know they are related, the essential Amrish Puri as the villain and a significant article of clothing. Add to that plenty of action and fight scenes, great songs, and beautiful cinematography, plenty of classical references and it all adds up to a very full 2 and a half hours of cinema.

The film starts in black and white with a young unmarried girl giving birth during the festival of Bogi. The opening scenes of Kalyani’s rejection by an older woman and shots of the rural countryside serve to explain that her child has no future in such a traditional community. She puts the baby into a train in the hope that somehow someone else will give him a better life. These opening shots are some of the best in the film and it’s a shame that my copy of the DVD seems to have lost the original quality. 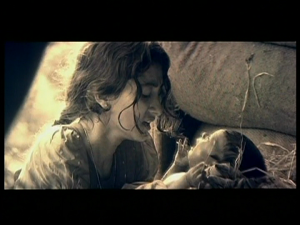 The colour kicks in with the year of 1987 when the baby has grown up to be Surya (Rajnikanth). He is a man with a firm belief in justice who is determined to help others in his community in any way he can. This often seems to be by beating senseless an offender and in the course of such action he ends up fatally injuring Ramana, one of Devaraj’s men. Enter Mammootty in a very well played role as the head of the local gang of rowdies, who initially threatens Surya with dire consequences if his man dies. 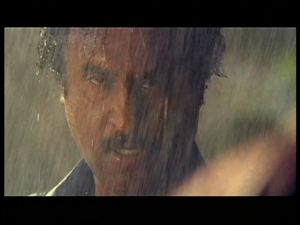 However when Devaraj finds out Ramana’s crimes, he arranges for Surya’s release from jail and tells him that his actions were right and just. I can’t say that I agree with his assessment but it makes Surya become his loyal Thalapathi and the two become inseparable. Lots of drama here, so time for a song break.

Surya’s charitable reputation helps to legitimise Devaraj’s rather more shady one and they soon rule the entire area, much to the displeasure of Devaraj’s rival Kalivardhan (a dubbed Amrish Puri). There is bad blood between these two and it’s inevitable that there will be a clash. However most of the story concerns Surya’s relationship with Devaraj and sadly Kalivardhan is only seen occasionally throughout the film. Amrish Puri in a really terrible pair of glasses isn’t as menacing as usual but manages to be evil enough just when it really counts. 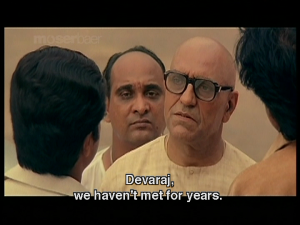 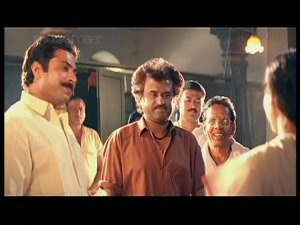 In the course of his good works, Surya meets Subbu (Shobana), a Brahmin girl who falls in love with him. Perhaps it was the wolverine hair-style or the commanding way in which he demands her jewellery but she’s obviously quite smitten.

Her father wants nothing to do with a thug who has no idea who his parents were and rejects the match. In the middle of all this, Surya’s real mother ends up moving to the area when her legitimate son Arjun (Arvind Swamy) is appointed as a Collector. Kalyani has married a very understanding man who knows all about her first baby, although Arjun doesn’t know that he has an elder half-brother. The two brothers have a common sense of justice but in every other way are complete opposites. Arjun is a good and law-abiding man who is committed to cleaning up the town, although perhaps he should have started with the police corruption rather than take on the town rowdies. There are inevitable clashes between Surya, Devaraj and the police as Arjun tries to stop their version of law and justice in the town. And Kalivardhan is luring in the background adding in his malicious attempts to get rid of the pair as well. Finally the significant cloth comes to light but Surya refuses to give up his friendship with Devaraj despite discovering his brother.

Although there is plenty of action in the film, the main focus is on the relationship between Surya and Devaraj. Mani Ratnam has based it on the friendship between Karna and Duryodhana from the Mahabharata and there are a number of references to this story throughout the film. It starts out with Devaraj as the leader and Surya as the faithful follower, but as their friendship develops they each begin to change the other and the dynamic between the two has altered by the final scenes. Both Rajnikanth and Mammootty are both excellent and work well together to bring their friendship to life. It’s mainly in the little touches, such as the way they only have to look at each other to acknowledge their next venture.

Surya’s relationships with his mother, Subbu and others are important to the overall story but his character is defined by his strong sense of justice and unwavering support of Devaraj, no matter what. Even when Devaraj persuades him to marry Ramana’s widow Padma, Surya is unable to say no. Rajni has plenty of action scenes and is exuberant in these, but he also makes the most of his more dramatic moments. So much is conveyed in one particularly memorable scene in the temple, where both Suyra and Kalyani both look yearningly towards a train as they hear the distant whistle. They are both standing close together but neither have any idea who the other is and their obvious sadness is all the more poignant as a result. 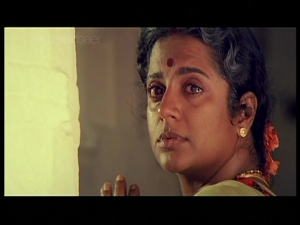 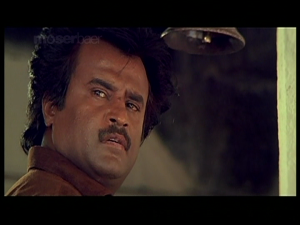 Mammootty is more restrained in his role as Devaraj relies more on fear and his entourage rather than actual physical violence. He has Surya for all of that after all. His portrayal of the more corrupt and devious Devaraj is excellent and he brings a real sense of authority to the character. The other members of the cast are all very good in their supporting roles, especially Srividya who is convincing as the mother who can never forget the child she lost. I was surprised that she had told her husband about her first baby, but Jai Sankar brought a lot of compassion to his role as Arjun’s father and was very credible as a supportive husband and father.

The other standout feature of the film is the music by Ilaiyaraja. The sad Chinna Thayaval is beautiful and recurs as background music throughout the film. The other songs are all upbeat with some great dancing and I wasn’t surprised to see that Prabhu Deva was one of the choreographers.  The rather different Sundari Kannal is interspersed with some Samurai action and seems to be a tribute to director Akira Kurosawa. I haven’t included it here as it is very long and I’m a little concerned about the horses in some of the fight sequences but Rajni in a top knot is definitely worth a look. 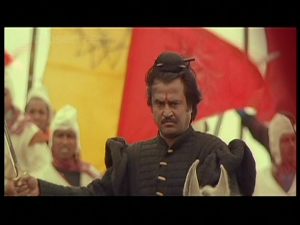 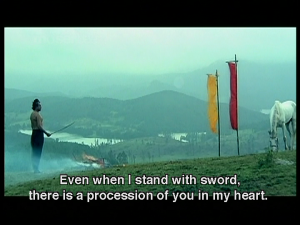 The only issue I have with this film is that it is very violent in parts. The first fight scene with Ramana and the episodes of police torture are quite graphic and go on just a bit too long for me. But to counter that, the two leads are fantastic and really at their best, the music is beautiful and memorable, and it’s a very well told story. 4 stars.

Temple says: I like watching earlier Rajni films (and this is the 90s) as it reminds me just how good an actor he is, legend status aside. I have recently watched Darna Veera Suura Karna, so the story was fresh in my mind and I think this translation to modern gang empires was very effective. Deva and Surya are full of certainty and righteous power, and stride through the landscape looking larger than life. Mammootty and Rajni are brilliant and play off each other so well, and that’s a good thing as other elements of the story are underdone. Deva’s gang members were just a vague presence, and I don’t think I recall any of their names. They were just there for contrast and to portray Deva’s court of followers. The female characters are strong in concept but weak in presence apart from a couple of key scenes. Shobana was lovely as Subbu, which is all that was required of her,  and Bhanupriya gave an excellent and near silent performance as Padma. Srividya was good but her character was quite static and she didn’t do much more than weep so I was left wanting to see more from a woman who clearly had a complex situation to navigate. I admired Santosh Sivan’s artistry as he used light and camera angles to create a feeling that these men were almost forces of nature, and the landscapes were stunning. The fight scenes in the rain were lovingly filmed to capture the beauty of the splashing water and the bodies were more of a method of breaking the trajectory of the showers than the object of the scene. I don’t think it’s an overly violent film as many of the gory scenes are shown as aftermath rather than explicit or graphic scenes of how people got into that state. What was explicit was also shown to have consequences so it isn’t mindless violence either. It all fit into the relationship of Deva and his general with their warlike mentality. I don’t love the soundtrack, but I do like it well enough and thought most of the slower songs were excellent. I was ready to stick a fork in my ear at the umpteenth reprise of Chinna Thayaval but I blame Mani Ratnam for that as it was just relentless and overused. It’s a great action infused tale of loyalty and conflict, it looks stunning, and it features two of the best actors working in Indian cinema. 4 stars from me!